Taking on the Sahara with a Rover P6 V8 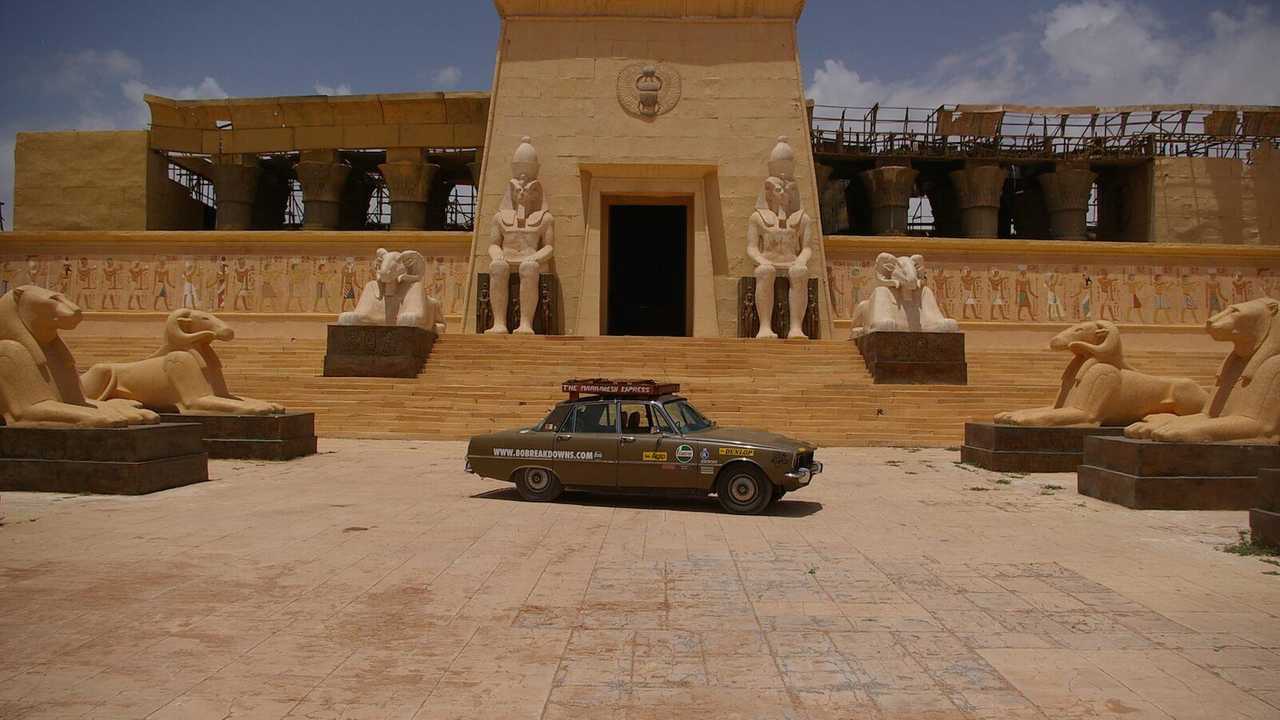 The Rover P6 V8 remains well versed in the art of overheating, so driving a cheap one to the desert sounds like a solid idea… doesn’t it?

‘It’s a small world’ is one of the English language’s more overused sayings. However, when you look at a map and see that, from the UK, Africa is merely a couple of ferries and a 600-mile drive away, you’ve got to admit there’s more than a little truth in it. A rather inspirational amount of truth, in fact.

Faced with a washout British summer, the fact that a few days’ travel could deposit us in the Sahara proved impossible to ignore. A plan was hatched; how about a two-week drive to Morocco, to cross the High Atlas Mountains and visit the Sahara? Why not!

As with all good plans, a car was needed. A car that could cope with the Saharan heat and run in the rarefied air of the High Atlas, nearly 3km above sea level. For some reason, we employed a Rover P6 V8. Hey, it seemed like a good idea at the time...

Given these exacting challenges, maybe buying a Rover P6 online while in the pub wasn’t the best idea. This observation was borne out when I tried to drive the car home and it insisted on running on only two of its eight cylinders, before depositing me on the hard shoulder. But some TLC ensured it was a much happier vehicle that rolled onto the ferry to Spain a month later and then, having crossed Spain, boarded the ferry from Algeciras to Africa.

Entering Morocco, the usual collection of hustlers surrounded us, eyeing us opportunistically and hoping to profit from our presence. Avoiding them, we got our passports stamped and arranged a temporary import for the mighty Rover, then began to dodge donkeys, pedestrians and Mercedes grand taxis as we headed south on the rough tarmac.

Several hours of boiling, signless towns and twisting mountain roads took us to Chefchaouen. We explored the steep, bustling streets before heading to the campsite – where the Rover refused to restart. We guessed the problem was fuel vaporisation caused by the heat, and after leaving the engine to cool down it ran fine, much to our relief.

We reached Fez the following day. The drive took us through spectacular gorges before crossing rolling, empty arable land for hours until we reached the city’s labyrinthine alleys. In this maze of cobbled streets and high walls, 150,000 people live twisted together beneath the burning sun.

The last cluttered remnants of the city disappeared behind us the next morning as we headed south towards the Atlas Mountains – the highest mountain range in North Africa, reaching over 4000 metres above sea level. We planned to complete a 140-mile crossing of the range, starting at the delightfully named El Kebab before climbing to an overnight stop at Imilchil, then dropping down to the Todra Gorge the following morning.

However, even before we reached El Kebab, as the road climbed enthusiastically upwards, the engine spluttered and lost power. We coaxed the Rover to a spot of shade beneath a tree, and investigated. The air temperature was well into the 30s, and as the car’s cooling system clearly wasn’t coping well with the situation, we gave it all the help we could.

Off came the grille, number plate and bonnet insulation to increase the airflow. The breakdown had been caused by the carburettors overheating and vaporising the fuel before it could reach the engine, so we insulated the fuel lines as best we could, using the heat shield from a camping stove. After half an hour, we were ready for Rover vs the High Atlas, take two.

The road climbed higher, and soon we were travelling across sweeping plains two kilometres above sea level. The surface beneath our wheels was potholed and broken, and quickly shook the exhaust loose. The plains soon merged into the mountains proper, and the gentle gave way to the jagged as the conglomerate mountains of the High Atlas proper rose dramatically around us.

With the peaks came more steep ascents and areas of rough gravel where flash floods had swept away the road, and as evening came we were over 2000 metres up, crossing our fingers that the car would get us to Imilchil before nightfall. It nearly managed the task, but the last, steep ascent to the high plateau on which we planned to spend the night was just too much. High underbonnet temperatures brought us to a standstill for a second time.

Half an hour later we were chugging upwards once again, the road clinging to the side of a mile-deep chasm that drew our attention as the sun sank into the mountains behind us. Dusk was all around as we pulled into Imilchil and found a room for the night, whiling away the time discussing Islamic marriages and mule prices before sleep called.

Morning dawned bright as we boarded our steed – which we now knew had cost us the same as a decent mule – and carried on south. A livestock market had taken place in the village that morning, and we shared the mountain tracks with a variety of vans, all with a selection of bemused goats or sheep balanced in cages on their roofs.

The road rose to 2700 metres before the mountains gave up trying to stop the Rover’s progress. Now, we could coast down into the otherworldly Todra Gorge. This snaking alley of soaring rock terminated at a selection of cafés nestling beneath beautiful, sweeping walls of granite.

The Rover had survived the mountains, but on the fringes of the Sahara another obstacle loomed. The temperature climbed beyond 40°C as we cruised into the desert, and the in-car temperatures quickly became unbearable. We spent the night at Skoura, an oasis town that once hosted epic camel trains as they emerged from the Sahara. During our visit the place was virtually deserted, and the mosque’s call to prayer rang out across an empty twilight of ruined kasbahs and lonely palm trees.

Sunday brought cloud, which instead of lowering the temperature only added to the humidity. We headed to Ouarzazate, where we toured the Atlas Film Studios, driving across sets from films as diverse as Gladiator, Black Hawk Down and Seven Years in Tibet, before heading to the ancient hillside settlement of Ait-Ben-Haddou.

Exploring the twisting alleys and mud-coated buildings was like going back in time, yet the heat was unrelenting. We decided to head back across the mountains to Marrakesh the following day – but not before we’d re-routed the screenwash system to spray water over the carburettors, hoping the evaporation would keep them cool enough to survive the long, slow climbs of the High Atlas.

Although we left early the following morning, the temperature was already approaching 40°C. The driving conditions were better than we had encountered on our southward crossing a few days previously, but the road still reached 2100 metres above sea level as it baked beneath the omnipresent sun.

As we gained altitude, dicing with grand taxis, tour buses and crawling trucks, the engine temperature rose. However, the ad-hoc carburettor-cooling system meant that, thanks to a squirt of water every kilometre or so, we didn’t experience the fuel-vaporisation issues that had plagued our previous attempts to drive uphill.

The brakes weren’t so fortunate, though, and shortly after we’d crossed the high pass the pedal went straight to the floor. This necessitated a café stop to allow things to cool down, before we coasted back down almost to sea level. Ahead lay Marrakesh, and by mid-afternoon we had located the town’s old medina and found a riad in which to stay the night.

Marrakesh’s old town is like no other; a living pantomime that gives your senses no respite. By day, you take centre stage as you explore the twisting souks. Every stallholder eyes you opportunistically as you studiously feign disinterest, for interest is something that will be latched onto as a means of coaxing open your wallet.

The cries ring out around you: ‘Bonjour’; ‘Come look at my shop’; ‘Good price for you’. Locals fly through the twisting alleys on motor scooters, donkeys wander through the melee and life takes on a frantic intensity.

At night, the tempo only increases. Djemaa El Fna square in the centre of the medina becomes a caricature of the past. Snake charmers, performing monkeys, musicians and storytellers compete for attention, and a swathe of food stalls compete for business: ‘Come, my kebabs are the best in town’; ‘You’re from England? Here, my food is bloody marvellous’.

Aromas drift through the balmy air: mint tea, spices, tagines, blocked drains. Everything animates with a vibrant rhythm, a liveliness that assaults your senses. Day or night, every extreme of life competes for your attention with each step you take.

Leaving Marrakesh, we headed for Casablanca, dodging stray dogs and bored mules as we went. The Rover seemed happy to be moving towards more temperate climes, growling along the smooth tarmac without a complaint. Inside the car the cooler air was most welcome, but open windows and cold drinks were still essential to preserve sanity.

Casablanca turned out to be as we’d imagined; a dull commercial centre that four million people call home, and which held little of interest to us other than the Hassan II mosque – the largest in the country, built by its modest namesake as a 60th birthday present to himself.

In spite of its bold size and obsessive detailing, I found it strangely underwhelming. In a world where skyscrapers are completed somewhere on the planet every day of the week, the impact of a recently completed, self-congratulatory, 200-metre-high minaret is somewhat negated.

We left dull-but-businesslike Casablanca for Rabat, where we passed the evening taking in the ‘real’ Morocco. Tourists were non-existent, and instead of souvenirs the souks sold the essentials for everyday life. No one hassled us; we were blissfully invisible. And all around us, Moroccans went about their everyday lives, rather than competing for our attention through displays of drama or helplessness.

The road north from Rabat took us past a few pleasant ex-fishing villages, which had become beach venues for Morocco’s middle class as well as plenty of fellow Europeans. We stopped in a few of these relaxed places, enjoying the cool sea air, clean streets and old forts around which they were invariably centred.

And then we hit the road again and reached the port of Ceuta, where our 1100-mile lap of Morocco ended as we boarded the ferry back to Europe. England was only another 600 miles of tarmac and a ferry across the Bay of Biscay away.

Gallery: Taking on the Sahara with a Rover P6 V8