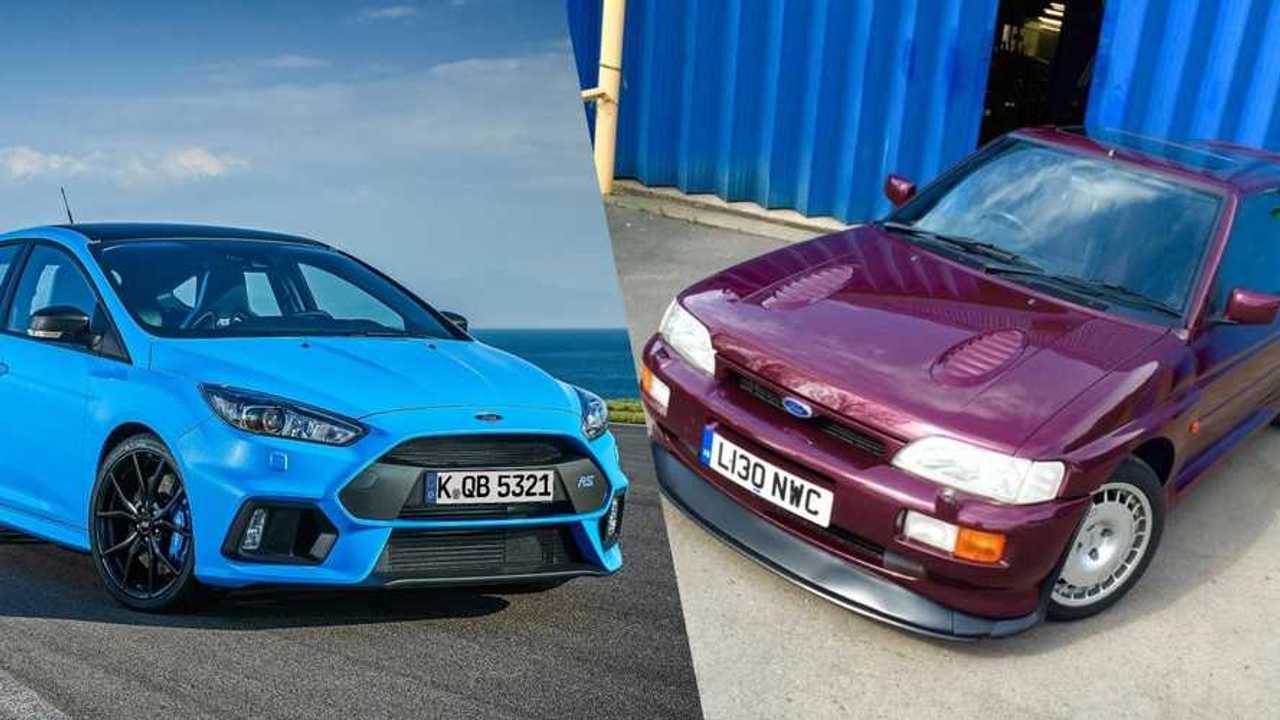 The recently discontinued MK3 Ford Focus RS is destined to become a future classic, but should you buy an Escort RS Cosworth instead? We find out...

Fast Fords are something of a religion amongst many enthusiasts of affordable performance cars. Over the decades the blue oval has delivered a long line of attainable heroes that punch well above their weight, and often bloody the noses of sports cars deemed superior by the elite.

Ford’s recently departed MK3 Focus RS was the latest generation of hot hatchback to offer serious bang for your buck, but it was by no means the first Ford to employ all-wheel drive and a sizeable turbo to dethrone the boss’ company car. The Ford Escort RS Cosworth was the people’s champion of 1992.

There’s little doubt that the 2015 Focus RS will become a future classic. In the second ‘golden age’ of hot hatchbacks it was one of the definitive cars. It did battle with equally impressive competition such as the FK2 Honda Civic Type R and Renaultsport Megane, but it’s the Ford that took the crown.

With 345bhp, a 0-62mph sprint of 4.7 seconds, and a Ken Block inspired Drift Mode, many people paid above list price to secure this RS. Today its residual values are holding strong with the final orange Heritage Edition cars - that hark back to the Escort Mexico - selling for a premium. One of the final examples was even listed for £100,000 ($127,000).

However, for those who preceded the Playstation generation, the Escort RS Cosworth is their era defining fast Ford. Serving to homologate the Escort for WRC, this model was actually an evolution of the monstrous Sierra Cosworth that came before it. The rally car went on to win the 1994 Monte Carlo Rally, spawning this 1994 Cosworth Monte Carlo special edition of which you see here. It’s just one of 70 examples ever made and is distinguished by its Jewel Violet paintwork and OZ alloy wheels.

To look at, both cars are far from subtle — especially the Focus RS in its signature Nitrous Blue. However, there’s no denying that the Escort steals the show with its enormous spoiler and swollen bodykit that left local law enforcement twitching. Could Ford have made the newer car a greater assault on the eyes? Yes, but then less people would have bought it, and unlike the Escort Cosworth, the Focus RS wasn’t a necessity for homologation… They actually needed people to buy them! Both Fords strike a purposeful pose, although one is certainly more politically correct than the other.

The Achilles heel of the Focus RS has always been its relatively low-rent interior trim. Its bolstered Recaro seats serve their purpose well, but cheap plastics and an uninspired design left people wanting more from this top-flight RS. The Escort shares that trait with a rather pedestrian dashboard forming a baron landscape. Its only redeeming feature is a cluster of turboboost gauges that hints at what’s under the hood.

Underneath those menacing bonnet vents, the Escort Monte Carlo harbours a turbocharged 2.0-litre four-cylinder engine developed by Cosworth. This WRC inspired motor sends power to an all-wheel drive system via a 5-speed manual transmission. 227 hp as at the disposal of both car and driver.

Back in the Nitrous Blue corner, the Focus RS makes use of Ford’s latest turbocharged 2.3-litre EcoBoost engine that’s shared with the Ford Mustang. An intelligent all-wheel drive system, that incorporates Haldex clutch packs, can shift power to the front and rear as well as from one side of the car to the other. It’s this torque juggling that gives this car such a broad range of capabilities.

Hitting the road in these mean machines immediately reveals the Focus RS to be the more civilised car in terms of refinement and comfort, whereas the Cosworth doesn’t really give a damn in comparison. That said, you’re not reading this to find out which of these cars is better to drive too the local supermarket — it’s the Focus RS — so let’s get on with it, shall we?

It’s fair to say that the Focus RS has an inherent whiff of turbo lag, but the second it’s spooled up, you’re off! The acceleration will have you thrown back in your seat in a manner more akin to a sports car than a family hatch. However, it’s through the bends where it impresses most.

Charge towards a corner with fire and fury shouting from those exhaust pipes, then put those precise and feelsome Brembo brakes to work. Crackles erupt from the exhaust on each downshift curtesy of the 6-speed manual box’s precise motion. This drama precedes the moment you pitch in aggressively for a corner to see if your confidence in the chassis is rewarded. It’s keen to get its nose in to the apex, aided by a torque vectoring system, and you can really feel the weight transfer around the car as the bend tightens. The Focus’ clever chassis figures out the best distribution of power before it simply grips and goes.

Driving the Focus RS hard is a thoroughly addictive sequence of events that will have you hunting down challenging roads just for the fun of it. Not only is this car one of the fastest road-legal means to cover undulating Tarmac, but it’s also one of the most thrilling.

The Escort RS Cosworth comes from a different era where you don’t have the aid of an on-board computer to stop you from spearing off the road. However, its more mechanical method makes it a very communicative car to drive quickly. The turbo lag is almost comical as you light the fuse and wait for the turboboost needle to twitch. A sudden surge of boost arrives with a thump, and the car quickly disappears down the road.

It doesn’t have as much power as the Focus, but it also doesn’t have as much weight to lug around with it. To get the most out of this hatch you need to really feel for what’s going on beneath you. Trail the brakes into a bend to shift the weight forward and get the back light, pivot the car, then start feeding in the throttle to get the nose to pull itself around the bend. You can easily trim the angle of attack with the throttle, something that makes the Cosworth surprisingly predictable and easy to manage.

Of course, driving the Escort is a more physical experience than the Focus thanks to far less steering assistance. The car will also leave you clenched at the very moment you realise the engine performance far outweighs stopping power. It feels a little dangerous when really pushing, but I guess that’s what ultimately makes it exciting.

What we have here is two variations of the same recipe. Take a mainstream model, add performance, allow to simmer with anticipation, and watch it be adored by the masses. The key difference is that the Focus RS takes full advantage of the technologies of today to not only allow you to drive faster, but faster with greater ease. For many that is a huge bonus because it means that you’re less likely to throw your new pride and joy into a tree.

That said, as reassuring as the new technology is, a vehicle that challenges you on a daily basis is the one that delivers a better driver over time. In a way that perfectly sums up why we would buy an Escort Cosworth… Every time you turn the engine off you feel like the car has got the best out of you, as well as you getting the best out of the car.