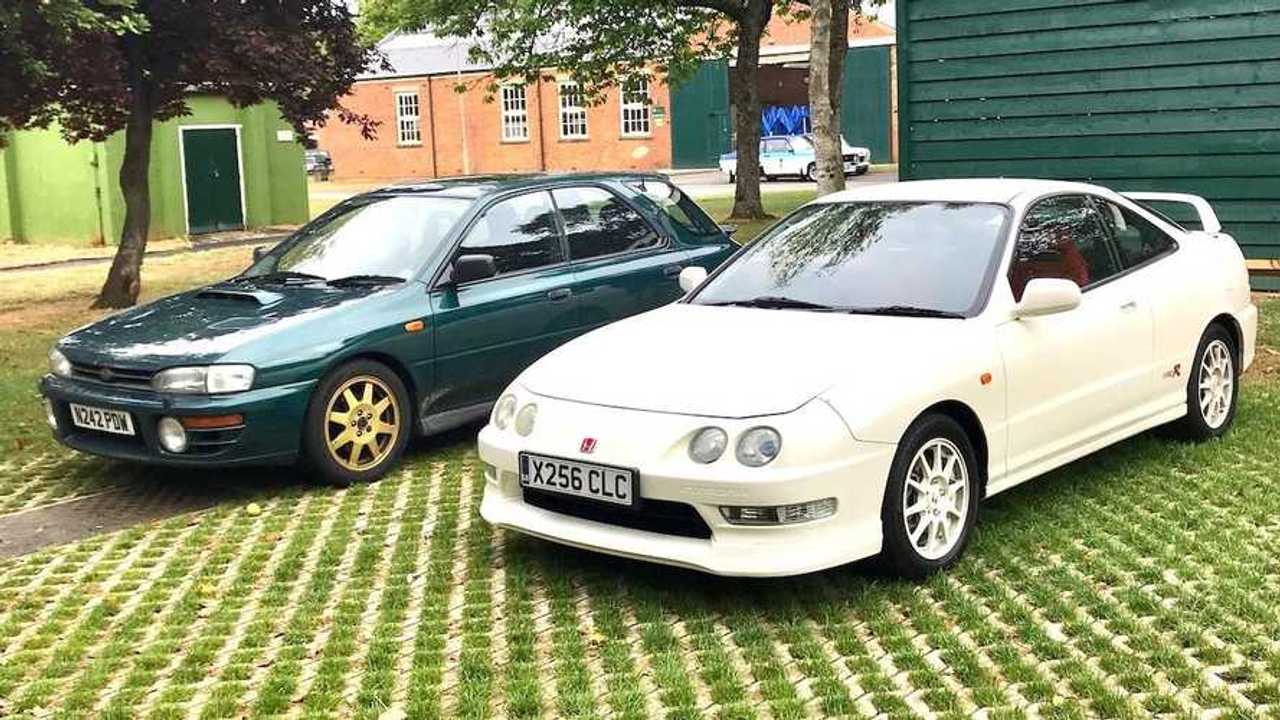 Age-old rivals, similar age and performance but one twice the price of the other – and with some surprising differences between the two

Rivals, strangely similar and yet in other ways completely different. Let’s spoil it from the beginning, and say I love them both (sorry about that).

Both are performance icons of their age. Both are of the same period, and until recently were of similar value. Both are surprisingly tough and brilliantly fast and fun to drive. Both have that hard, shiny black plastic switchgear of all Japanese cars of the time, along with the almost-as-hard matt black/grey plastic throughout the rest of the interior.

Both look remarkably compact compared with modern cars. Oh, and both are great fun – which I worked out 20 years ago on my Playstation, playing Colin McRae Rally (blue Impreza with gold wheels) and Gran Turismo (always choosing the Integra Type R).

So, I’d better admit to being a serial Impreza Turbo owner. The scruffy green wagon here is mine, and though hard-used, it’s a bit special, being a very early car and one of the very first Prodrive road drive conversions in the UK. Same power but Bilstein suspension, Recaro seats, Speedline wheels and even a Prodrive plaque on the dashboard...

The Integra, part of Honda UK’s heritage fleet, is considerably less scruffy and has covered virtually a third of the mileage of the Subaru. But I know Impreza Turbos well enough to know how a good one drives and I’ve also covered more than 50,000 miles in later models more equivalent to the Integra. The battle is on.

Integra Type R first. Despite my best attempts, I’d never driven one before. I unlock it, feeling full of excitement. Drop down into the bright red alcantara seats, and immediately feel at one with this car. The seating position is low, lower even than the Impreza’s, and the car feels really small yet airy.

There’s a bit of a blind spot over my left should with that thick C-pillar, and the view in the rear-view mirror is all spoiler. I love that.

It starts straight up, and the gear lever slots straight into first, feeling wonderfully mechanical. It needs a few revs to pull away cleanly – there’s not much in the way of torque – but immediately every control feels direct and precise. But it doesn’t seem very fast! And within three or four miles I’m onto dual carriageway and trying for more gears that don’t actually exist. 4000rpm at 70mph? Surely I’m in third? No, I’m in fifth. Not sure I like this.

Still, the handling is just brilliant, more communicative than any front-wheel-drive car I’ve ever driven, even when bowling far too fast into corners, when those appealingly small front wheels and skinny tyres start to trip over themselves in comedy understeer that just adds to the fun. OK, I’m liking it a bit more – and while we’re at it, the brakes are absolutely superb.

I’m still not loving the engine and transmission though. The 1.8-litre 16-valve four-cylinder feels harsh, the gearbox is whiny and the final drive just seems far too low. I don’t get it. After nearly two hours I feel worn down by it.

Next morning, I take a different route, turning off at Silverstone to take the back routes to Bicester Heritage. Even by this point I’ve adapted to the revviness of the engine, pushing it harder, taking it to 6000, 7000rpm on every change, and loving the way the engine note goes from mild-mannered to aggressive and racey around 5000rpm as the variable valve timing kicks in.

And on the back roads it just flies. Every input makes a difference, every extra 1000rpm takes it further, faster. The turn-in is so precise, and though it’s not as quick as a modern electrically-assisted system that quickens up response for smaller inputs, there’s much more honest (rather than simulated) feedback as to what’s going on.

The surprise, though, is how good the ride is. Back in the day, the Type R was often said to be near-undriveable for its harsh suspension, just as the was a generation before.

What a laugh! The 205 is still as much fun as ever but you’d never say it gives a harsh ride – and the Integra, while stiffer, is simply well-controlled and never bone-jarring, especially compared with modern cars carrying twice the weight and running low-profiles on 20in rims. How things change.

So the Integra feels special, really special, and gives a more precise, responsive drive than almost anything around. On a long journey that low gearing would drive you mad, though it actually smooths out above 70mph – and a good stereo would help…

Which brings us onto the Impreza. Bigger than the Integra, and heavier, at 1240kg (2734lb) compared with 1149kg (2533lb) – partly due to its trademark permanent four-wheel drive. It’s a flat-four cylinder engine, so the weight is lower, and it’s a 2-litre with a turbo rather than 1.8 with variable valve timing, which gives it 208bhp compared with the Integra’s 187bhp.

For me, it’s like a comfortable pair of shoes, so when I get back in it after two days and 200 miles in the Integra, it’s quite a shock to find myself sitting higher, in a bigger car, with slower steering and less effective brakes (later Imprezas do have better brakes than my pre-facelift car but they’re not in the Integra’s league).

But it pulls away with less fuss, and sits at 70mph with the engine turning at a mere 2750rpm. The downside is that a downchange is often needed to stir the turbo into life – when you get that right, the acceleration feels considerably more dramatic than the Integra’s (though both cars have similar 0-60mph times, 6.5 seconds; top speeds are both 145mph).

It grips for longer too, the wider tyres and four-wheel-drive running rings around the front-wheel-drive Integra even in the dry. In the wet, the Honda wouldn’t stand a chance. My car is on Prodrive-specification Bilstein shocks and Eibach springs, with Powerflex polyurethane bushes all-round, so it’s really good by Impreza standard, but still not as precise as the Integra. And the Impreza’s extra weight really shows up tearing into tight corners, the front rolling more than you might want it to.

Like the Integra, it rides really well, making a mockery of new car suspension, and like the Integra, the harder you push it, the more enjoyable it is, and the more it shines. Drive either of these cars passively and they feel a bit underwhelming. Excuse the cliché, but take them by the scruff of the neck and they’re transformed.

So which did I prefer? Hmmm. I found the Integra more exciting; it feels more finely honed, more ‘special’. But the Impreza is the much better all-rounder, giving more on an everyday basis, always surprising with its immense capability.

If I was buying a car for sheer exhilaration, to be used on special occasions only, then it would have to be the Integra Type R – and from the reaction it receives on the road, I’d say the general public would agree.

But the Impreza wins for more regular use, even if the only drivers who seem to appreciate Imprezas are other Impreza drivers. That will be why (along with the rarity) prices for the Integra have topped £10,000 for a good ‘un, while .

Tell us in the comments below which one you’d prefer.