Lunar Rover: Why Earth's most significant car is on the Moon 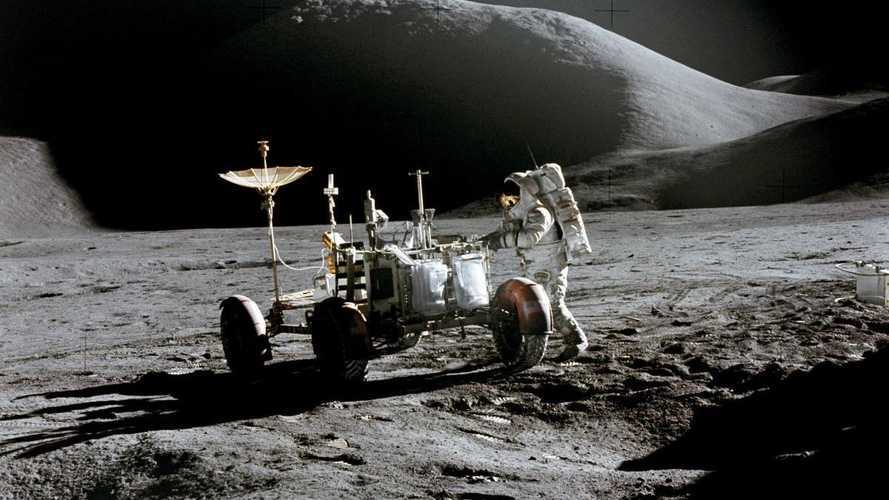 The 'Moon Buggy' might only be capable of 11mph but it's a more important vehicle than any Ferrari or Lamborghini. Lunar Roving Vehicles were a huge human achievement

The 20th century marked the coming of age for the automobile as we went from vehicles that still represented horseless carriages, to road-legal machines capable of over 200mph. The car’s evolution was fast and furious, driven by competition and nations newfound relationships with one another. So what was the most significant car of the 20th century?

It’s not the Ford Model T, a Lamborghini Miura, Ferrari F40, a Land Rover or even the much loved Mini. The car in question had a top speed of 11mph, but it went where no car had gone before it. This is the Lunar Rover Vehicle, or LRV if you speak spaceman.

It might look like some garden furniture strapped to a skateboard, but the ingenuity required to package and operate the LRV on the surface of the Moon is incredible. Even before Neil Armstrong first set foot on our cratered partner of the solar system, NASA and DR Von Braun were thinking about driving on the Moon. With a vehicle, or ‘rover’, as they colloquially became known, astronauts could travel further and maximise their time on surface as opposed to waste time walking everywhere. Various concepts were devised, but until probes and Armstrong himself visited, engineers had no idea what the surface of the Moon actually consisted of. Was it powdered, bouldered, sticky, could it even support the weight of a car?

Initial designs with corkscrews, six wheels and 10 foot tall chassis were all considered. Once some verifiable data on the conditions came back, design choices became somewhat more rational. Our moon is covered in a thin layer of fine powder, supported by hard rock underneath, so wheels would indeed do the job. The notion of mobile bases was explored, but was quickly ruled for weighing too much. Companies such as Northrop Grumman and General Motors continued their research and development into their vehicles.

The task of building an LRV was clearly tough. With costs spiralling and the near disastrous Apollo 13 mission in the headlines, people were questioning whether NASA’s programs were worth the cost. However, that didn’t stop Sam Romano at GM, who was determined that it could be done.

Romano was informed of a small triangular compartment under the landing module that wasn’t used for anything, but to fit a car in there was something of a ‘square peg, round hole’ situation. Romano put his best engineer, Ferenc Pavlics, on the job. A few weeks later Pavlics had built an ingenious model that fit into the space, without the need to be disassembled. A unique spring-loaded mechanism allowed the car to be deployed from the impossibly tight space.

Marching into Dr Von Braun’s office, the pair demonstrated the LRV model that utilised a G.I. Joe figurine in place of an astronaut. Von Braun was fascinated by the remote control toy that was trundling around his feet. Elated that his vision of driving on the Moon would actually become a reality, Braun exclaimed ‘we must do this!’

After some more development with Nasa and Boeing (who would build the rover), the LRV was born. Powered by a pair of batteries giving it a range of 57 miles, it might appear simple, but this ‘Moon Buggy’ was complex in design. Engineers created a lightweight wax-based system that regulated battery temperature, rugged suspension, and rear wheel steering for the best manoeuvrability. Even the tyres were extremely specialised, being made from wire to prevent degradation in extreme heat or cold and to capture dirt between the gaps, to increase friction with the Moon’s surface. Extensive work was done to simulate how the car would behave in reduced gravity and how the astronauts should deal with driving it. Eventually, the first LRV was ready for Apollo 15.

Deployed and touching the surface for the first time, a car had arrived on the Moon. However, it became apparent that the front steering mechanism had broken during the violent ascent from Earth on the Saturn V rocket. Mercifully, the rear-wheel steering was still functional and served as an effective redundancy. David Scott and Jim Irwin became the first people to drive a vehicle beyond Earth. The LRV proved invaluable to the astronauts as they traversed the Moon far faster than before. Capable of carrying samples and feeding back live video to Earth, two more rovers became a staple of Apollo 16 and 17.

After the cancellation of the Apollo program, man never returned to the Moon, leaving three low-mileage LRVs 238,900 miles from home. It has been speculated that if Apollo 15’s vehicle could ever be recovered, it might become the most valuable car back here on Earth. It might even be worth enough for NASA to break even on the $38 million spent on its development!

The Lunar Roving Vehicle is not only one of automotive’s greatest achievements, but also represents a landmark in human history.