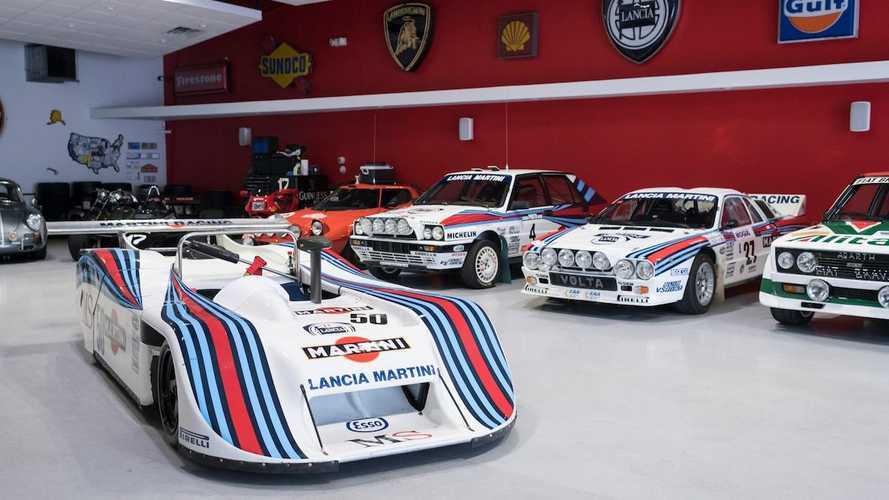 From Fulvia to Le Mans LC2, the best of the works cars are here – and they live in a surprising location (hint: it's a long way from Italy)

You might not expect to find a collection of ex-works Italian competition cars owned by a born and bred Irishman in deepest Florida, USA – but no-one’s complaining because the cars in question have become regulars at events around the USA, to the delight of visitors.

The cars in question are Lancias, and their owner is John Campion, an entrepreneur and philanthropist whose passion for rallying was forged during his early teens watching the Killarney stages of the Circuit of Ireland rally.

Most of all, he remembers seeing the Lancia Stratos of privateer Billy Coleman coming hurtling through the forest – and the memory stayed with him throughout the following years.

Soon after, at 16 years old, John Campion left school and formed a company making portable generators for live events. The business was a huge success, and John toured the world as technical support for all manner of acts, including Motley Crüe, Michael Jackson and AC/DC.

Eventually, after some wild times, he settled in Florida and began buying cars – John says his entire business model was based around raising enough money to buy more cars. Fortunately, the business kept growing...

At first, John says he went for ‘wow factor’ cars that didn’t really mean anything to him. They included a Ferrari 250 GT Lusso, 275 GTB, Daytona and an F40.

But then came a turning point. He bought a Lancia Stratos (below). He wanted an Alitalia livery Stratos or an ex-Markku Alén Stratos, but eventually had to settle for a privateer car. Not that he minded too much – having not even seen a Stratos since 1978 he was ecstatic with his purchase, and would regularly sit in, prime the pumps and start it up, even when he wasn’t able to take it out for a drive.

This started a whole new buying process for John. Next up came a Lancia Delta Integrale (below), and not just any old Delta Integrale but the 1988 Group A World Championship-winning car, as driven by Miki Biasion with co-driver Tiziano Siviero. It’s one of four used that year, and the one that won the 1988 Portugal and Olympus/USA rallies, scoring as many points in the year as any of the other three – so it’s fair to refer to it as ‘World Championship-winning’.

From the works team the Integrale went to Australian Rally Services, and used for a couple more years, even winning the Rally Tasmania, before going into storage. It didn’t emerge until John got wind of the car, to find it still buried under spares and old newspapers. He had it fully restored to 1988 specification, as you see it here.

Next he bought a Group B 037 (above), one of the last built, and driven to second place by Markku Alén in the 1984 Rally New Zealand. With flimsy kevlar bodywork and a supercharged engine, it’s as violent and exciting as you’d expect a Group B car to be.

The next car that John bought was the gorgeous little Lancia Fulvia, a genuine Fanalone model, and then to complete the rally set he just had to have a four-wheel-drive Group B S4. The S4 makes the 037 look tame: it has a supercharger and a turbo, and it revs to 8500rpm.

We mentioned ‘completing the set’. Well the Lancia rally set might have been complete, but John then found a 1981 Group 5 race Beta Montecarlo (below). This very car was raced at the 24 Hours of Daytona, Mugello Six Hours, Monza 1000km, Nürburgring 1000km and Le Mans 24 Hours – which it finished fourth overall.

And what's left in the works Lancia set? Well of course you'd need an LC1 and an LC2 wouldn't you. The LC2 (below), Lancia's 1983-86 Group C sports prototype for the World Sportscar Championship, came first to John. It uses a twin-turbo Ferrari V8, similar to the 288GTO's engine.

The LC2 was followed into the collection a year or so later by its predecessor, the LC1 (below). This four-cylinder, open-cockpit Group 6 sports car was designed for the World Endurance Championship and Le Mans, and John's car is the second of the four built, and the winner of the 1982 Nürburgring 1000km.

There are other cars too of course, the most closely related of which is the Fiat 131 Abarth works rally car, powered by the same basic engine that most of the Lancias use. Then there's a Ford Escort Mk1 rally car, a 1981 March 811 F1 car, an Outlaw-style Porsche 356, a modified 911, a Lotus Cortina Mk1, Jaguar E-type, Ford GT and more. Oh, and did we mention the replica Lancia team works rally support van?