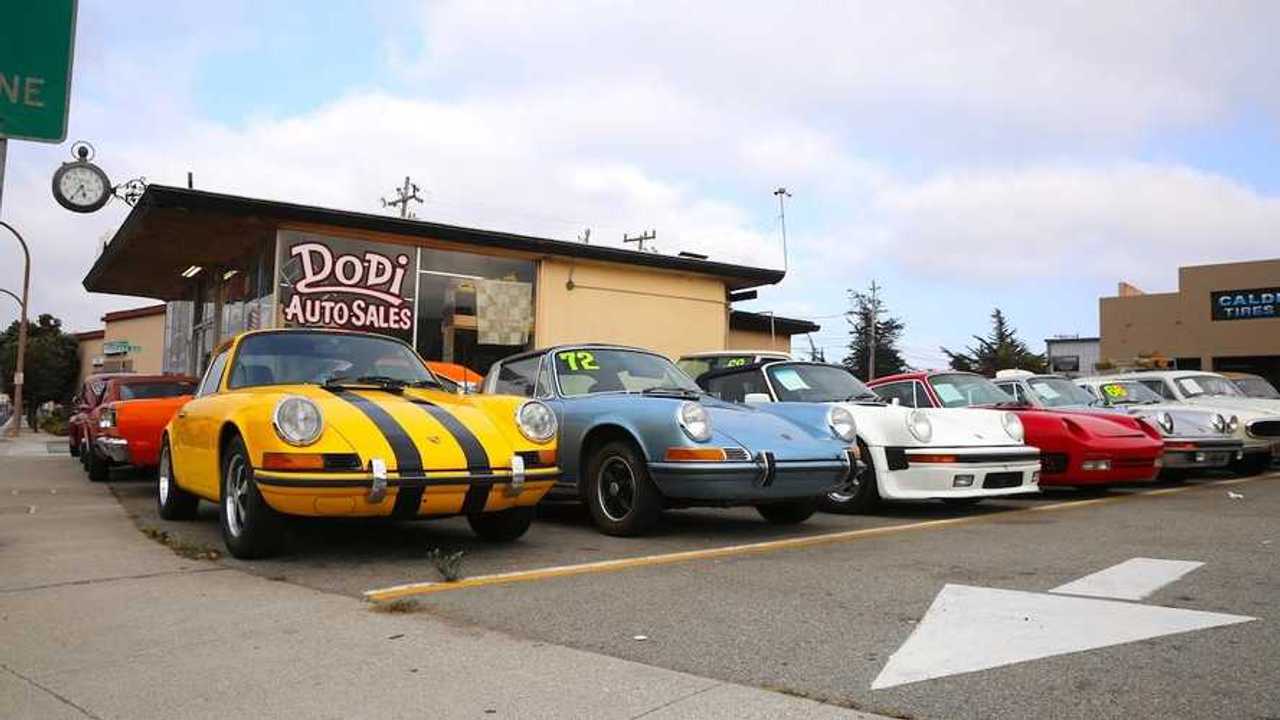 Dodi Khalil, made famous by TV's Chasing Classic Cars, sells classics that no-one else would touch on the glamorous Monterey Peninsula, California

On the outskirts of Monterey, within 15 minutes of the Pebble Beach Concours, the Monterey Historic Reunion, the Quail, and all those other stunning events of the annual Monterey Car Week, is a classic car dealership on the side of a former service station.

It’s not the usual classic car dealership. There’s no glossy showroom or slick salesmen. Actually, there aren’t even any shiny cars. Instead, to non-believers, this may look like an exotic scrapyard.

But to the true collector car faithful, Dodi’s Auto Sales is a little bit of heaven. It’s a place where every car is full of potential, where the ‘restore to former glory’ cliché comes to life. And, refreshingly, Dodi’s reputation is one of straightforward, honest dealings.

If you’re a fan of TV’s Chasing Classic Cars, you’ll probably already have recognised Dodi’s from certain episodes, particularly the one in which show host Wayne Carini takes a terrible example of a Volvo P1800ES to the nearby Concours d’LeMons.

‘People call me from all over the world because of the TV,’ smiles the perpetually happy Dodi. ‘They still call me because of the Volvo episode, they don’t realise it was so long ago now.’

Dodi, who came to the USA as a Palestinian refugee, has been trading in cars since he was 17, and he’s been on this prime site for over 20 years. Now he’s ably assisted by daughter Aminah (below), who he says keeps him in line.

He’s a Porsche enthusiast through and through; if you visit you’re likely to find a few Zuffenhausen orphans, tired and neglected 914s, 911SCs and cabriolets – and maybe that late-70s 959-style bodykitted Carrera 3.0 will still be there.

Dodi has always dealt in other marques too, though generally British and European. After Porsche, VWs are his next love, and there are usually a few Beetles, Type 3s, Karmann Ghias and Type 2 Transporters on his lot. There are also all manner of other classics, all in need of much love and attention – Ponton Mercedes are Dodi's latest thing.

Not that he’s given up on Porsches of course. ‘Now let me tell you my most beautiful story,’ he says. ‘This is the story of the year. I love Porsches but Porsches have gone, there’s not much left. Some of these cars I have are on consignment; they used to be all mine.

‘But God gave me more Porsches in the last few weeks. Huge bees came in, they flew in like a massive army. The queen bee moved, and the other bees had to follow the queen. They came in here [he gestures around his office] one after another, so I had to bring in someone to move the bees.

‘One of the men in charge of the bees, he’s a big fan of the 911. All his life is honey, he wants to save all the bees in the world, but he loves Porsches too.

‘He says he’s left his 911 in a bodyshop for a year and a half, he has a big conflict with them. So I went to the bodyshop and I acted like an FBI agent! I say, “Where’s the 911! The guy at the bodyshop, he says the engine’s not working, and the customer claims we dented the car.

‘I said, “Stop! How much do you need to get the car out of the shop?” He wanted $15,000, which was a lot but it was an expensive bodyshop. So I say look I’ll pay the bodyshop, and the car will be mine.

‘The bees bought it to me! The engine started fine, it was the ground connection from the battery.’

Generally, though, these cars are rather harder to find. Are there even any bargains left, we ask Dodi.

‘I always tell people there are bargains everywhere,’ he says. ‘Go to the alley, don’t keep your eye on the GPS and stay on the freeway, look down the alleys and that’s where you’ll find the bargains.

'You’ll be surprised what you find. People bury things, they leave them because they’ve got a bad feeling. I got some cars a month ago, you would not believe, in a man’s basement, next to my neighbourhood where I’ve been going for the last 30 years.

‘He put the cars under the wall in the basement. He did this because he got upset with the dealership, he said “I’m going to punish this car!” The human mind is strange! One car was an old Saab, 1960s, and the other one was a very rare car, I can’t remember the name – sometimes I just buy them because they have the look about them. I even have a Siata!’

The Siata (above) is a bright orange 1971 Spring model, which Wayne Carini borrowed for the 2018 Concours d’LeMons. It’s perhaps not how you’d picture a Siata.

‘They’re not easy to find, cars like this. I always believe in old radio shows. I invested in an ad on a show in Fresno, California – you have to be very old to listen to the show. I get lots of calls from that ad. I see lots of people who are close to the end. They want to fix things before they go, sell their cars – I always see people before they die. They’re amazing people.

I ask Dodi what was his best ever buy. Of course another story follows…

‘The best was a collection I bought from a gentleman from Sweden who owned a Volvo dealership. When I was 17 he had an ad for a Porsche 356 for $10,000 – I used to watch the newspaper advertisements, I’d get up at 2 or 3 in the morning to get the newspaper to be the first to read the ads. He was 50 or 60 at that time, he had just retired.

‘Then 20 years after I received a call from him. I’d become Dodi’s, and people knew my name. He said to come over to his office. I didn’t want to but my friend said to go.

‘He remembered what he’d done, and he held my hand and said, “Dodi I’m sorry. I wasn’t mad at you but I was mad at my assistant because he booked that ad, and I’d told him not to.” And we became friends – I’d thought he was the worst man in the world but he was an amazing man.

‘So he said, “Dodi, I have a deal for you, just for you”, and he made me buy a car. He called me every month, “Dodi bring me money and take away one car.” So every month I went and took a car from him, for ten or 15 years.

‘And every time he made me buy a car he said, “Just for you”, and that’s why my signs say ‘just for you’. He’s passed away now but the last car I bought from him was a Salmson. That was not an easy car to sell because no-one knows Salmson, but I managed to sell it in the end.'

‘The worst car I had was the Maserati, the brown one,’ he laughs, knowing I’d seen it, a 1980s Quattroporte on the lot the previous year. ‘People would laugh at me saying “You still have the Maserati!” I got it from Mexico. They thought it was a Chevy! Eventually I sold it.

‘Why do people like classic cars? He gives me ten seconds to answer, as I suggest it’s nostalgia. It’s history. That’s what people love. I saw my dad, I saw my family. The steering wheel gave me memories. Why do we sell a Porsche for $100,000? It because of history.’

And with that Dodi heads over to greet more customers like old friends, though it’s likely he’s never seen them before, a huge smile on his face, ready to reel out more stories. If you’re ever in Monterey, be sure to visit Dodi’s Auto Sales.