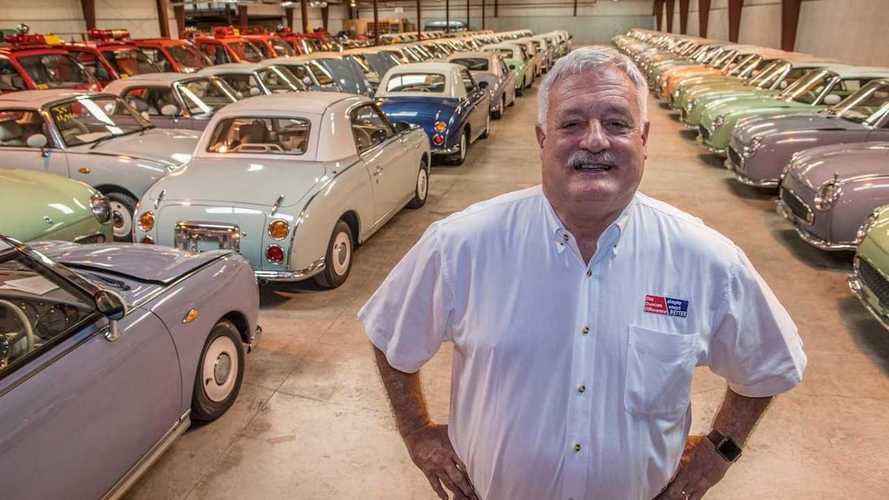 New car dealer Gary Duncan always wanted a Nissan Figaro. Now he has over 100 of them – along with hundreds more obscure JDM classics

'I saw the Figaro in 1989 at the Tokyo Motor Show, and I said I’m going to have one of those,’ says Gary Duncan. ‘Now I’ve overdosed!’

He’s not joking. As he says this, there are 115 Nissan Figaros lined up behind him, along with 25 Suzuki Carry mini-trucks, 15 Honda Beats – and around 700 vehicles in total.

Gary is the founder of Duncan Imports in Christiansburg, Virginia, USA with a love and a speciality for JDM (Japanese Domestic Market) cars and mini-trucks. ‘This is what happens when you’re 65 and cars are your hobby,’ he laughs. ‘A mistress would have been cheaper!’

What’s really exciting is the prices of his cars. They start at around $5000, for a mini-truck or a Honda Beat for example, though Gary recommends spending more if it’s a Figaro you’re after. ‘I've had them for $1500-1600 but you have to pay in the mid-teens to get a decent example.

‘I always say, if you don’t like it bring it back. If you can afford one then you won’t lose on it.’

Gary is a second-generation car dealer, in the trade from the age of 18, and his family has been in the business since 1955. His chain of dealerships represent Acura, Audi, Ford, Lincoln, Honda, Mazda, Suzuki and more, but Gary has always loved classic cars – though initially they were Triumphs and MGs, not Japanese kei cars.

Everything changed when he won a Honda dealer prize to visit the Tokyo Motor Show in 1989, where he first saw the Figaro (above). He asked the Nissan dealer when he could buy one, only to be told that he couldn’t, because there were no plans to sell Figaros in the USA.

Gary never forgot the Figaro though. Production of the model started in 1991, and US law allows the import of cars not originally certified for use in the USA when they reach 25 years old. So 2016 was marked as the year that Gary would finally get himself a Figaro.

Meanwhile, in December 2016, Gary’s love of Japanese classic cars saw him visiting an enthusiast two hours from home who was selling 1990s Hondas. They couldn’t agree on prices for the cars but, as Gary was leaving, the seller mentioned another garage of cars – and there was a Nissan S-Cargo delivery van (below) and a tiny red Japanese firetruck (above). Gary had to have them!

It turned out that the seller had a contact in Washington who was importing these cars from Japan. 'He called me up two weeks later, says he knows this guy… and I ended up buying ten more firetrucks. Turned out he was an importer, and between January and May 2016 I bought from him, but the importers were charging me too much commission.

‘So I found a Japanese lady in Los Angeles. We made a deal, and I was treated like a king – it’s like I’ve got a Japanese family now! They’ve got people at auctions in Japan every night. I pick the ones I want, they translate, check them over, and we import them to the USA.’

Whichever one it is, Gary is still passionate enough these cars to keep some of the gems back for himself. If you go onto the Duncan Imports website, click on inventory, and then sort the cars by price, low to high, you’ll see that the first few pages are marked as ‘private collection, not for sale’.

These are Gary’s own cars, and they include what may be the best two Figaros in the world, each with less than 2000 miles on the clock, plus Subaru Sambar and Mazda Porter mini-trucks (above) – scaled-down homages to the iconic splitscreen VY transporter – as well as a couple of Autozam AZ-1s (below), a remarkable yellow Suzuki Carry 4wd truck and a very appealing 1984 Honda City Turbo.

Oh, and some hearses, of course. One is a relatively restrained Nissan President but also take a look at the highly-ornate Toyota Century hearse below (behind the equally over-the-top Mercedes hearse]. Words cannot do them justice.

Gary’s own cars provide some indication of which JDMs he thinks will be collectible, though many are there just for the sheer love of them. So which would he recommend as appreciating assets?

‘I think you’ll see the Toyota Soarer, Autozam AZ-1, Honda Beat (below), Suzuki Cappuccino and Nissan Figaro becoming more and more collectible. Many of these cars are very low mileage – they do more miles on the sea, coming here!’

However, he’s also finding that the Mitsubishi Delica (below) and Toyota Century are popular with his customers, who don’t seem to be put off by the majority of his cars being right-hand drive.And he says that mail carriers are actively seeking out right-hand drive vehicles for the convenience.

‘If you’d told me before all this that I was going to buy 700 right-hand drive cars, I’d have told you you’re out of your mind,’ laughs Gary. He does have rules though, and the first is that he will not buy cars that need restoration. ‘I’m more about seeing them as pure as I can get them. I want customers to see them with all the flaws. If it’s got corrosion I won't buy it.’

Still, even Gary seems surprised at the size and success of the business. ‘I feel like God is in control because I’m just not that good!’