Everything you missed at FerrariChat Miami 2018 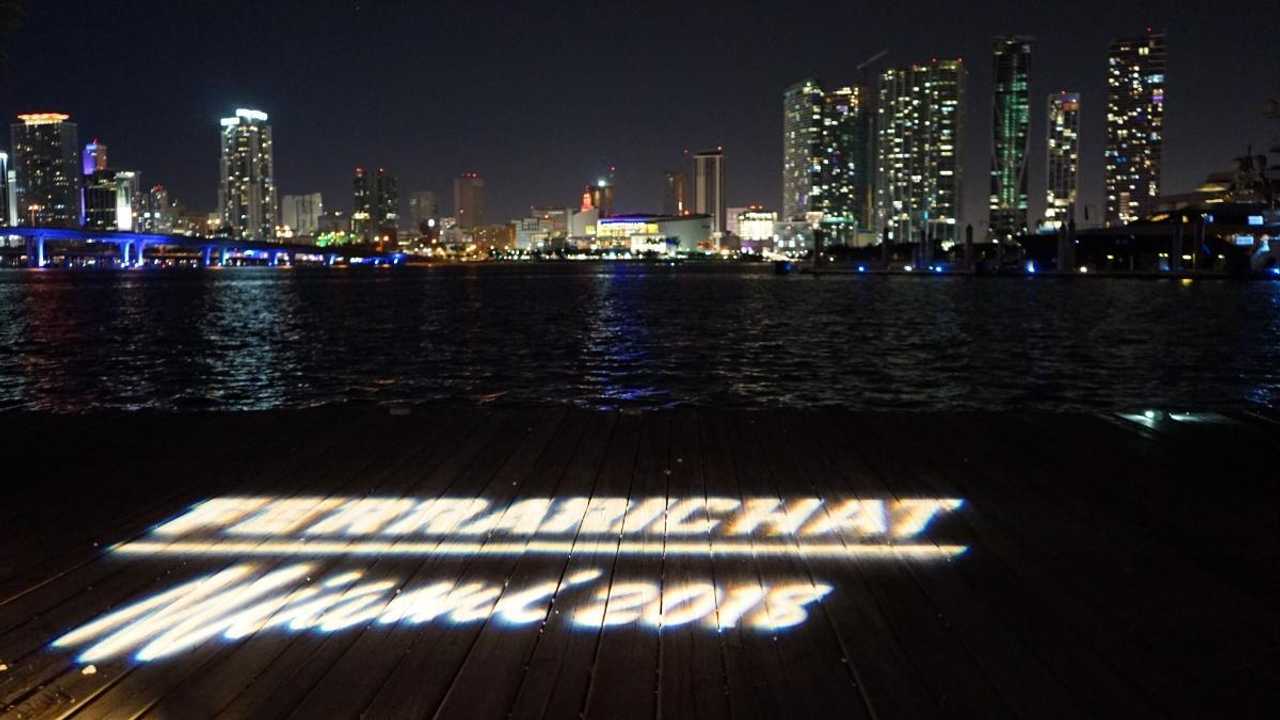 This past week FerrariChat hosted its premiere event, FerrariChat Miami 2018, and it was an instant success with their guests!

The weather was perfect and we did not experience a single drop of rain. We had Ferraris like the 812 Superfast, F430, and many spiders like the 458, 488, 328 GTS, California and California T. With sun above us and ocean around us, it was the perfect environment to drop the top and cruise around the same town as Miami Vice. Here is everything that happened at FerrariChat Miami 2018!

After months of planning, day 1 finally arrived. All the cars arrived safely thanks to Total Care Transportation and they were parked in their own private lot. Those that had a room facing west could see their car from their balcony. Guests began arriving at the Ritz-Carlton Key Biscayne in the early evening, and after getting settled in their rooms, they joined us on the Grand Lawn for a reception and drinks right next to the ocean!

As the guests approached the reception, they were given customized event credentials and swag items. Swag included FerrariChat Miami Eddie Bauer jackets, Giorgio Piola shirts and posters, and personalized bottles of Crown Royal with each couple’s name embroidered on the purple Crown bag as well as printed on an authentic label!

Dinner was a delicious assortment of fresh seafood, vegetables, and more. After washing it all down with drinks from the open bar, everyone mingled under the moonlit palm trees and eventually transitioned from the Grand Lawn to the hotel restaurant bar. Before calling it a night, everyone was offered a creme of the crop Trinitas cigar from Provedencia. FerrariChat Miami 2018 had officially begun!

What an amazing trip! The experiences were all first class and Ferrari Chat was the perfect host. This could not have been a better trip and we can't wait for the next event!

The first full day of Ferrari action started bright and early, and all of the eager attendees met downstairs by their cars ready to head toward Miami-Homestead Speedway. We had the whole race track to ourselves for the day, and after everyone parked in the pits, they headed upstairs for breakfast in the pit room that overlooks the startling line. Breakfast featured classics like french toast, eggs, bacon, bagels and more. And while everyone enjoyed their meal, professional driver, Guy Cosmo, spoke to them and gave them insights from the world of racing, especially racing Ferraris!

With everyone fed and fully awake, they shuffled into their first class with the driving instructors and gained an overview of the road course within the main track. Though Miami-Homestead Speedway is known for hosting the final NASCAR race of each series, they actually have a very impressive road course that proved to be an absolute blast for each driver.

After learning the track in a classroom, everyone did a lead-follow lap with the instructors. And before each driver was free to fly around the speedway, we set up a short ⅛ mile drag strip and raced each other. Though it wasn’t the most official drag strip, the drivers loved it. A certain electric car with a performance package joined the fun and lined up against the 812 Superfast. While the giant battery pack was much quicker off the line, the 812 closed in effortlessly and won the battle for team internal combustion engine.

After some fast laps, another delicious meal, and more fast laps, it was almost time to head back to the Ritz, but not before a 458 GT3 showed up and put on a show for all of us. Such a wild machine, it was truly a treat to watch (and hear) it race around the speedway. All in all, the private track day was a huge success and FerrariChat Miami was off to a fantastic start!

Having just returned from a wonderful 5 days at the inaugural FerrariChat event in Miami, FL, I can honestly say that it exceeded my expectations exponentially. While there we saw incredible sights, had 5-Star service the entire time, and enjoyed food that was varied and delicious. The highlight for me was the day we spent at the Homestead Raceway which gave me a chance to exercise my wonderful Ferrari.

After returning back to home base on Key Biscayne, everyone relaxed and prepared for dinner at the historic Curtiss Mansion in Miami Springs. The Curtiss name is that of Glenn Curtiss, the famous American inventor and businessman associated with the Wright brothers. As an iconic pioneer of aviation and other motorized transportation, Curtiss supposedly had his hand in 500 patents and 40 inventions, and met with historic figures such as Henry Ford and Alexander Graham Bell at the very home that we all had dinner and drinks!

As everyone departed from the bus, they were met with a refreshing mojito. Then they entered the mansion and enjoyed live piano, appetizers, and a tour of the property. There were a couple of open bars, including one at the back of property near an intimate grove of trees surrounded by old stone walls that were engulfed in vines, branches, and leaves.

Dinner was a build your own risotto bar with options like chicken, shrimp, vegetables, cheeses, and more. Caterers prepared your custom dish right in front of you, and then they served dessert hors d’oeuvres. Catering was provided by Joy Wallace and they worked with us throughout the entire event, presenting flavors from all over the culinary spectrum. With all of our guests in good spirits, we loaded up the bus and then headed back to the hotel bar and closed it down!

On Friday, we had our poker run, a competition that started out at the Ritz-Carlton, and ended in the Florida Keys! Each contestant was given a card at a designated stop, and the Ferrari with the best hand at the end of the route wins. The first card was handed out at the Ritz, with the following card handed out at The Collection, a famous exotic car dealership in Miami. The group ate brunch surrounded by the newest Ferraris, and they were also given a tour the dealership and the workshop.

The other stops were posted along the way in The Keys, with the final being at the Amara Cay Resort in Islamorada. The rally was the most scenic part of the event, and the drivers had many opportunities to exercise their prancing horse clear of traffic. The participants were treated to lunch on the beach with gourmet cuisine and a gorgeous view. This year, Dom and Carrie Stroud won the competition and in turn received a Giorgio Piola G5 Sport Chrono Watch worth $2985!

After the poker run, it was time to relax and unwind as dinner at the Island Gardens Marina was approaching.

The Island Gardens Marina had an astounding view to say the least. It was located right on the water of Watson Island and had a complete view of the sun setting behind the Miami Skyline. Guests were treated to more delectable catering and drinks while they drank and danced the night away.

As for the 4th day, it was all about luxury. Our guests had their cars on display around the opulent shops and restaurants of the Miami Design District. We worked with the city to shut down 41st street, and 12 of Miami PD's finest stood guard around the cars. Some of the shops near the cars included Prada, Louis Vuitton, Gucci, etc. It was a well spent day, so to speak, with the participants doing some damage to the shop’s inventories. Not only were our participants' Ferraris present, but many others from around Miami joined the group. There were TDFs, 488s, 458s, 430s, Californias, a 599 GTO, a Speciale Aperta, a McLaren F1 car, and even a couple Lamborghinis snuck their way in. Adding a special touch, our participants were given personalized show plaques that described their car and its specifications.

The grandeur continued into the night as our group headed to the historic Moore Building. Also located in the Design District, The Moore Building was built in 1921 and holds great significance to the area. All the stops were pulled out that night as we had our Gala, the most extravagant of our events that weekend. Michael Schumacher’s famous F1 car was on display and caught the eyes of many as they ate, drank and danced to the DJ booth. Gala goers were mingling, laughing and having a great time with others that shared their affinity for motorsports.

It started with an exclusive cocktail reception, hosted on the only rooftop in the entire Design District available for private events. Dinner, dancing, and more drinks were downstairs in the main foyer. The main course included delectable short rib and cauliflower with a delicious yams puree, and dessert was crème brûlée. It was a spectacular evening to round out our inaugural event.

After a wild couple of days, FerrariChat Miami had reached the final event on the schedule- a farewell brunch on the Grand Lawn. Just as it began, everyone gathered near the ocean and enjoyed an incredible feast, only this time there was a mimosa bar! Sunday morning was considerably more quiet, as almost everyone was exhausted from the non-stop fun over the last couple of days. After brunch, the cars were loaded up and most people relaxed under the sun before heading home.

FerrariChat Miami was an exciting blur from start to finish. It’s crazy how many things were fit into less than 5 days. It could not have been done without the support of the Motorsport Network and our dedicated event coordinator Shawn Richard. We are so thankful to have had such a special group of people join us on our first journey in the event space, we have learned a lot throughout this whole process, and we look forward to potentially expanding this event to more locations in the future. The biggest question now is, where should we go next?