How you can get to drive classic Jaguars – even a D-type! 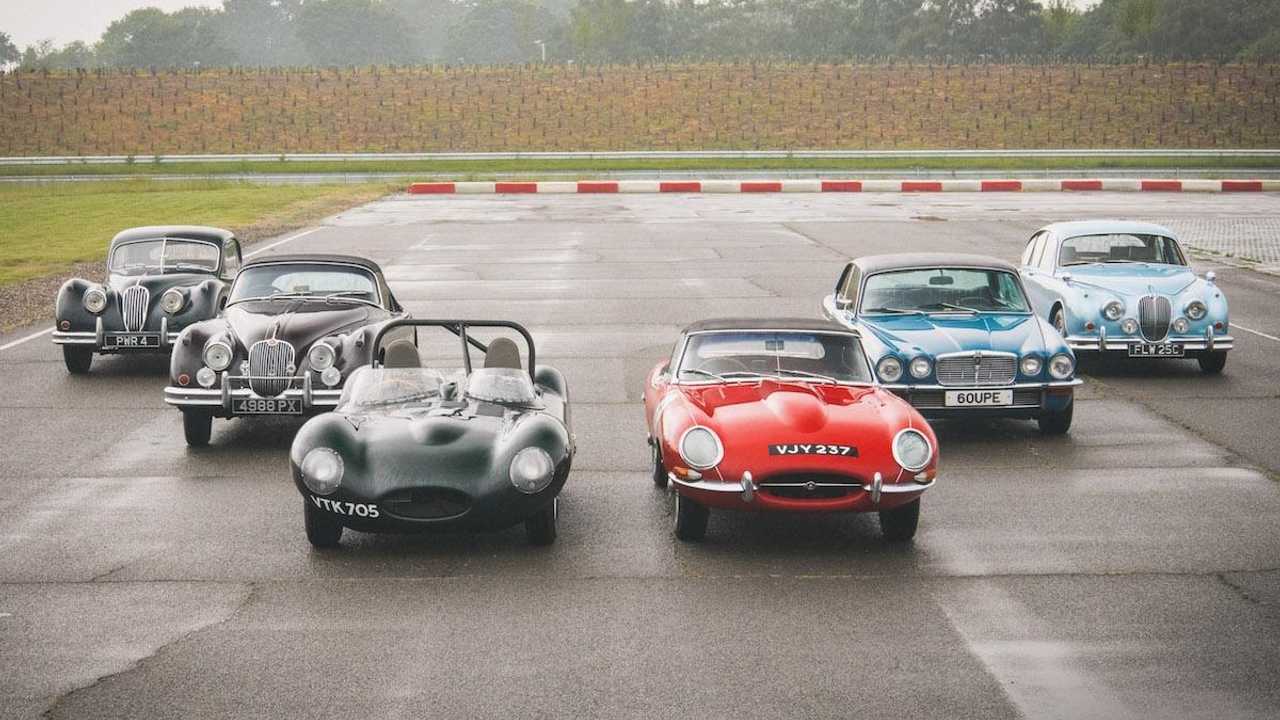 Jaguar Classic has introduced Classic Driving Experience Days, which mean you can drive XK120, XK150, Mk2, E-type, XJC and even a D-type replica

The chance to drive any classic Jaguar is a rare and special thing. If you don’t own one, you could perhaps hire one or borrow a friend’s – or how about driving several different models in one day, with refreshments thrown in?

All of these can be driven on Jaguar’s private test track near Coventry – and if you really want to go for it, you can add a tour of the nearby Jaguar Land Rover Classic Works HQ as well, and even the chance to drive the cars on the road as well as on-track.

It’s quite an offering, and so when the chance came up to sample the Drive Experience, it would have been rude to say no… Keep on scrolling to see how it went, and which cars we liked best.

First up, the Mk2, and it’s a 3.8-litre with a manual gearbox and overdrive, so the most desirable of all the Mk2s. Oh, and it’s a Coombs car, modified in period by racer John Coombs with bonnet louvres, removed rear wheel spats and a bit of extra power. It’s also just out of restoration, and absolutely beautiful. I’m driving this one from the Jaguar Land Rover Works HQ to the company’s private test track at Fen End, around 12 miles away.

With its newly restored interior, the Mk2’s seats feel plump, even over-stuffed, so I’m sitting high, head just brushing the headlining. A few more bums on seats and the seats will settle to a more sensible height. Mk2s have a starter button on the dash – always adds to the period appeal! – and the six-cylinder XK engine starts up straight away.

The gearshift is short and direct and thankfully the steering on this example is power-assisted, because unassisted Mk2s are really hard work. The clutch is a bit heavy but pulling away is easy enough, and we’re straight out onto the road to Fen End.

There’s a great exhaust note to this car, with just enough rortiness without impinging on the civility of what was quite a luxurious sports saloon in its day. There’s a faint vintage whine to the transmission, particularly in first, but what really dates the Mk2 is the low-geared steering, even with the power assistance, necessitating a good bit of arm-twirling round the tighter corners. The ride is firm, jiggly at times, but it never feels uncomfortable.

What’s great though is the blend of classic feel – all those toggle switches, the wooden dash, the leather, every old car cliché in the book – and the pure usability of this Mk2. You could drive a long way in this car. Crucially, given the Drive Experience, you can get into it and adapt quickly, without feeling daunted by 60-year-old design.

When the Mk2’s production came to an end, Jaguar replaced it with the XJ range; first the six-cylinder XJ6, using the same XK engine as the Mk2 uses, and then the V12 XJ12. Almost all the XJs sold were four-door saloons but there was also the coupé variant, now the most sought after.

This car is a V12 coupé, so the best of the lot. It’s rare too, because only 1855 V12 XJCs were built. All were Series 2s, which gives them a handful of extra luxuries over the Mk2 – but going from the 1960s Mk2 into any XJ is not just like moving forward an era – it’s more like stepping into another world!

The contrast is amazing. Where the Mk2 has small windows and a cosy, gentleman’s club feel to it, the XK is light and airy. It heralded a new age in car design, a feeling that's accentuated by the driving experience. The V12 is just silky-smooth and quiet, and the automatic box, though a bit slow to react by today’s standards, just adds to the feeling of serenity.

Honestly, if you’re feeling stressed, then this is the car to drive. It’s so much better than anyone would expect, with a ride that has never been beaten, thanks to that amazing independent rear suspension set-up and the high-profile tyres. Really, a track is the least appropriate place to drive an XJ, but it handled itself brilliantly, rolling a little and with the only worry the lack of feel through that featherlight power steering. But the effortless power of the V12 more than made up for it.

The XJC is a revelation, and we’d be very surprised if you didn’t come away wanting one. Oh, and if you hadn’t noticed, check out the neat registration plate – 60 OUP, or ‘Coupe’.

And now the sports cars. First up, the earliest car here: the XK140. The first Jaguar to use the six-cylinder XK engine, which lasted until the 1990s, was the XK120 – and its successor, the XK140, continued the clear line of sports cars that goes right up to the present day F-type, via icons and Le Mans wins.

It’s also the most difficult to drive. For starters, it’s one heck of a squeeze, though it’s actually more roomy than the near-identical-looking XK120. Leg room for anyone over 5ft 8in is tight in the XK140 (and non-existent in the XK120), and that big steering wheel ends up right in your lap. The controls are heavy, though actually it’s a relief that the steering wheel is so close, because at least it allows you to pull and push on it as you heave the car through slow, tight corners. The Moss gearbox requires a careful change, pausing briefly in neutral to avoid a crunch.

But once you’re really moving it becomes worth it. There are cars here that you could just drive and drive but when it comes to sheer character and experience, the XK140 is the one that stands out. The view through the split windscreen, the smell of the leather, the sound of the exhaust and most of all the way the car accelerates out of a corner, is just brilliant.

It doesn’t take much to get the XK140 sliding a little if you deliberately provoke it, but it’s not a scary sensation, it just happens and you’ll find yourself correcting it naturally. Even the brakes, drums all round, not discs, work surprisingly well, though they’ll soon fade on the track. A wonderful car.

Keep scrolling! The best is yet to come…

Jaguar moved from XK120 to the very similar XK140, before updating to the rather more civilised XK150 – and jumping from the 140 to the 150 at the track really showed up the difference.

It’s also a convertible rather than a coupé, but the hood is double-lined, so it’s not draughty. There’s far more room inside than in the XK120, and although the car is heavier, it does feel faster than the 120 too – and it stops better too, thanks to those then-new-fangled disc brakes all round. But it’s not as nimble, not as responsive, not as sporty.

Still, if you were going for a longer journey, it’s the XK150 you’d choose over the XK120 every time. With 265bhp from the 3.8S version of that now-familiar XK engine, this XK150 would in theory have been capable of 138mph, which is quite something – and even today it feels like a fast car.

There’s a thing with E-types; they’re always even better than you remembered or imagined. Always. This car is no exception – and the wow factor takes another leap when it’s revealed that it was the 70th production E-type built, and originally belonged to motorcycle racing legend Mike Hailwood.

The early production number means that it’s one of the much talked about ‘flat-floor’ models, though actually that simply means that there’s less room in the footwell for your feet. Still, there’s a mystique to the early 3.8 Series 1 cars, because they have the prettiest styling, with the wonderful aluminium-finish dashboard and the covered headlights.

No surprises, it’s great to drive too. The E-type takes the best of the XK models – the sportiness, the rorty but smooth XK engine, the evocative styling inside and out – and combines it with Jaguar’s independent rear suspension set-up and all-wheel disc brakes. The result is a car that’s a pleasure to drive, even in convertible form on a cold, rainy day…

On the track, the E-type felt fast and nimble, never putting a wheel out of place. The seating position is slightly higher than you might expect, and the windscreen is lower, so it’s blustery in there, but not unbearably so. As an early car, it has the 3.8 rather than later 4.2-litre engine, but that still means a claimed 265bhp and 150mph capability. Even allowing for a bit of 1960s poetic licence, this is still a fast but civilised car.

Yes, of course we’d rather be driving the real thing. But the real thing is now worth millions, so don’t be upset that the Classic Drive Experience D-type is a rather good replica – in a way it’s a relief not to be driving something irreplaceable and near-priceless.

Also, if you’ll excuse the automotive name-drop, I’ve driven short-nose and long-nose genuine D-types, and this replica drives just the same. So you really can get to sample how it feels to drive a multiple Le Mans winner.

So, what’s it like to drive a D-type, real or replica? Well, it’s amazing. Phenomenal. It’s not an easy car to drive but it’s nowhere near as difficult as you might expect a car that’s won Le Mans and countless other legendary races to be.

There are two challenges, and the first is climbing in, because you have to climb over the wide sill, step on the seat (which feels very wrong) and then drop yourself down into the cockpit, which feels as close to a World War 2 fighter plane cockpit as you’re likely to find in the car world.

Challenge number two is the clutch, which is heavy and short on travel, so it feels fierce. The steering is heavy as you pull away but lightens quickly, so it never feels to be a problem. The gearshift is rifle-bolt precise (with apologies for the cliché). The engine, an XK once again but with over 300bhp, feels strong from the offset, not fussy as you’d expect a race engine to be, but full of torque and gusto.

And then you start to wind it up some more, and you realise that with so little weight and so much power, the D-type is seriously fast, capable of over 170mph in its day. Imagine that behind that tiny flyscreen! It also feels incredibly taut and precise, so that your every movement counts, but brake hard, turn hard into the corner and accelerate out, and the D-type does everything that’s asked of it without drama, making you realise that much higher speeds would have been no trouble at all to it.

Driving the D-type was the highlight of the day. You won’t be allowed to jump straight into it without acclimatising in other classics first – but the experience of driving it feels like a once in a lifetime opportunity, so if you get the chance, just do it!

How to book your day

There are several variations on the Classic Driving Experience available. The ultimate starts at 9am with a tour of the Classic Works HQ, then heads to the test track, where the cars featured here (or the nearest equivalents if there are any problems) are available for drives alongside an instructor, or even just passenger rides if you'd prefer, until 5pm.

This experience books up fast, so we'd advise booking now. It's £650 for the day, including lunch and refreshments. Not a small amount, but we'd thoroughly recommend it. You can book it on the Jaguar Classic website here.

Full details or booking is on the Jaguar Classic site here.