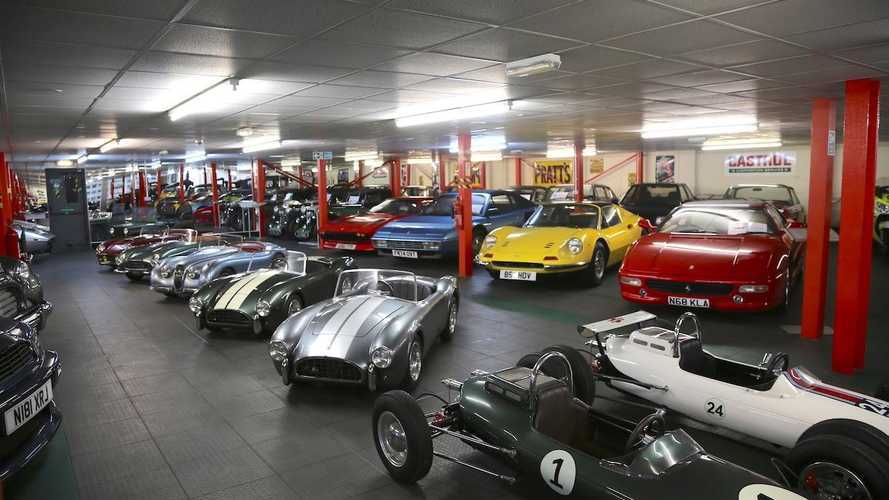 Take a look around more than 420 classic cars, from microcars to prototype supercars – and 25 'wedge' Lagondas. You might be surprised where it's located...

'If I see something for sale, and if I can afford it, then I buy it,’ says Rodger Dudding as we tour the first part of what’s thought to be the largest private collection of classic cars in Europe.

‘There’s no rhyme nor reason to any of it. People say, why not concentrate on one brand? Because it’s boring! After you’ve seen one, you’ve seen them all.’ And he grins, chuckles, and – clearly loving the contradiction – points out the first three of no fewer than 25 ‘wedge’ Lagondas that reside in his collection.

This is Rodger Dudding, the antithesis of all those car collectors who buy purely with an eye on increasing values. Rodger buys because he loves cars, and he’s loved buying cars ever since his business took off in the late 1960s.

Rodger's collection, Studio 434, is located in Potters Bar, Hertfordshire, just off the M25 and only 15 minutes from Kings Cross station. It has quietly grown to more than 420 cars, many of which are hired out for TV and film work, weddings and chauffeuring work. .

Alongside this, there’s a thriving car storage business and now a photographic and film studio, thanks to a huge new building, named Studio 434/2. First, though, a tour of the original building with Rodger and collection manager Luis Santos…

‘This was the local tram shed,’ explains Rodger. ‘I bought it 12 years ago, and we put in a mezzanine floor. The idea was to use the ground floor to store other people’s cars. Then some idiot called Dudding bought more cars…’

The result is a madcap collection of Rodger’s cars, from microcars to pre-war racers to one-off styling bucks. The ground floor is overwhelming initially, not helped by its low ceiling and the mirrored back wall reflecting the collection back at you.

But the cars! There are too many to list but the ground floor is dominated by the huge, black one-off George Martin special edition Rolls-Royce Wraith, bought by Rodger in 2017. Behind the Wraith is a line-up of magnificent working scale model cars, while to the sides is a Dino 246GT, Jaguar E-type, Series 1 Land Rover, a one-off AC Zagato and many, many more.

In a room to the side of the automobiles, there’s a collection of motorcycles, just as varied as the cars. Triumph Bonnevilles, Velocette, a beautiful Triton special, Ducati, early 1970s Japanese, a Harley and Douglas Dragonfly. 'I had one in 1957. I’ve got two now!’ says Rodger, with obvious pride.

Upstairs has an airier feel thanks to the open pitched roof, showing off the original iron roof girders. There’s another, later, E-type, two stunning Ford Consul Capris, one coupé, one saloon, in matching colours, an Austin-Healey 100, a Porsche 911 GT3 and the most important car of all – a ‘putty-coloured’ 1952 splitscreen Morris Minor that belonged to Rodger’s father. ‘It’s my most valuable car,’ says Rodger. ‘I will never sell it.’

As random as Rodger might claim the collection to be, there are stories about many of the cars, bikes and memorabilia. Take the glass cases full of model cars: just any old collection? No, these are from none other than the late Jack Odell, founder of the Lesney company, which made Matchbox models.

Rodger lives next door to the Odell house, where Jack's widow Patricia still resides, and he became great friends with them. Odell sold Lesney and, in 1982, formed Lledo models. Rodger promised Patricia to look after the models, and they’re in pride of place in tall glass cases, overlooking some of Rodger’s most prized cars (including the Lotus M250 styling buck] and motorcycles.

But this place is packed, and it’s easy to see why Rodger had to go looking for extra premises. When a factory unit came up for sale on a nearby industrial estate, Rodger snapped it up. The metal-clad building was an empty shell, and huge, but Rodger wasn’t content to leave it as it was, and had the roof raised by 30 feet to allow five mezzanine floors to be added.

Rodger offers to drive me across to the new building in his other Rolls-Royce Wraith, which seems as good a time as any to find out how he made his money. Now in his 80s, he started out as an apprentice in the Royal Navy but damaged his back in an accident out at sea, and was forced to leave the Navy and take up more conventional jobs in marketing. It was during this time, in the mid-1960s, that he had an idea for a queue management system.

You’ll know the idea. You take a ticket from a machine, and a number flashes up when it’s your turn. Rodger was convinced it would work, and remortgaged his house not once but three times to get the new idea off the ground. He was near penniless and at the point of giving up, when the DHSS took up the idea – and Rodger’s good fortune began.

Some years later, he was offered ten lock-up garages. ‘What the ____ would I want those for!’ he asked. But he bought them – and now has around 16,000 lock-ups, by far the largest lock-up empire in the UK.

We arrive at Studio 434/2, amid substantial security. It’s not long been open but already there are around 350 customer cars in the lower storage areas, while the top floor has been set up as an events space – it’s already hosted a fashion shoot and the Ferrari Owners Club (below), among others. To one side are two large, state-of-the-art conference rooms, with views through to two floors of classic cars.

Rodger gives the full tour, not just of the cars but showing off the sprinkler system, which uses stainless steel piping rather than the usual mild steel (‘well it rusts, doesn’t it’) or plastic (‘It would melt in a fire!’) and a huge water tank (‘Just in case the water mains are cut off’). Then there’s the huge key safe, the CCTV room, the kitchens and even the spotless bathrooms.

‘I’m the Howard Hughes of car storage,’ says Rodger, going all serious for a moment. ‘I check the toilets at restaurants. I must have immaculate toilets, immaculate basins, etc, wherever I am.’

But back to the cars, and we start with the 1968 Jensen FF that started it all. ‘This was the first motor car that I owned that I didn’t have to part-exchange in order to buy the next one,’ says Rodger. ‘Now I have nine Interceptors, including three FFs and a convertible – that convertible was my worst ever buy. It was rotten throughout.’

But the nine Interceptors is nothing compared with Rodger’s wedge Lagondas. He’s just bought another, taking him to 25, including one previously owned by Dodi Fayed (which he keeps parked next to Princess Diana’s Audi 80).

Roger attempts to explain the unexplainable: ‘I bought my first one in 1981,’ he says. ‘I went home with it and my late wife Gloria said “It’s horrible!” But I loved the design; to my mind it’s beautiful. It shows true blue sky thinking from its designer William Towns. He didn’t just copy existing cars.’

Rodger has examples of each of the four series of the wedge Lagonda, and one has every piece of exterior and interior brightwork plated in 18 carat gold. All 25 of the cars are in running order, and Aston Martin acknowledge that Rodger’s is the largest known privately-owned collection of the model in the world.

There are other favourites too: Range Rovers feature heavily, including a rare CSK model, as do Clynos, because Rodger’s father owned a Clyno during World War 2. He professes to ‘adore’ Fiat 500s, old and new, and he recalls spotting what he thought was a storage customer’s 1937 Topolino in the line-up and commenting ‘That car’s gorgeous, how long has it been here?’, only to be told that ‘Rodger, it’s yours!’

And that’s the problem with owning this many cars. 'I bought a white Rolls-Royce Corniche,’ recalls Rodger, ‘but when I told Luis he said “You’ve already got one!” Oh well, I’ve got two now!’

There are rules to the collecting though. No restoration projects unless absolutely necessary (‘Restoration is a nightmare!’), and fair dealings in all transactions. This, says Rodger, is crucial with the lock-up business because cars are often found in the garages that he buys.

‘We bought several lock-ups in North London at auction. I went to look at what I’d bought; opened one, it was full of rubbish – we spend £10,000-20,000 a year clearing rubbish from lock-ups – so we moved a couple of boxes and there was a headlight smiling out at me. Eventually we expose a car covered in dust, with a Lagonda badge. In the next one, there’s a Bentley MkVI.

‘So I phoned the solicitor in charge of the sale, introduced myself, and he said “Nothing to do with me, caveat emptor”, and put the phone down. Arrogant ____. I phoned him back and told him about the cars. They’re 99.9% my property but that’s not moral, so I offered to buy them. It’s all about morality.

We head back through the customer storage bays [no pictures allowed] as Rodger explains that ‘We give the same amount of attention to a Triumph Herald as to a Bugatti Veyron – because the Herald probably means more to its owner than the Veyron does – and back to the waiting Rolls-Royce.

‘If I had an ounce of common sense, I wouldn’t do this,’ concludes Rodger. ‘But I haven’t!’

And with that he heads back to his office to get back to running his multi-million pound property business, with the occasional break to browse through the latest auction catalogues…

For more on the collection, car storage and events bookings visit the Studio 434 website or contact general manager Luis Santos or co-ordinator Aneta Dlugowolska on +44 (0)1707 642514.