Bangernomics: Across the Baltic in a £900 Jaguar 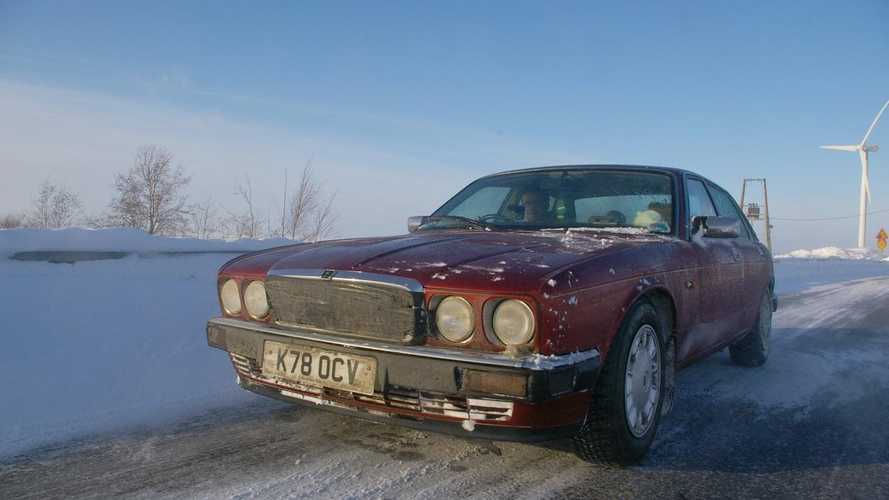 Old Jaguars – especially the XJ40 – are notoriously unreliable. So how will this aging £900 example cope with driving across the frozen Baltic Sea?

Every winter, as temperatures plummet to thirty below zero, large swathes of the Baltic Sea relinquish their liquid state and freeze, forming vast ice sheets off the coasts of Estonia, Russia, Finland and Sweden. Where the ice freezes thick and hard enough, it is able to support the weight of a car, and industrious locals build ice roads across the sea to access islands offshore.

As someone who is always on the lookout for new automotive adventures, the prospect of driving across a frozen sea seemed rather unmissable, so a vague plan was drawn up, a charming old Jaguar XJ6 3.2 purchased for £900 and for a few weeks, quizzically perusing Baltic sea ice charts became part of the daily routine.

To give us the best chance of finding open ice roads, we planned to leave in early February, but due to an unseasonably warm winter, with one week to go none of the Ice was thick enough to support the weight of HMS Jag. However, a couple of days before the XJ6 left for the Baltic, a late freeze sent the ice into overdrive, and our dream of driving on a frozen sea on a 22cm layer of ice became viable.

Pesky work commitments meant I wasn’t able to travel with the Jag on the first leg of the trip from England to Estonia, instead making plans to fly to Tallinn, joining the Jag five days after it left the UK, and just in time for the first planned ice road.

The Boeing’s wing dipped as it turned onto finals, revealing a frozen ocean, dotted with islands and glistening in the sunlight.  As we touched down, HMS Jag was still 200 miles south, purring its way through the snow from Riga.  After effortlessly clearing customs at Tallinn’s airport, I got the bus to the old town and went for an explore, passing time until the car arrived.

And arrive it did, at about 6pm that evening, covered in 2000 miles worth of grit and grime, and looking rather sorry for itself in the half light, with its trademark chrome grille swathed in gaffa tape against the cold.  Tom and Laura jumped out surprisingly full of energy after their 6 day marathon – and promptly dragged me back into the pub I’d just vacated for a cheap pint. Or seven.

The following day we nursed our hangovers 80km east from Tallinn towards the coast, the town of Haapsalu, and the start of our ice road adventure.  At the time of our arrival in Estonia, two ice roads had been opened – a 10.2km route across the sea ice to the island of Vormsi, and a shorter one from Haapsalu to the Noarootsi peninsula - a far cry from the previous year, when all 6 of the possible ice roads were in condition, stretching up to 25km across the Baltic.

We headed for the longest ice road first, attached the union jack to the back of the HMS Jag, and were soon driving along a track of compacted snow as the shoreline passed unseen beneath us.

Estonia’s Ice roads have a rather esoteric highway code – no seatbelts, no vehicles over 2.5 tonnes, no stopping and no cruising at between 30 & 45km/h.  After firing up a stirring rendition of ‘Rule Britannia’ on the stereo, we accelerated up to a comfortable 70km/h cruise and wafted across the ocean, a ferry slowly plying its channel in the ice a few hundred metres to our left.

There was no unusual sensation which accompanied driving on the frozen sea ice, nothing to differentiate the experience from driving on a frozen backroad, other than the constant niggling thought that there was less than a foot of ice keeping two tonnes of car and the Baltic Sea a safe distance apart.

It didn't take long before we wafted up onto the shores of the island of Vormsi, having put a seven-mile sea crossing behind us. Quickly realizing that out of season, there’s not a huge amount to do on said island, we promptly spun the Jag around (literally) and headed back across the ice, beating the ferry back to the mainland by about 90 seconds. Not that we were racing...

We then headed over to the second ice road.  Shorter but twistier, it offered a similar experience, but with the bonus that corners provided the opportunity to have some fun with the rear wheel drive Jag, drifting it like a rally car on the friction-less surface – lairy oversteer on the Baltic sea was, quite frankly, a box which needed ticking!

Satisfied with our first taste of driving on a frozen sea, we spent a pleasant evening sightseeing in Tallinn’s old town, before boarding a ferry to Finland the following morning.

The pack ice fractured easily as the ferry bulldozed its way into the Port of Helsinki.  Still in the Eurozone, entering Finland was a formality, and we were soon heading north across an endless land of rolling forests and lakes, with just over 400 miles to go to the day’s goal of Oulu, a port and university town near the northern end of the Bay of Bothnia, and home to one of Finland’s more famous ice roads.

The first 200 miles of the drive were fairly uneventful, despite the roads being an unconvincing mixture of grit, tarmac and ice, banked by snowdrifts and covered in veils of blown spindrift.  However, after dark, the spindrift worsened, and became so blindingly illuminated by headlights that it was impossible to see the road for worryingly long periods of time.

For 4 hours we pushed on through the grit and ice patches in various degrees of blindness until we reached our evening’s destination, full of relief.  Once again, the Jaguar never missed a beat, purring through the day’s drive without so much of a hiccup.

Refreshed by a full night’s sleep, the sun shone brightly as we approached the ice road the following morning.  We stopped to attach video cameras to the Jag, and as we did a local car emerged after attempting the road, stopped, wound down their window and advised us rather persuasively not to attempt to drive the 8km route. But attempt it we did.

Everything went smoothly until we were a few kilometres from shore, when some patches of waterlogged gunk appeared in the smooth ice of the road, signs that the surface had thinned to a point where it was unable to support the weight of a car.

Unable to stop and turn around, we were forced to swerve around the rotten ice, forcefully ramming the poor executive saloon through snowdrifts at the side of the road when there wasn’t room to drive round the bad ice cleanly, covering the windscreen and sending plumes of white powder high into the air.

After about 500m of this, our luck ran out, and we were forced onto one of the rotten sections of ice, which promptly gave way beneath the wheels on the right hand side of our hefty steed.  Fortunately, I’d been driving rather quickly since the dangers began, and 40mph was just sufficient to skim the Jag’s right-hand-side wheels over the disintegrating ice and onto more solid ground.

Keeping the foot down and swerving around further thin ice and ‘Baltic potholes’, we soon reached an area of bad ice spanning the entire ice road, fortunately preceded by an area of ice solid enough to turn around on.  Mustering Monty Python’s rallying call of ‘run away’, we spun the car around and headed back to shore, ramming into the snowdrifts at the side of the track to avoid the worst looking ice – including the bit we’d broken through, which now had two sea-filled tire tracks clearly visible.

And even through this, the Jag never missed a beat.  There can be fewer more satisfying ways to spend £900 than on than a 20-year-old XJ6…

Following our close encounter with a non-frozen part of the Baltic, we decided that heading inland to dry (well, icy) land was the order of the day.  And when in Finland, inland destinations don’t come much more appealing than Arctic Lapland – hence a 60 mile detour from the Baltic coastline to Rovaniemi, Arctic Finland’s most hyped tourist destination.

After a day spent taking the Jag across the Arctic Circle, wafting past Santa’s official residence, failing to spot the northern lights and hooning around on snowmobiles, we spun our gripless, wafty steed around and began the long drive home.

Entering Sweden, the first sight which greeted us was, fittingly, an Ikea – so meatballs all round were the order of the day, before we carried on south through a worsening blizzard, which for about 100 miles made both visibility and grip distant memories.  Given the poor ice forecast, the relatively high temperatures and our recent near-sinking, we decided to give our planned attempt on the ice road near Lulea a miss, and so drove on to the university town of Umea, halfway down Sweden’s Baltic coast and on first impressions, home to a population which was almost entirely drunk.

We then continued to Stockholm, where we spent a pleasant day wandering around beautiful Stockholm, its canals choked with pack-ice glistening in the sun.  The next day Copenhagen beckoned, following by a final stop in Amsterdam, the Jag taking the long days on the motorway completely in its stride, wafting along in perfect comfort and winning us all over to the rightness of Jaguar’s approach to things.

And so, fourteen days and 4,950 miles after it left the UK, the unflappable, wonderful Jag returned home to Devon.  Predictably, the car remained completely unflustered and reliable to the last, and hence the trip around the Baltic became the first adventurous road trip I’ve ever completed without actually breaking down.

If you ever find yourself at a loss for some midwinter excitement and fancy an excuse for a wintery road trip, I’d heartily recommend a lap of the Baltic, and a visit to Estonia’s ice roads, preferably in a classic Jag. And if there’s one bit of advice I’d give, it’s that if a Finnish local tells you not to do something, listen to them; they know best.