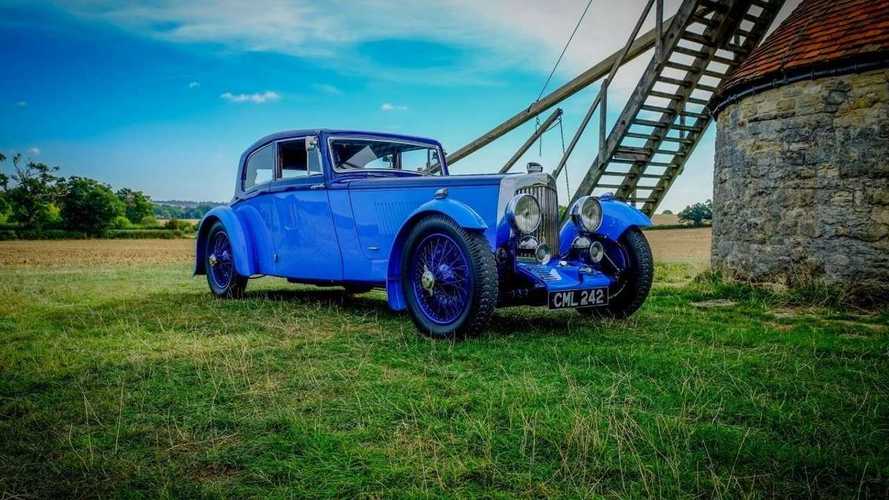 A pristine pre-David Brown-era Aston Martin with motorsport heritage and an interesting restoration story is on our classifieds. You wouldn't want to miss out on this one

Before it was known for grand tourers driven by suave British spies, Aston Martin had racing blood coursing through its veins. The Aston Martin MkII succeeded and built upon its previous Le Mans model, packing 73bhp from the same 1.5-litre litre engine that other MkII variants ran.

The difference between the standard two and four door MkIIs and the sports saloon was a roof – handy for keeping the darned British summer rain out of the cockpit. Which makes it a great choice of pre-war classic to buy from our classifieds.

The additional bodywork made the car heavier, but unlike many poorly executed roofing exercises, was executed by revered car designer and racing driver A C Bertelli. Pre-David Brown and post the First World War, the Bertelli era was an important era of Aston Martin and the first not stewarded by the founders of the business Robert Bamford and Lionel Martin.

Ecurie Bertelli, the sellers of the car, specialises in restorations of such pre-war Astons and has given this sports saloon a once-over, ensuring it stays in concours conditions. With 4,000 drawings of original parts, they can manufacture from new pre-1940 parts to original specification. In other words, there's probably nowhere better to buy a pre-war Aston from.

The stronger chassis, improved engine and counter-balanced crankshaft meant the MkII was almost as well suited for motorsport as its Le Mans-competing predecessor. Chassis L4/524/L, otherwise known by its registration plate ‘CML 242’, started competing two years after production, entering the 1936 RAC Rally with its first owner F A Rhodes.

Some years later, in the 1970s, this car was owned by a Dr Dudley Heath. He displayed it at various concours events, albeit with a redesigned boot enclosing the rear wheel. In 1983 the car featured in a magazine and on a poster celebrating Aston Martin cars from pre-WWII.

In 1981 Aston Martin was sold once again, this time to Victor Gauntlett, who set about trying to build a collection of every model the company had made. He bought ‘CML 242’ but eventually gave up on the wider venture, and donated the car to an auction in support of Great Ormond Street Hospital. It failed to sell, but eventually found its way into the ownership of Ecurie Bertelli.

At the time the car had a recorded mileage of around 81,000, and was in a far from brilliant condition. Plaster had been used to fill in the sunroof, the windows had had lugs brazed onto them and were screwed into the bodywork, and the stanchions inside the bonnet had been cut down with a hacksaw so that a gravity-feed fuel tank could be installed.

The spare wheel had been repositioned inside the car, which gave it a much smoother boot profile but weakened the body, as a main timber had to be cut away to make room. As a result the door pillars were bulging outwards. There was also a fair amount of rot in the frame.

In 1989 the body and chassis were rebuilt, using a body from another sports saloon. It took four years to complete, but by the end of it the roof, windows and body looked as they should have before falling into disrepair.

The engine was also in need of repair, but before doing so the car entered several European tours and one 2,000 mile one in North America that ended at the Pebble Beach Concours, where it won its class. At this point the engine was rebuilt, and 'CML 242' has been used occasionally since. It can be viewed and tested at Ecurie Bertelli’s showroom in Olney, Buckinghamshire, so visit our classified listing) to find out more.