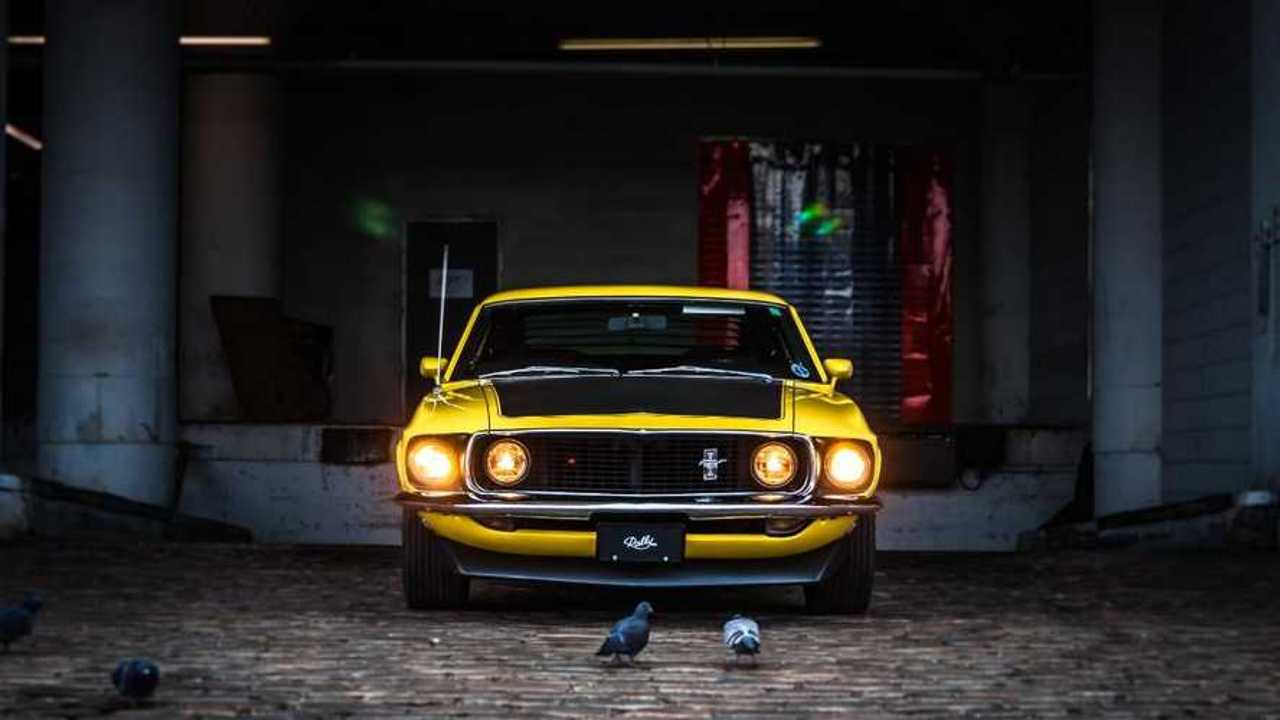 New York start-up Rally Rd hopes to transform how we invest in collector cars by turning vehicles into assets with tradable shares. It’s an interesting concept…

Classic car enthusiasts have known for a long time the potentially exponential value of a carefully selected vehicle. They’ve always understood how a hedonic mix of history, originality, provenance and sheer driving pleasure can combine to form a literal investment vehicle with appreciation potential. The rest of the world has now realised this – and is rapidly joining in.

According to Knight Frank’s Luxury Investment Index, cars have outperformed every other tangible investment such as watches and jewellery over the past decade, rocketing in value by 457 percent. But unless you’re already an extremely wealthy individual, getting a slice of that pie is often beyond reach.

So, what if we could get a taste of that appreciation pie for ourselves, despite being well short on the required purchase price?

A start-up technology company in New York is hoping to transform collector cars into tradable assets for those not blessed with near-infinite wealth. Rally Rd aims to ‘democratise’ the classic car investment market by allowing users of its platform to purchase shares in a vehicle, rather than pick up the tab for the entire purchase cost.

Think of it like buying shares in a company – except in this case, a company that has only a single asset to its name, a collector car. From a small-scale investor’s perspective it appears a solid proposition. While there’s no less risk involved than other types of capital, there’s a chance of attaining higher returns, at least if current appreciation rates don’t enter a downward spiral.

But what about classic car aficionados who would look at a Bloomberg terminal and think they’re reading modern-day hieroglyphics? Should we be welcoming such a concept into the classic car community, or have our guard up against swashbuckling profiteers aiming to scoop up collector machinery?

Although coming from a Wall Street investment background, Rally Rd CEO Christopher Bruno is keen to stress that this isn’t aimed only at professional traders. It is putting accessibility first by basing its platform around mobile apps.

New vehicles are periodically added to Rally Rd’s database – acquired through a mixture of private sales and auction buys – and sold through an initial offering, with an average of 2000 shares available for investors to purchase. Once those are successfully sold, each car has defined trading windows where users can buy and sell existing shares in each vehicle.

Initial offerings are currently limited to 32 US states, but international expansion plans are at the top of Bruno’s priority list. The United Kingdom, continental Europe, Australia and South Africa have all been earmarked as Rally Rd’s prime markets outside of the US.

While holding a keen interest in classic cars, this is Bruno’s first venture into the sector in a professional capacity. For every shrewd investor there is a speculator, someone who doesn’t understand the precise reasons why a share will increase or decrease in value, but who invests on a gut feeling anyway. Thankfully, Bruno appears to fall into the former category, not the latter.

‘We have a pretty strong set of criteria. We work only with matching-numbers cars and matching-colours cars, we work only with cars that have been restored by domain experts, or original cars. So we’re pretty strict for where we’ll draw the line in terms of investment grade.’

This might be his first professional venture into the classic car sphere, but Bruno is being diligent about which automobiles he brings to Rally Rd’s users. Rally Rd utilises an advisory board that includes valuation experts at Hagerty to help select vehicles for its platform, with each share offer containing vehicle histories detailing changes of ownership and restoration works, along with plenty of images for inspection.

There’s already a mixture of ‘assets’ currently in play, as Bruno commonly refers to the cars using his investor parlance. Vehicles already trading on its platform range from a Jaguar XJ220 valued at $495,000 all the way down to a $16,500 7-Up edition ‘Foxbody’ Ford Mustang. The XJ220 might have plenty of prestige, but the latter has been the most popular car to date, with all 2000 of its shares being snapped up nine minutes after it was listed.

This is where Rally Rd’s ‘democratising’ ethos stems from. It doesn’t own the cars in question outright, either before or after sale. It brings in a wide variety of classics for initial offerings, all in a condition approaching concours standard, rather than taking a punt on cheaper vehicles that require a little TLC to maximise their value.

If a car is offered and doesn’t sell out its 2000-share offering, nobody pays – much like an auction lot that fails to meet its reserve. Rally Rd works to source the vehicles, but in the end it’s the users who would own the vehicle collectively who decide whether a car joins Rally Rd’s platform.

‘I hope they see us as people very much like themselves who love this market, who are professionals, who have done really well in our own field and have a real connection to this asset class,’ continues Bruno. ‘I hope people ask questions and [use] their own judgement on our platform and use the information we give them to do so wisely.’

That variety of collector cars on offer raises another point of concern. Unlike individual owners who might see their highly treasured classic investments as thrilling playthings – throwing them sideways around Goodwood or hauling them around the globe to prestigious concours events – the primary goal of a vehicle in Rally Rd’s portfolio is a financial return on investment.

But that’s not why most of us got into this community to start with – we like experiencing these machines, driving them, listening to the burble or roar of their engines, admiring the finer details of their design. Although Bruno is keen to protect each ‘asset’ that joins Rally Rd’s portfolio, he was quick to allay fears that prized collector cars would be locked away, never seeing the light of day.

A first step in opening up Rally Rd’s collectively owned line-up of vehicles is its partnership with Mecum Auctions. While there’s undoubtedly an element of promoting the platform involved, cars currently in Rally Rd’s collection feature at each of Mecum’s auctions around the United States.

‘We want to be a part of the community, and that’s important to us,’ says Bruno. ‘The purpose of our partnership with Mecum is exactly that, to show the cars regularly at places where a lot of car people are showing up.’

Rally Rd’s public footprint extends to concours events, too – for instance, bringing one of its soon-to-be-listed vehicles along for Monterey Car Week last month. There are further plans to expand accessibility, with a first retail ‘store’ planned for New York city where all initial offerings will occur, alongside a rotating selection of vehicles from its existing collection. Bruno likens this concept to ‘coming to see something and take home a piece of the museum’, albeit not in physical form.

One might argue that this still takes vehicles out of active circulation and road use, making it no better than a private investor hiding away all his newly acquired physical assets for safe keeping. Keen to rebuke that point of view, Bruno points out that most of Rally Rd’s cars would still see more use than if they had been sold elsewhere, even if its shareholders aren’t allowed to drive the vehicles they’ve purchased a piece of.

‘Many of these cars are more likely to be locked up in a private collection and never shown than they are with us, so it’s a core part of what we’re doing. It’s definitely not a rental car business – we’re not trying to take risks with people’s investments in any way – but as part of being an investor on Rally Rd, it’s your ticket to experiences.’

These experiences are part of Bruno’s grand vision for the platform. He cites one particular vehicle in Rally Rd’s collection as an example; its 1969 Boss 302 Mustang valued at $119,500. If this was to be taken to a track day and let loose, one person’s exuberance could theoretically turn it from looking pristine to sitting in pieces. Even after executing the insurance policy that is attached to each of Rally Rd’s investments, it’s likely the other 1999 owners would be rather displeased.

Instead, Bruno would plan to bring along a Mustang of similar performance and style for investors to sample first hand – a way for shareholders to sample their owned asset without putting their investment in peril.

Our conversation took place less than 24 hours after plans for Aston Martin to be listed publicly on the stock market first broke. This naturally brought about comparison to Ferrari’s massively successful initial public offering in 2015, which surprisingly offers more validation to Rally Rd’s concept than anything else.

‘When we were out at Monterey a few individuals came to us and mentioned that “when the Ferrari IPO came out, I just had to invest because I wanted to be part of that brand, a part of that company and its history”.’

And that’s where Rally Rd as a concept strikes a chord. There’s no doubt that we’d rather be driving these cars and bring them home to our own garage. But ultimately we accept there are some we’ll never have the means to attain, whether due to affordability or impracticality.

For some that might mean an Aston Martin DB7 is within reach when they’d really like a DB5; for others it might mean running a Honda CR-X when they have fantasies of buying an NSX. I personally still pine over owning a Tommi Makinen Edition of the Mitsubishi Lancer Evo VI, but it’ll never happen – so I might be tempted to buy a share or two in one should the opportunity ever arise. And if it affords me the chance to take a standard Evo VI around a track for a bit of fun, even better.

Rally Rd appears a reasonable investment proposition, but it’ll be a true investment in the sentimental spirit of classic car collecting only if there is a tactile, experiential element. It might be deliberately framed first and foremost as an online investment platform, but should Bruno’s grand plans for the cars’ physical presence come to pass, then Rally Rd will be worth embracing.