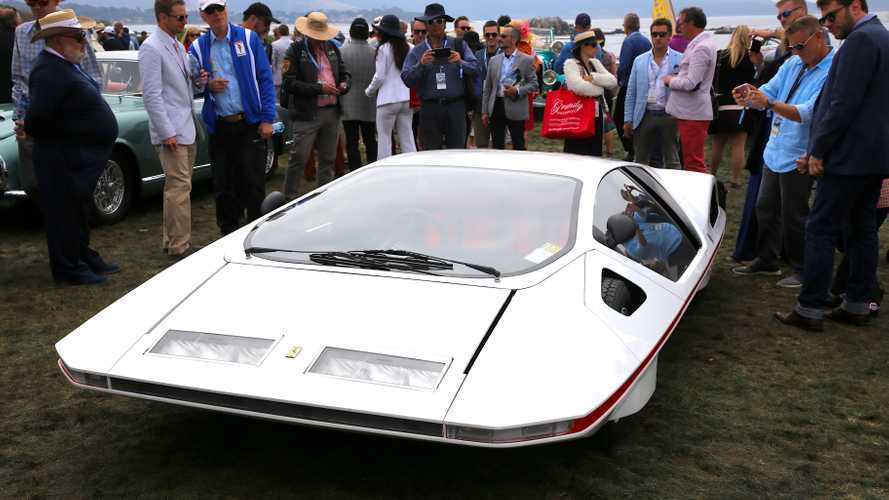 The legendary 1970s Pininfarina concept car is back, and now it drives for the first time ever. Owner Jim Glickenhaus explains how it was done

The Pebble Beach concours is no stranger to outlandish, crowd-stopping vehicles. Good grief, there were even the famous swan cars a few years ago.

But this car, this remarkable, eye-popping creation, beats them all. It might be little more than crotch height, but in presence it’s head and shoulders above the rest (click for more mad Pebble Beach 2018 cars). And even if you’d been lucky enough to see the Modulo at some point in its 48-year past, you won’t have seen it like this before.

Why not? Because for the first time ever in the Modulo’s life, it drives. Not just back and forwards or round and round a test track, but on normal roads. Apparently legally… And all thanks to American car collector and now supercar and race car constructor Jim Glickenhaus. Read on to hear how he achieved the impossible.

The story of the Modulo is almost as unlikely as its own appearance. It was the creation of Italian coachbuilder Pininfarina, designed in-house by Paulo Martin, and came about when Ferrari handed over a 512S race car to Pininfarina.

The 512S was a serious machine, designed to compete in the 5-litre sports car class at Le Mans. It was powered by an all-new 60 degree V12 mounted behind the cockpit and producing 550bhp, in a steel and aluminium chassis. It was a potent mix but heavier than its deadly rival, the Porsche 917, and there were struggles with reliability and speed.

Due to this, of the 25 cars that Ferrari were required to build for homologation, only 22 were sold. What to do next? Well why not donate a car, the 23rd built as it happens, to the Ferrari coachbuilder of choice to create a publicity-grabbing show car – after all, Pininfarina was responsible for the majority of Ferrari designs from 1951, with the last one the F12berlinetta, which was only replaced in 2017.

Responsibility for the design fell to Paulo Martin, fresh from rival Carrozzeria Bertone and only 26 years old when his wild Modulo creation was unveiled. He’s now also known for cars as wide apart in terms of style, price and indeed size as the Peugeot 104 and the Rolls-Royce Camargue – with the lauded Fiat 130 Coupé sat between them.

For the Modulo, Paulo Martin went a little wild. An extreme wedge shape, enclosing all four wheels except for the top of each one exposed. Over the engine, 24 large circular openings give a view of the downdraught carbs feeding that hungry V12. Still more radically, a one-piece sliding canopy incorporating roof, windscreen and side windows, gave access to the interior.

And that interior was almost as mad as the exterior, with huge sills, two laid-back seats in bright red located close together, separated only by a narrow divider, angular, cloth-covered dashboard and tiny deeply-dished steering wheel. There are spherical pods on either sill, the passenger's simply a fresh air vent, the driver's also neatly incorporating the switchgear, and the gearshift to the driver's right, again on the sill, sporting the traditional Ferrari open gate.

At Pebble Beach it's attracting quite a crowd, but stood a few metres away, as cool and quiet as ever, is owner Jim Glickenhaus. He's a car collector, known for his restyled Ferraris and, more recently, for his Scuderia Cameron Glickenhaus race team and car construction business, building race cars and supercars, as well as a homage to the famous Steve McQueen Baja Boot.

So, with Jim stood so near to the Modulo, there’s an obvious question that has to be asked: ‘Could we see inside please Jim?’

Jim slides open the canopy, to a comedic gasp from the crowd of onlookers. It glides effortlessly, surprising with its smoothness, exposing the entire cockpit. Maybe it's not the most practical access solution in many ways but my goodness it makes a low supercar with wide sills one hell of a lot easier to get in and out of.

Inside, the Modulo is basic but stylish. What's it like to drive?

'It's really good, it's got enormous torque no it's problem at all,' says Jim from behind his wraparound shades. 'The motor runs cool as hell – coming down here [onto the concours lawn] from the trucks it was bumper to bumper and it was 70 degrees Fahrenheit. No problem.

'We've driven it about 100 miles. It rides really good. Koni did a good job, they rebuilt the shocks, we told them what we wanted. There's very little been re-engineered. A lot of it [stories of the car being undriveable] was myth.

'Pininfarina had put in spacers which pushed the wheels out; we took them out. We put it back to 512 S spec and the geometry was fine. We used a little different steering rack, a little shorter ratio, one of my [Ferrari] P4 steering racks. The car starts, key starts, it runs amazing. The bodywork is original, we didn't have to do anything to it, and underneath it’s all 512 S.'

'What do we do next? We drive it around! It took us four years, we did it in Italy – we're the first owners, we bought it direct from Pininfarina.' And with that Jim is swamped again, the open cockpit having attracted more onlookers, more questions.

A little later, the Modulo is called up onto the concours stage, and we watch as it drives past, remarkably smoothly. It trickles through the crowds, onto the ramp, back down, slowly through the crowds again... and then a gap opens up and Jim gives the throttle the slightest nudge, and the car briefly surges forward, exhaust and intakes blaring for just long enough to cause a shiver down the spine.