Classics for sale: Is this the most beautiful Alfa Romeo ever? 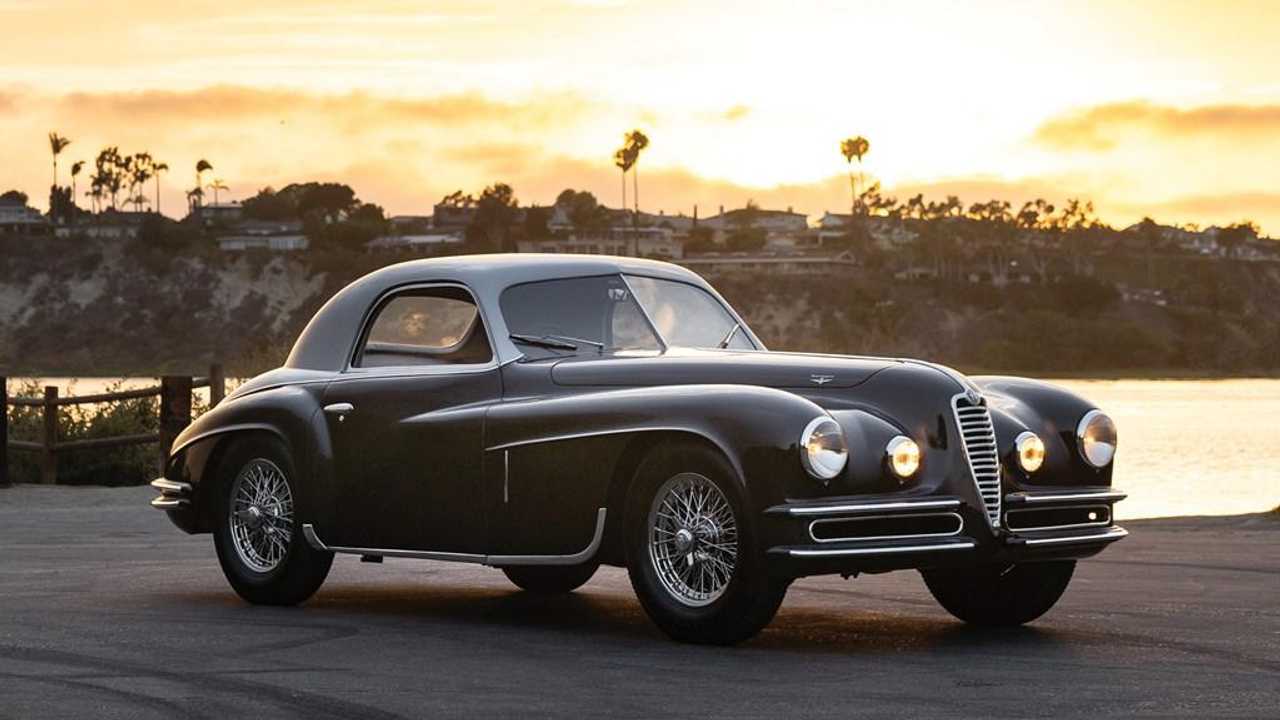 Stop the world, we’ve found the best-looking Alfa of all time – which makes it the most beautiful car ever. This 1949 car is going up for auction today!

Cars from the 1940s are slow, ungainly and lacking in moral fibre because of the war effort, aren’t they? Not always, as this mesmerising 6C 2500 Super Sport Coupé by Touring proves. Not a single design aspect is even an inch out of place. The shape, the colour, the wheels, the chrome; frankly, I’ve never fallen so madly in love with a car before.

Technically, it’s thanks to riotous war-time action from the allies that we have this grand machine to worship today. Because we Brits are so loving, we sent out aircraft to bomb Alfa’s Portello factory for Valentine’s Day, February 14, 1944. Not quite content with the flaming destruction now only witnessed when a 156 heads for MoT, we bombed the factory again on August 13 and October 20.

There was good reason for this. The Portello factory was no longer making Alfa Romeos; instead, the asbestos roof hid the manufacture of weapons destined to prolong war in Europe. After the RAF had its way, the factory lay dormant.

As Hitler and Mussolini’s forces crumbled to dust, Alfa was left with a problem. In order to survive, it would have to change course. No longer could it stomach the finances to continue constructing coachbuilt models for the elite – most of whom were now dead.

Rather, the coveted marque would have to produce cars for the masses – the first example of which arrived in 1947, as the 6C 2500 series. Although based on the pre-war 6C 2300, the freshly styled post-war series incorporated a berlina, two-seater coupé and cabriolet, and four-seat convertible. Bodies were supplied by Touring, Pinin Farina, Stabilimenti Farina, Boneschi and Ghia.

Under the bonnet lurked a 110bhp, dual-overhead-camshaft, 2.4-litre inline-six engine featuring hemispherical combustion chambers. Even that sounds sexy. Yet, for all the vehicle’s allure and positive sexuality, only 383 6C 2500 SS chassis were produced.

Unlike most models that waver in the light of contemporary automotive fashion only to recover decades later with scarce remaining numbers, the Alfa 6C remained a favourite with coachbuilders, discriminating owners and collectors from day one.

A frequent recipient of awards at the Concorso d’Eleganza Villa d’Este during this period, the 6C’s stuffed trophy cabinet also includes winning accolades from both the 1949 Coppa d’Oro (selected by jury) and the 1949 Gran Premio Referendum (selected by the public).

This example in the AutoClassics classifieds is up for auction today at Pebble Beach. Bearing chassis number 915831, the subject of my affection was imported to Switzerland in May 1950 before falling into the custody of a private banker residing on the shores of Lake Geneva. As a piece of trivia, he was a neighbour of Hispano-Suiza engineer Marc Birkigt. Five years on, the car was gifted to the banker’s brother, then living in Morocco, who maintained it until the 1970s.

During the 1990s it passed through Germany, where it was restored, before being shipped to the US and acquired by Swiss collector Marc Caveng. It was with Caveng that the Alfa was refurbished in the stunning two-tone combination you see here.

In addition, chrome wire wheels were added, while carpets and headliner were installed by Franzini Bros. Following the refresh, the car was then invited to the 2015 Pebble Beach Concours d’Elegance, where it was exhibited but not judged.

Not quite content with the car’s ever-improving concours stance, UK-based Jim Stokes Workshops was then hired to rebuild the engine, gearbox and drivetrain at considerable cost.

Digging further into the car’s history, it emerges that the original engine block – no. 928141 – was replaced some time ago with an identical period unit. Not that it takes away from the Alfa’s renowned concours history. Get a closer look with the AutoClassics listing.

Gallery: Classics for sale: Is this the most beautiful Alfa Romeo ever?