Porsche 356 and GT2 RS; driving the past and the present 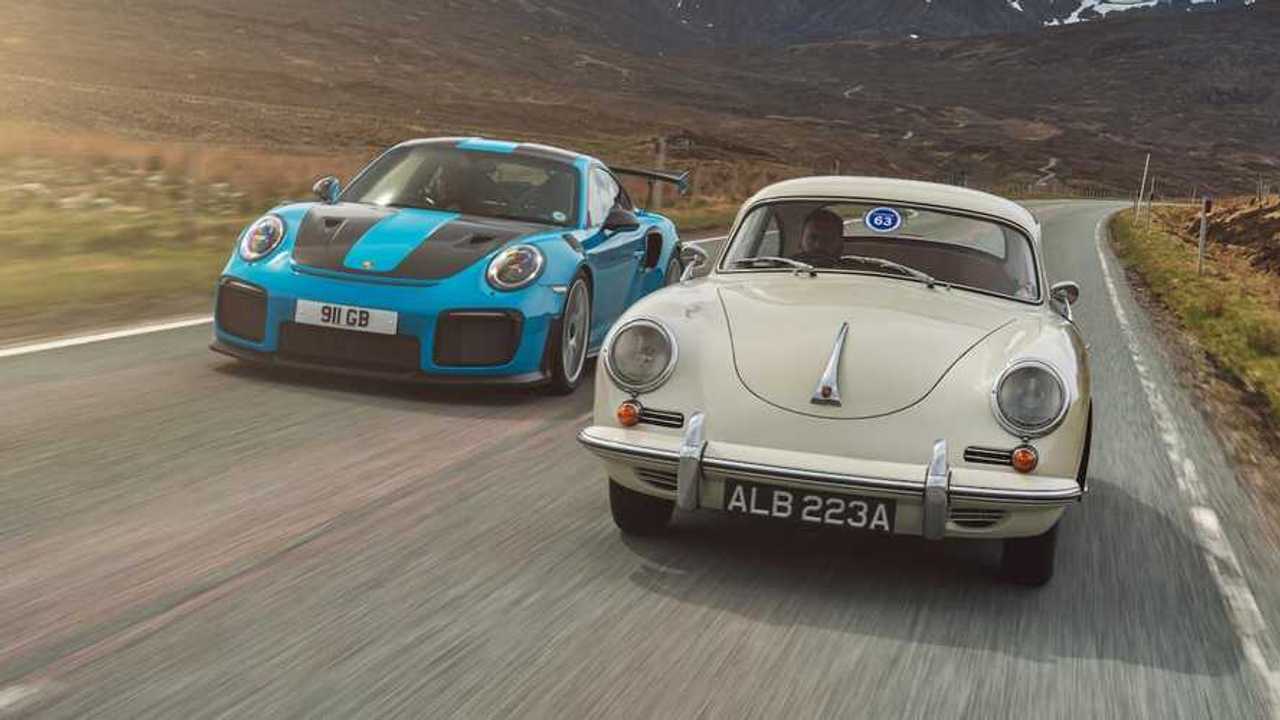 In Porsche’s 70th anniversary year, AutoClassics exclusively compares one of the brand’s first models with its fiercest-ever road car

Let’s get this out of the way now, shall we? The Porsche 356 here is a B, from 1960. That means it’s 12 years shy of celebrating the same 70-year anniversary as the company that built it. The 356 was Porsche’s first proper production car, though – and it set a theme that remains at the company’s core today, that of evolution as opposed to revolution. This has stood the brand in good stead. Seventy years’ worth…

The lineage is clear from those early hand-built aluminium Gmund coupés Porsche produced in 1948, which evolved into the 356 A, the B, then the C and, latterly, that sports car icon, the 911. Which brings us to the GT2 RS. It’s the ultimate 911 available today – and the latest, if we ignore its ‘mere’ 520bhp GT3 RS relation. With the GT2 RS, 700bhp plays against the 356’s 60bhp. Forget the usual cliché of ‘knife to a gunfight’; throwing the 356 into the mix is like bringing a firework to a nuclear war.

It’s an unfair comparison, no doubt. The 356’s 60bhp might look puny because, today, it is. There were faster 356 models, but that’s not really the point. The car’s 16.5-second 0-62mph time and 96mph top speed aren’t relevant, although they do give me something on which to hang the relative performance on offer from its 211st century successor. The GT2 RS can reach 0-62mph in 2.8 seconds and top out at 211mph. When the 356 hits 62mph, the new car will be passing 162mph.

It’s in front of me now, briefly, before it vanishes up the Scottish road ahead, the twin-turbocharged 3.8-litre engine’s intake sounding like it’s sucking all the air from the valleys to create a vacuum for it to accelerate through. The little 1600cc flat-four puttering away behind me doesn’t seem in any way deterred from the task in hand, which might seem fruitless against such adversary but it isn’t so clear cut as raw figures.

Having driven the GT2 RS fairly extensively, I know its ludicrous ability to bend time. Whether on an Autobahn, circuit or here in the Highlands, the GT2 RS is an era-defining 911. In it you feel forces for which you once would have needed to apply to NASA; the GT2 RS is physicality shocking, brutally so if you exploit all of its performance. The 356 is different, although it’s impossible not to imagine that those who drove it against it contemporaries might have felt like we do about its insane great, great, great – I lose count – grandchild.

For all the differences, there are some clear, core signifiers that these cars share DNA. One is the engineering integrity of each; just clicking the 356’s door shut underlines that, such precise engineering being part of the reason these cars were so successful when they were running off the production line.

Given its vintage, the fact it can still be driven as it would have been back in the day is real testament to that build quality. This is a classic car that doesn’t need to be mollycoddled, as it revels – demands even – that you do in it what it was designed for; drive. This is exemplified by the rev counter sitting directly in front of me, as every Porsche before and since features that dominant visual reference to the engine powering it. The speed is incidental, then, an aside to the pleasure in operating the car.

The instruments are situated behind a wheel that’s vast in circumference, featuring a rim no thicker than a stick of seaside rock. It’s in stark contrast to the small-diameter, chunkily-rimmed device you hold in the GT2 RS, yet visually they’re clearly related. It’s not just because of their surrounds, but is due to their design, too, both being split three-spokes with the Porsche crest in the centre surrounded by a detail line of chrome.

The wheels that the 356’s massive steering wheel direct are so small they’d be swallowed, tyres and all, by the 20 and 21-inch rims on the GT2 RS. Proportionally the current model is in a different area altogether. That it’s a GT-division car means it’s adorned with all the addenda that its racing homologation and purpose demand of it, yet underneath the wind-shaping and -exploiting wings, intakes, vents and scoops, the familial link to the 356 is tangible, described in the simple, almost natural line that rises up from the front and tapers down over the rear.

Materially, chrome might now make way for carbon fibre, metal badges now stickers, but fundamentally these cars are clearly from the same gene pool – more obviously so than offerings from any other company.

Both are the result, too, of Porsche’s engineering stubbornness. Rather than ditching the boxer engine slung out behind the rear axle, the brand has persisted with it, engineering out its eccentricities and arguably making these advantageous. The company will talk of the packaging gains such an unconventional layout bring, and, undoubtedly, how the 911 is the world’s most accomplished, practical sports car – at least in less extreme guises, where there are rear seats instead of the GT2 RS’s cage.

The marque will also roll out the traction benefits of such a format, although in reality it’s taken a good deal of the 911’s life before Porsche really conquered some of the less favourable rear-engine traits. It has, though – that engineering enigma defining the company without diluting the appeal of any 911, or indeed the 356 before it.

‘Utterly joyous’ is the only way to describe the earlier machine. It’s simple and uncomplicated, the steering – once you work through the slight off-centre deadness – crisp and accurate. The 356 feels nimble and light, with eager turn-in and fine control. Compared with the GT2 RS in the bends it rolls like a terrier in fox poo; enthusiastically, then, but always with the promise of a quick exit.

The engine’s 60hp is accompanied by 110Nm of torque, yet these combined outputs have to shift only around 900kg. That lack of mass helps not just the flat-four out back, but the entire 356 in the corners – which, given the tiny contact patches of rubber, is no bad thing.

The gearshift, as with the steering wheel, is exaggerated in its proportions compared with the stumpy automatic PDK lever in the GT2 RS. Yet the long shift slotted though via a tall, spindly lever is pleasingly accurate, featuring the same finessed weight and precision of all the 356’s controls. No it’s not as blinkingly quick as a paddle-actuated shift from the GT2 RS’s seven-speed dual-clutch automatic, but it doesn’t need to be.

If the 356’s speed is determined by how much you’re prepared to put into it, then the GT2 RS is something different altogether. It’s effortlessly quick anywhere, there being no need to maintain momentum or think about gaining speed when you’ve got 700hp under your right foot. There’s the merest of pauses to a push of the accelerator, then the GT2 RS just rockets forward, that incredible powertrain pummelling physics and creating other-worldly pace.

In order to achieve this, Porsche has gone as far as spray injecting the intake manifold to reduce temperatures and up performance in the twin-turbo flat-six. It might be genetically linked, but it’s a fairly radical evolutionary leap from the air-cooled flat-four in the 356. Indeed, just one of the GT2 RS’s pistons is able to muster up almost double the power of the 356’s entire engine.

Yet, for all the abundant, monstrous performance on offer, there’s delicacy to the GT2 RS’s controls. Forget, if you can, the forces acting upon you when you drive it, and you’ll discover that same fine detail, the same nuance to the controls that define it and the company that builds it.

Everything happens faster, much faster – but that speed doesn’t corrupt the sensation or the pleasure in driving it. Self preservation is the limiting factor, not because there’s any doubt that the GT2 RS has the ability to stop, carry cornering speeds or even cope with the vagaries of UK tarmac, but because if you’re caught doing anything like the speeds its capable of you’ll be spending some time away from the car. And your family and friends.

At road speeds it’s an exercise in restraint, then. This can prove frustrating, but such is the modern performance car. Progress, undoubtedly – although while you’re enjoying the GT2 RS’s low-speed engagement, you’ll be thrashing the 356 to keep up, and having a ball doing so.

That’s 70 years of evolution for you, and true of any modern-to-classic comparison. What’s central to this one, though, is that, despite the huge passage of time and the technological advances that have come with it, the two cars retain much the same character – the same engineered, decisive engagement that defines not just the best sports cars themselves, but the brand that created them.

What the next 70 years of Porsche will deliver is anyone’s guess. But if the company can keep hold of what it has, then it’ll continue to be onto a very good thing. I wouldn’t bet against it, either.

Gallery: Porsche 356 and GT2 RS; driving the past and the present