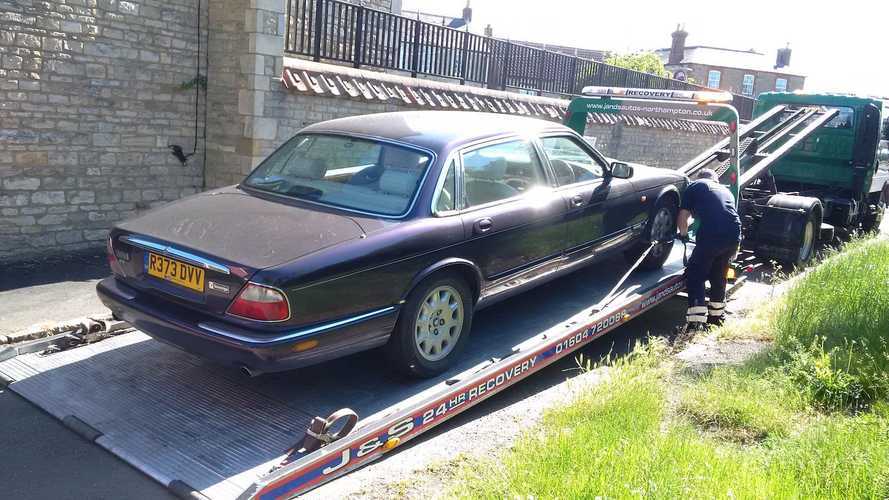 Classifieds are awash with cheap X308s, but should the price tempt you into ownership? Here’s our experience with a £1000 4.0 XJ8 Sovereign; it ain’t pretty…

There are few phrases that grate on me as much as 'champagne motoring for lemonade money'. It conjures up images of somebody who has let life pass them by, trying to convince the outside world that they’re not a failure. This has nothing to do with why I bought a Jaguar X308 for £1000. Honest.

Yet anyone looking to perpetuate a grandiose self image could not go far wrong with the 4.0 XJ8 Sovereign I ran last year. Finished in a colour that can only be described as UKIP purple, its long-wheelbase body sagging under the weight of the driver’s superiority complex, it certainly made a statement. What exactly that statement was, I don’t know, but it probably wasn’t a very nice one.

But there’s more to life than image. I bought the Jag because it drove even better than its fairly low 120,000 miles would suggest. Also, unlike the shambolic X300 that I ran previously, it was immaculate. This still didn’t stop me from being slightly nervous about my new car, though. X308s use Jaguar’s AJ-V8 engine, a powerplant that’s known for its reliability issues.

A false sense of security...

After two trouble-free months, I relaxed. A specialist had seen the car and given it a clean bill of health. However, my confidence in the Jag was shattered (quite literally) one morning when it started to chuff steam out of the bonnet in the office car park.

The plastic thermostat housing had split, despite the specialist telling me mine was fine. The coolant top hose broke away from the cracked housing, and it now stuck up in the air as if the engine was giving me the middle finger. A flatbed truck arrived. An aluminium housing was ordered. Bolts were sheared on the driveway when I tried to replace it myself. Another flatbed arrived – this time to take the car back to the specialist, after a slightly tense phone call.

The Jaguar returned two days later, and lasted 700 miles before the next flatbed was needed. This time I had some scenery to look at while stranded, because Hampshire County Council does a nice daffodil display on its roundabouts in spring.

Driving through Portsmouth late at night, I’d noticed the low brake fluid light briefly flicker on the dash. Making a mental note to check it in the morning, I turned up my jazz CD and relaxed.

Approaching a roundabout that carried an advertisement for a local BMW dealership (maybe it was trying to tell me something), the light come back on – and stayed on. I decided to stop where I was and check it, but the brake pedal flopped uselessly to the floor. Two tons of Jaguar was now cannoning towards the roundabout, so I chucked it onto a grass verge, sparing the BMW advert and the daffodils.

Once again, I found myself standing uselessly to the side, watching my pride and joy get winched onto an IVECO Daily. Further investigation discovered that the copper brake pipes were so badly corroded they’d come away from the fluid reservoir.

After the copper pipes had been welded up, I’d enjoyed a further 1000 miles without incident. I got the car serviced and even had the air-con repaired. This bangernomics barge was turning into something worth having.

That was until it had its most spectacular failure of all. While I was driving back from a day out, late at night, the Jag started to make a creaking sound from the rear. This quickly developed into something that sounded like a filing cabinet falling down the stairs.

I pulled over on a pitch-black road near Peterborough to inspect the underside, and saw nothing obvious. Feeling uncomfortable hanging around there at night (and I’ve seen Deliverance), I decided to make a slow crawl home with the hazard lights on.

A better look in the morning revealed the source of the noise; the nearside output shaft had collapsed. Fighting the urge to introduce Mr Jaguar to Mrs Baseball Bat, I was forced to book the car in with a Jaguar main dealer, which was the only garage in the area able to take on the work at short notice (I needed the XJ8 back for a trip). To the dealer’s credit it was excellent, but its repair bill exceeded the purchase price of the car.

Soon after, I put the Jaguar on the market, and thankfully I managed to get most of my ‘investment’ back, although God knows how. I didn't want to take the same route a friend of mine had taken by lying on the advert and pulling the wool over people's eyes, so it took some time.

I now know what statement that car made: ‘I am very stupid’. If you want to prove this to the world, there are cheaper and less stressful ways of doing so. Like stopping a chainsaw with your genitals or watching Love Island.

Would I recommend a cheap Jaguar X308? If you have the bank balance of an aristocrat and the patience of a saint, then go for it. If you are given it for free and it’s not likely to catch fire in a multi-storey car park resulting in the breakdown of your tattered respectability, go for it. If none of the above qualities apply, run a mile.

All credit for the ‘Bangernomics’ term goes to journalists Steve Cropley and James Ruppert.