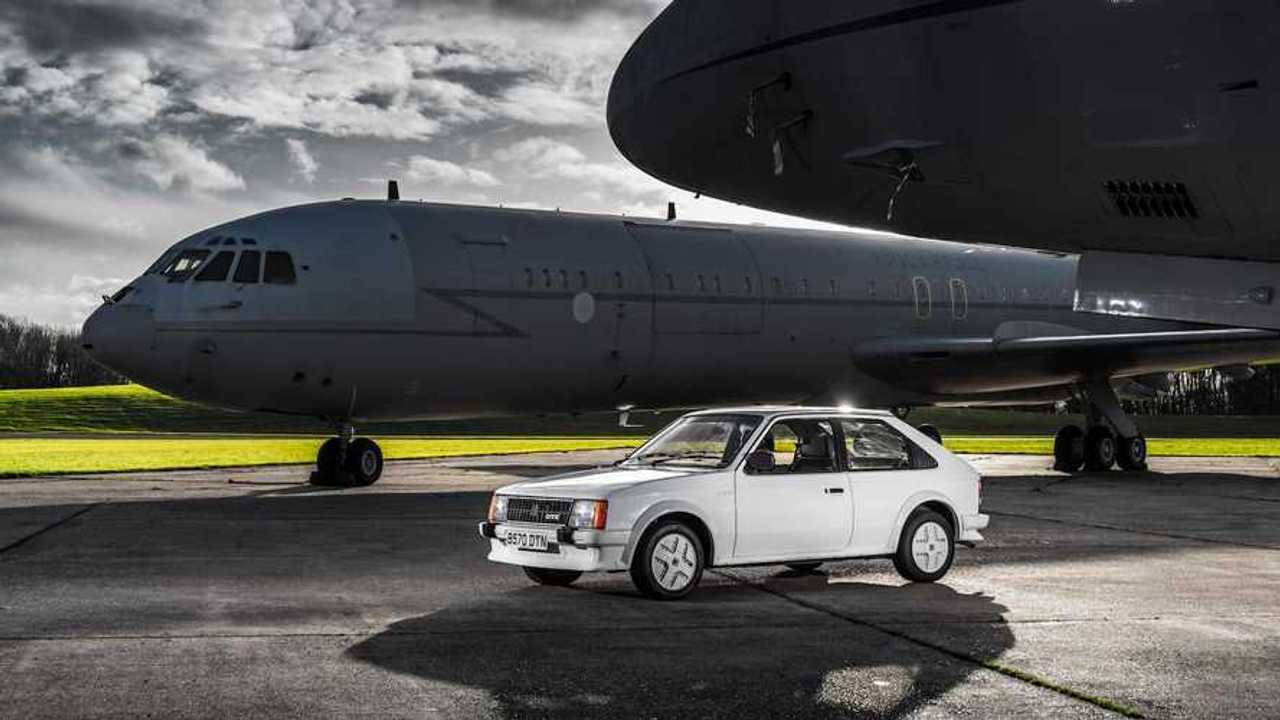 It was six long years after the emergence of the first-generation Volkswagen Golf GTi in 1977 that Vauxhall added a serious contender to the hot hatch market.

Although this segment is far more congested today – think entries from Hyundai, Honda, Renault and more premium, power-laden contenders courtesy of Audi’s RS3 and Mercedes’ AMG-breathed-on A45 – arriving more than half a decade late in the fight against the Golf cost the Vauxhall Astra GTE Mk1 heavily.

More than 460,000 GTis were produced, compared with only 10,000 or so GTEs. While the Golf is a firm classic, the GTE carries a much smaller following 35 years on. But that’s an unfair reflection of how endearing the Vauxhall is to drive.

Just walking up to the GTE envelops you in something of a time warp. The flared arches, sporty bumpers and skirts plus plate-like wheels are all matched to the white body colour. With design by straight line, the boxy shape has aged well. The GTE is certainly of its era, but it looks refreshingly simple. Compare it with, say, a current-generation Honda Civic Type R, and there’s little doubt to which model time will be kinder.

As you climb into the Recaro seat, you’ll see that the interior follows a similar trend. The dashboard is a single, angular lump of plastic in which the dials, cassette player and radio are all housed. As a pleasing tonic to most of today’s offerings, it puts function well ahead of design.

The doors are so thin, it feels as though a half-decent punch would make a substantial dent, while one suspects they would offer virtually nothing in the way of meaningful crash protection. But that’s soon forgotten. If you focus on what’s ahead, and catch sight of the GTE logo that replaces Vauxhall’s Griffin in the centre of the steering wheel, you know you’re in for something extra special.

In many ways, the GTE is given a tough task to impress its driver today. AutoClassics is pushing it around Bruntingthorpe Proving Ground’s circuit, dovetailed with a lesson from Formula 1 driver coach Rob Wilson.

He uses the current Astra as his training wheels for the likes of 2007 champion Kimi Raikkonen and rising star Esteban Ocon. With light power steering, responsive brakes and a sense of safety from the pilot’s seat, the new car frees up brain space that allows the driver to focus on nailing racing lines and dropping their times.

By contrast, simply pressing on in the original GTE is a much more consuming process. With zero assistance, the steering requires some heft while manoeuvring, but it doesn’t shed much of its weight at medium to high speeds.

That makes navigating the circuit’s fast left-right sections a physical process. Suddenly your priority changes from glancing one apex and then another in the shortest distance and fastest time, to instead just making sure you’ve got enough lock in each direction. Perfecting the details gets shuffled way down the order.

However, in turn, the steering is part of the GTE’s greatest appeal; its on-the-limit handling. The car’s relatively skinny tyres ensure that the edge of grip, and where the most fun is had, is attainable. And at the limit, it’s completely neutral. With 115bhp and 111lb ft of torque produced from the Cavalier SRI 1.8-litre four-pot, it never torque steers or scrabbles for traction as you bury your foot on a corner exit.

Equally, if you carry too much speed into the corner and follow the knee-jerk reaction to lift off, it remains totally compliant. The rear axle doesn’t try to overtake the front as it would in a Peugeot 205 GTI – renowned for its oversteering antics – which means a clumsy driver can come away with their dignity intact.

The engine itself does feel on loan from the larger car, though. It takes the GTE from 0-60mph in 8.5 seconds and grumbles away all the while, albeit the noise lacks charisma. The motor does complement the GTE’s 930kg weight well, but it feels somewhat lethargic right the way through the range. The revs don’t come and go with ease – rather, they linger around, characteristic of a car with less of an urge for life than the GTE’s compact dimensions would lead you to believe. It’s willing, feels solid and pulls the car along competently, but is unremarkable.

The remainder of the driving experience is a treat, however. A member of Vauxhall’s own heritage fleet, this late model’s short-ratio, H-pattern gearbox is a delight to snick up and down. Its fantastically thin pillars combined with acres of glass mean it’s easy to place the car through the bends – as long as you’ve applied enough of that heavy steering in the first place.

Vauxhall’s first genuine effort at a hot hatch is a very appealing steer. While it’s the 2-litre Mk2 GTE – so skilfully driven by John Cleland in the British Touring Car Championship – that is the most revered of the earlier, spiced-up Astras, perhaps this is an oversight. The Mk1 GTE is less obvious than the Golf and more tasteful than a Ford Escort XR3i. For that, it cultivates its own charm.