Bangernomics: Fiat 126 to the Arctic Circle! 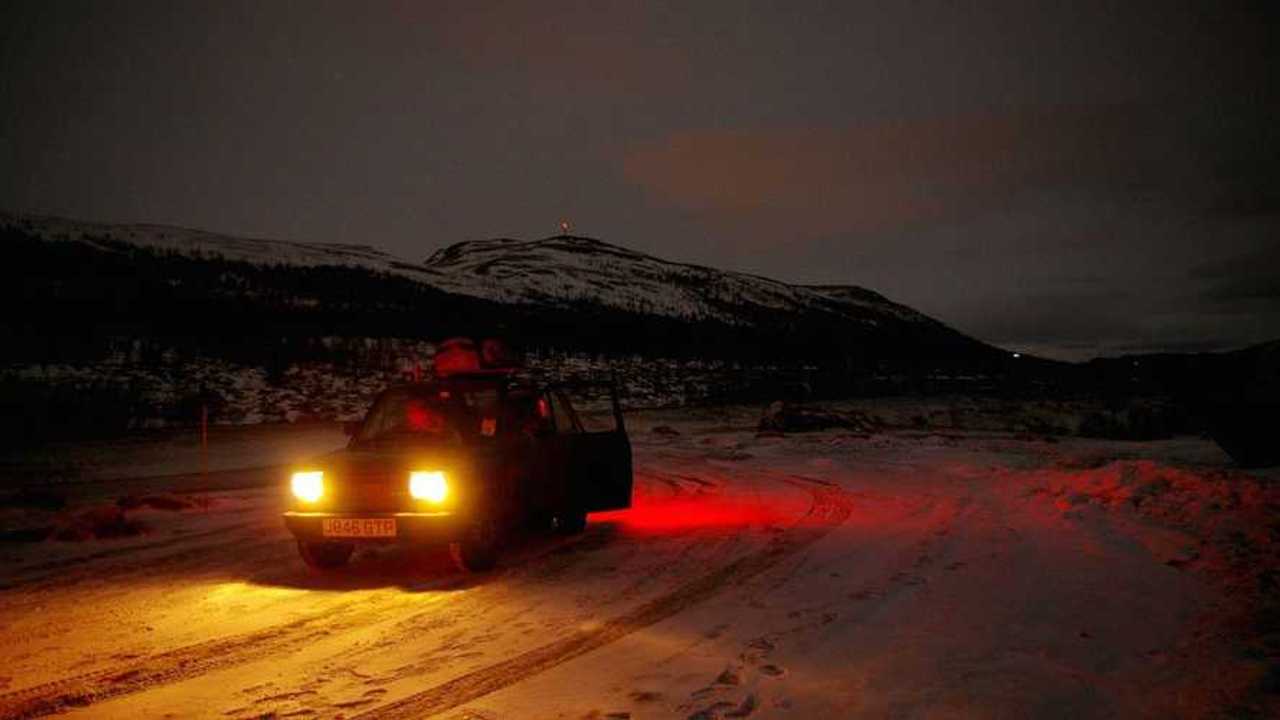 Set free by the polished ice, our rear wheels jumped suddenly sideways as we crested the rise. Brummy tried to correct the slide, but the rear-engined Fiat promptly fishtailed back the other way. One more desperate attempt to regain control, and all was lost. Helplessly wedged in the back seat, I looked on as we hurtled backwards towards an icy fjord, its dark surface brooding ominously in the half light.

We hurtled through the night, our wheels clipping the fjord’s bank as we left the road, careering onto the only flat bit of grass for miles. Wheels glissading over soft snow, the Fiat slid to a halt less than 20 feet from the water’s edge. After an endless silence, I managed to speak.

Our Arctic adventure had seemed like a much better idea in the pub a few months earlier. I’d just become the custodian of a Fiat 126 and, as a stubborn Mini fan, I had taken quite a dislike to it as I drove it home. That evening, its fate was discussed over many beers, and with perfect drunken logic we decided to drive it to ‘Hell’ – where it belonged. Hell, by the way, is a small village near Trondheim, Norway.

Brummy’s enthusiasm for the idea was such that he splashed out on another 126 to accompany my blue one – a bright yellow car, with flames painted dubiously down the side, and ‘No Fat Chicks’ even more questionably scrawled across the front wing. And so on Christmas Eve, three people and two little Fiats left Plymouth, intent on spending the New Year in Hell.

Sadly, the ‘yellow peril’ managed only about 60 miles before developing a violent misfire and repeatedly cutting out. A new condenser was needed, and as Santa generally doesn’t tend to bring spares for recalcitrant Italian classics, we were left with little choice but to cram three of us into the remaining car and push on regardless. And so, following our respective family Christmases, Brummy, Jim and I did just that, setting course for Dover on a foggy Boxing Day night.

Forty miles down the road, the blue Fiat suffered its first breakdown, spluttering to a halt after some rough running. A few minutes later we coaxed it back into life, only for it to conk out a little further down the road. The moist air and near-zero temperatures were causing the carburettor to ice up – not an ideal omen for a trip to the Arctic.

After driving through the night – and visiting the hard shoulder another seven times – we crawled into Dover at daybreak, just in time to catch the ferry. Belgium and Holland were just as cold as the UK, and our tally of breakdowns soon reached double figures, but we reached Dortmund that evening, where we spent the night with some deeply confused German friends.

‘Why are you driving to Hell? It makes no sense.’
‘Because it’s funny. And because we can.’
‘But there’s nothing there. Why drive for days for nothing?’
‘For fun.’
‘Where is the fun of being crammed into a tiny car for days? There is no fun in this.’
‘You Germans have absolutely no sense of humour.’

Following a thorough investigation into the beneficial properties of German beer, we headed north, and I sampled the Fiat’s luxurious rear quarters for the first time. Wedged beneath a pile of rucksacks, I was reduced to thinking warm thoughts while being blasted by icy air spilling in through the ill-fitting doors.

We chugged across Denmark and Sweden overnight, then spent the following day coaxing the ice-encrusted Fiat onwards to Lillehammer, and a well earned beer.

Our first round came to £18, and the evening went predictably downhill from there. With battered wallets, we ended up in a locals’ bar, where Jim and I left Brummy chatting to a rather patriotic Norwegian (‘Don’t mention the Euro. I mentioned it once, but I think I got away with it’). We returned to the hotel – which we promptly woke up by warming up the Fiat. I then disconnected the battery and strolled back to our room with it tucked under my arm, much to the confusion of the hotel’s receptionist.

December 31 consisted of a hung-over drive to Trondheim, where we saw in the New Year, before completing the road to Hell the following morning. We drove onto the station platform for a photoshoot with the famous ‘Hell – Gods Expedition’ sign; all because of a drunken pub conversation a few months earlier. Continuing northwards the sky became disappointingly cloudy, and snow showers mocked our foolish progress.

Tarmac gave way to a graded ice surface, which was surprisingly easy to drive on and enabled us to plod along at 40mph. We were surprised at how far we’d come, and were gaining confidence in the Fiat’s ability to reach the Arctic with every mile. And as our confidence increased, so did our speed – until Brummy flew over that sweeping crest next to the looming fjord, and the Fiat bit back, almost spinning us into the icy waters. Chastened, we continued more sedately towards the Arctic.

The road reaches the Arctic Circle on a suitably bleak plain, where the graded ice-road merges almost imperceptibly with the snowy expanse through which it meanders. We stopped at a sign that read ‘Polarsirkel-senteret’ (the Arctic Circle) and took some photos, lit by a few shafts of moonlight trickling through the overcast sky.

Continuing north, we swept through vistas of plummeting cliffs and perfect mountains, the clouds thickening above us. The temperature plummeted beyond -10°C as winter took control of the landscape, the drifts of snow lining the road becoming ever higher. And then the clouds were behind us, the crisp snowscape painted hauntingly by the full moon.

The further we went, the more beautiful the empty landscape became. Flooded by moonlight crystalline in its sharpness, the fjords became more precipitous and foreboding, the mountains reached closer to perfection, and even the star-drenched sky seem to move closer. And then, framed by the long-suffering Fiat’s windscreen, a faint emerald curtain draped itself across the heavens, and began to shimmer.

We pulled over to watch as the aurora built in intensity, hypnotised by its movements. It cascaded above us, shimmering playfully then disappearing, before building again with a dignified intensity only nature can produce. Sometimes, rather than sweeping through the skies, it simply hung in the same place for minutes at a time, only to rush off again without warning.

After watching the awesome spectacle for a while we were overcome by the cold, so we piled back into the Fiat and continued north, stopping every so often when the skies lit up so stunningly that it seemed disrespectful to drive through the display.

During the early hours, Brummy and Jim slept while I drove in a state of near euphoria. Hundreds of miles of empty perfection swept past the little Fiat, which a few days earlier had seemed incapable of even leaving the UK. Often, I would stop to photograph yet another glistening mountainscape, or find myself cruising down a perfect valley, the path of the ice beneath me mirroring the northern lights shimmering high above.

Even the Fiat finally felt right. Far from the vehicle from hell I’d considered it to be a few months previously, when I’d cursed its stuttering progress at the start of our journey, it had shown itself to be a car of character. Few other models could have made the Arctic experience so memorable. Certainly, no new car could compare.

Its rear-engined, rear-wheel-drive layout was great for traction on the ice, while fast, light steering made sliding the car around with the throttle an easy joy. In the bitter cold of the Arctic night, I warmed to this pugnacious little Fiat with its big heart.

Jim took over driving at about 5am, and I slept blissfully, buried on the back seat beneath a pile of sleeping bags. I was completely content with the world, as if coaxing the Fiat to the Arctic was the most natural thing in the world to do; my calling in life. A crisp twilight arrived as we reached the remote port of Narvik.

This far north, a winter’s day is almost apologetic, consisting of a few dim hours. The sun wouldn’t rise again for nearly a month.

We went for coffee, silencing the overworked engine for the first time in 14 hours, only to find that the superchilled battery was too cold to restart the Fiat. Fortunately, 10 minutes of being cuddled by Brummy beneath his fleece warmed it back into life, so we headed onwards for a quick look around the Lofoten Islands, which rise jewel-like from the ocean, 130 miles above the Arctic Circle.

As the light faded, we retraced our path through the bewitching, now-familiar landscape, with two days to catch our ferry from Bergen 1000 miles away. During the night, a blizzard descended, transforming our view into a hypnotic blur of snowflakes warping past, and hiding the road beneath a churning sea of spindrift.

The weather became so bad it blocked the road, but fortunately a snowplough rescued us, escorting us south through the storm.

Beyond Trondheim, the E16 snaked through the darkness, its sweeping curves rising and falling at the beck of Norway’s endless mountains, and testing the Fiat’s traction to the limit. We passed through the Lærdal road tunnel – at 15 miles, the world’s longest – before sweeping through Voss and reaching Bergen with a few hours to spare.

Predictably, the long ferry journey back to the UK was an exercise in drunken relief, and it was three weary, hung-over people who pulled up at passport control.

‘Just the two of you in there?’ the policewoman asked.
‘Nope, three,’ Jim replied, as a passport appeared from within the cocoon of sleeping bags on the back seat.
‘Wow, you must be really good friends?’
‘We are now!’ Brummy barked with wink and a grin, as we clattered triumphantly back onto British soil.