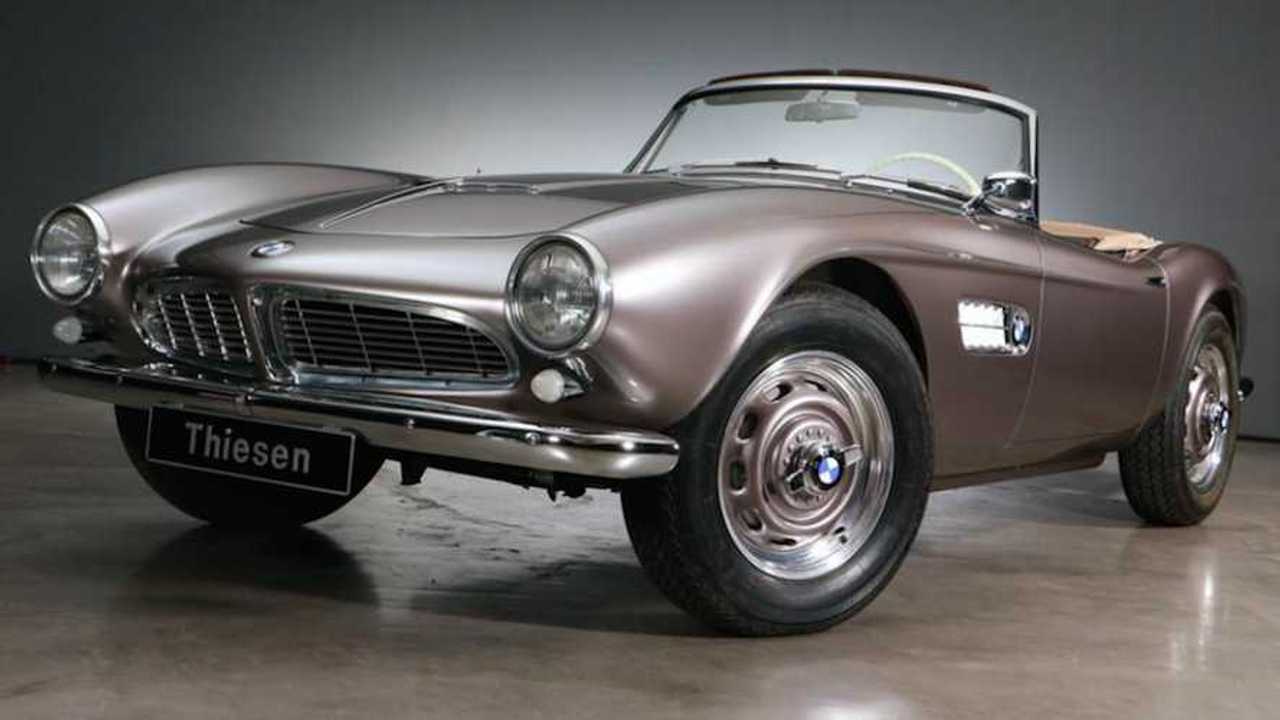 Elvis Presley may have single-handedly kept Cadillac going during his lifetime, but he enjoyed a passionate love affair with BMW’s 507. And we have one for sale!

It was on this day in 1956 that Elvis Presley set the world on fire. Showcasing his scandalous ‘Hound Dog’ hip movements on the Milton Berle Show, his against-the-grain mantra cemented Presley firmly in place as the King of Rock and Roll. Forthright parents hated him. Free-spirits loved him. Jaguar Cars Ltd scowled.

You see, while the likes of Frank Sinatra, John Barry and George Harrison may have swaggered out of a Jaguar showroom with keys to a fresh E-type, nothing came close to an association with Elvis; and the King drove a BMW 507.

When stationed out in Germany with the United States Army in 1959, the man infatuated with all things Cadillac was stopped in his tracks by a white, race-prepared 1957 507 (no. 70079). In fact, those sleek lines had spent time as a press demonstration model before being employed by racetrack hero Hans Stuck. Elvis had to have it.

A hot commodity of the time, BMW’s rival to the six-cylinder Mercedes-Benz 300SL presented an image of style, wealth and speed to a black-and-white world. Films were monochrome and newspapers were word heavy, but there was lush colour to be had on the automotive market.

It was this aspect that gave Elvis something of a headache. The colour of his example proved to be something of a target – for lipstick. Besotted fans would leave messages and phone numbers on the bodywork as the car sat outside his home at 14 Goethestrasse in Bad Nauheim, resulting in a red re-spray once Elvis brought the BMW Stateside in 1960. It was then traded in to a dealer who re-sold it for $4500.

Not that Elvis was content with purchasing only one 507, he apparently gifted another (no. 70192) to his Fun in Acapulco co-star Ursula Andress. Her husband, John Derek, who had just sold his 507 to Fred Astaire, set about customising the BMW with a colour change (from white to light blue) and replacing the drivetrain with a Ford 289 V8. Andress sold the car to George Barris in 1997 for $300,000.

Elvis’ own was also ruined, the BMW internals gutted and disposed of in place of Ford’s V8. However, once BMW themselves managed to acquire the vehicle, it was fully restored and now resides in the marque’s Munich museum. Andress’ gifted 507 was repainted white and sold twice at auction; firstly for $350,000 and then again in 2011 for $1,072,500.

Yet, while the prestige of such iconic owners certainly helped reach the final hammer price, the BMW 507’s merits champion such action without celebrity endorsement. Even if the model nearly killed the company outright.

Long before Jaguar’s E-type took the performance world by storm, a contemporary road test reported by a 1956 edition of Motor Revue clocked the BMW with a 0-62mph time of 11.1 seconds and top speed of 122mph. The model should have sold like hot cakes. It didn’t. In fact, over a three-year production run, little over 250 units were constructed.

Never reaching more than 10 percent of the sales volume required to break even, the vehicle intended to restore BMW’s post-war image instead took them to the verge of bankruptcy. Company losses in 1959 were DM 15 million (roughly €35.5 million). The problem didn’t sit with the car itself, however, but rather its incredible price tag. The 507 was simply too expensive. Back in the day, it cost more than a three-bedroom house.

Not that time’s onward march has diminished values. Now celebrated and worshipped by collectors, the ‘unsuccessful’ BMW enjoys contemporary popularity from all angles. It’s rarer than an E-type and far cooler than almost everything else. They command a serious premium, but the resulting ownership – regardless of whether for investment or driving pleasure – remains inimitable.

With so few produced and so many falling by the wayside as the decades wore on, finding a good one for sale can test the patience of a saint. Luckily we have one in our classifieds, and it’s a prime example of BMW’s craftsmanship and quality. Grab it now, for it certainly won't hang around long before it leaves the building. It's now or never!

Get a closer look with the AutoClassics classified BMW 507 advert.