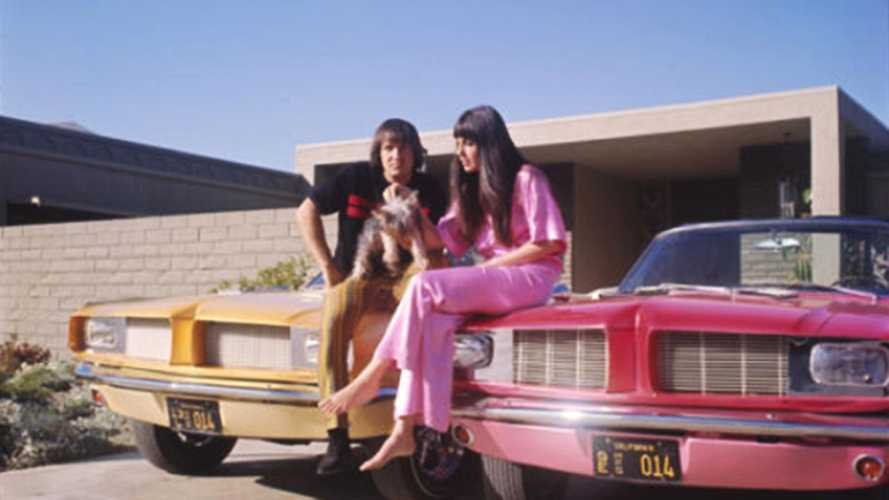 Sonny and Cher really rocked it in the 1960s and ’70s. This groovy husband-and-wife duo had charm, a knack for writing or choosing the right songs to perform and record, and legit musical talent.

It helped that they were attractive, too: Sonny, a compact guy, had the hair, (often) the ’tache and the bellbottoms, and Cher brought her own brand of smoky sexuality to the team. They were so popular they ended up with their own television show in the early ’70s.

Even after divorcing, they outlasted their legal parting to still get TV and concert audiences rocking in the aisles well into the following decade. And they sure drove a cool pair of Mustang customs.

Carmakers have long courted Hollywood, athletes and other celebrity types into driving their products. Automobiles have been part of movie and TV scripts since the beginning, but the art, science and business of product placement really crystalised in the 1960s by putting James Bond behind the wheel of an Aston Martin DB5 in Goldfinger and Thunderball, and, of course, with the casting of a Highland Green Metallic ’68 Mustang GT390 fastback in Steve McQueen’s Bullitt.

It isn’t abundantly clear how a pair of San Jose-built 1966 Mustang convertibles got earmarked for Sonny and Cher, but they did – and the cars were then handed over to the self-proclaimed ‘King of Kustomisers’ George Barris for his own brand of remodel.

Sonny’s car was designed around a gold and brown colour palette, with Cher’s sporting a dazzling, and much more feminine, pink motif. The late Barris commented that: ‘Sonny and Cher go back a long way with me. They were the hippest young couple I can remember. They dressed way out and wild, and Cher was the most beautiful young woman imaginable.’ Barris’ wife Shirley helped them each choose colours and design their ’Stangs.

Both sported power-steering and power brakes but no air-conditioning, plus floor-mounted three-speed self-shifters, faux wood-trimmed steering wheels and full-length centre consoles. They were pretty much bread-and-butter cars, which to Barris was a blank canvas.

The customiser’s body mods for both models were quite similar, including full repaints. The main colour for Cher’s car was Hot Candy Pink and Sonny’s was Murano Gold. Barris and company reconfigured both cars’ front ends, giving them silver-mesh twin grilles and a bit of a ‘beak’ in the middle about where the standard running horse and corral motif would normally rest. The stock headlights were also swapped for European-style Lucas rectangular units, each in their own chrome bezels.

Barris must have really favoured these headlight units, as they ended up on a number of his creations over time. The front-end redesign is handsome enough but, oddly, resembles an early-1960s Pontiac Tempest – something Ford surely never had in mind.

The rest of the mods were typical of Barris at the time. Each Mustang’s hood wore a pair of bright metal ‘grilles’. These were intended to look like hood scoops, but more closely resembled vent work you might find at an industrial heating and air-conditioning supply outlet; Barris was famous for this type of mod.

Each Mustang got deluxe rocker-panel trim and faux side pipes. The taillight treatments were completely custom, with their origin unknown – they somewhat resembled the wide rear lights on a mid-’60s T-Bird or a ’68 GT/CS, but were not divided into three sections as they were on those Fords, nor were they sequential.

The interiors of both cars were really over the top, as befitting of both Barris and the era. Cher’s seats were trimmed in genuine Ermine fur and black leather, while Sonny’s cabin was done up in a wild combo of bobcat fur, saddle leather and suede; both models featured very shaggy faux-fur carpeting – think of it as ‘ultra shag’.

At present, Cher’s steering column wears a Ford accessory Rally Pak gauge cluster; it isn’t clear whether Sonny’s car also did in period, and perhaps that now-valuable bolt-on disappeared along the way, or if it was never there in the first place; we guess the former.

Barris also equipped each car with a separate eight-track tape player boxed in at the leading edge of each floor console. And the driver’s seat in both his and hers was modified to swivel – something Ford didn’t offer in a Mustang. Sonny’s had a tan convertible top and tonneau cover, while both elements on Cher’s were black. And, of course, AMT produced a plastic model kit containing both cars, which is today highly prized and costs several hundred bucks on eBay.

It wouldn’t be a custom car without aftermarket wheels, and this is where the story of these cars appears to have evolved over time, as the pink one wears different rims in various photos taken at different times. In many early shots, it sports aluminium ‘wire mag’-style wheels running whitewall tyres. Meanwhile, Sonny’s Mustang is nearly always shown wearing a set of very period, retro-looking Radir mags.

Barris went on to personalise a pair of Yamaha motorcycles for the couple not long after the Mustang were done, and he remained friendly with both Sonny and Cher even after their divorce and careers that also went their separate ways. Further automotive acquisitions for Cher included several Mercedes-Benzes and a pair of Ferraris, as her recording and Oscar-winning acting career continued to flourish.

The Mustangs’ ownership situation has ebbed and flowed over the decades, and the cars have been sold and resold several time – most recently at Barrett-Jackson’s Scottsdale, Arizona auction in January 2018. The cars were logically sold as a pair, and purchased for $146,700 by Manhattan, Kansas enthusiast and businessman Ward Morgan.

Why this pair of pop-culture ponies? Ward Morgan has a substantial automobile collection, and loves TV, movie and rock ’n’ roll machines. Plus he’s well underway with plans for a car museum, which will be open to the public. His is not a collection to be hidden away in some giant warehouse gathering dust.

He favours custom cars, and particularly appreciates and enjoys George Barris’ works. His collection, and the new, as-yet-unnamed museum planned for opening in the fall of 2018, are loosely configured around the notion of cars through time and culture, of the past, present and future.

Ward has some early Fords, a few Lincolns, a ’69 Mustang Mach I, a 2006 Ford GT, a Ferrari and a Lambo. And now the Sonny and Cher Barris Mustangs. Nasayers will call these two customised Fords tacky, but those who were there – or who simply dig the looks of the times – will love every over-the-top touch.