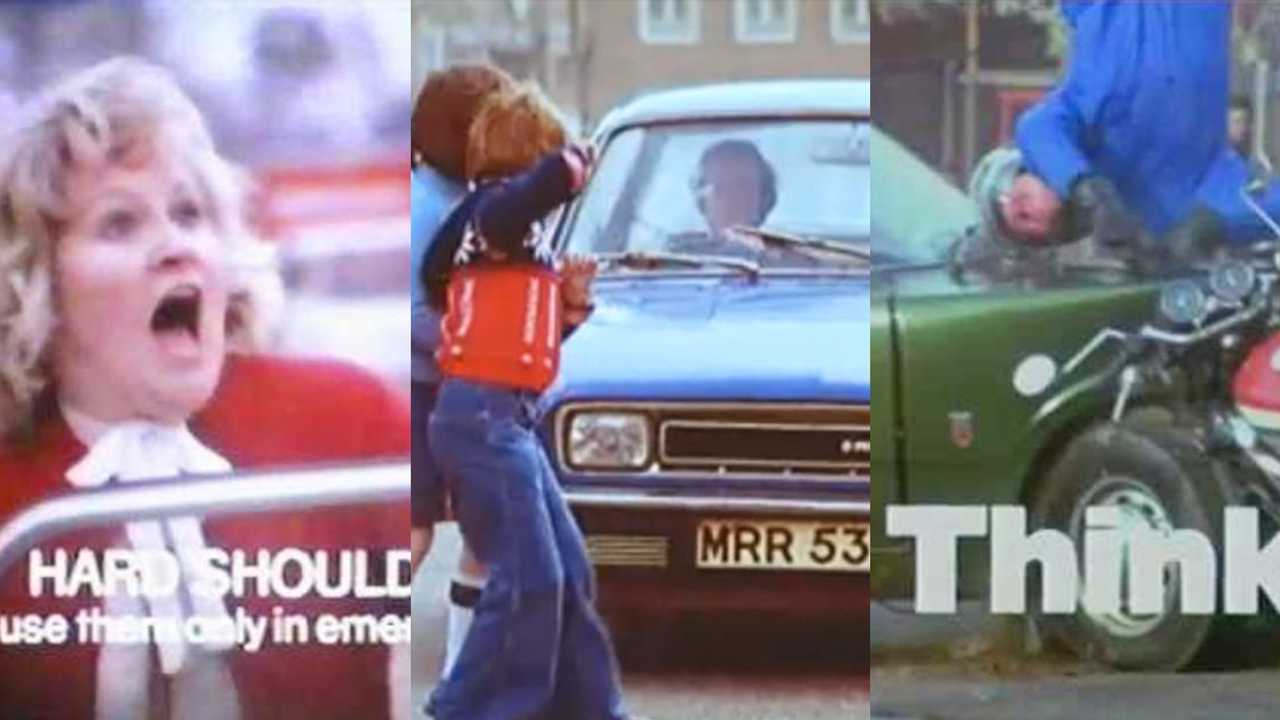 What does it take to make a hard-hitting yet educational Public Information Film? We delve into the archives to find out. Brace yourselves!

A Public Information Film, as with any popular cinema main feature, conveys social attitudes and incidental details that so often make the recent past feel impossibly remote.

To watch a 'PIF' from the 1970s is to re-experience a world of Peter Sellers-style horn-rim glasses, fawn car coats, shops emblazoned with logos for R White’s Lemonade and living rooms filled with orange-coloured nylon upholstered easy chairs.

On the roads, every third car appears to be a Hillman Avenger while various Vauxhall Victor FCs and Austin A60 Cambridges are less 'classics' and more everyday transport. And so, here are ten vital elements for a great Public Information Film.

For many years, the standard PIF narrator was a well-known character actor such as Patrick Troughton, Joss Ackland or Patrick Allen, whose velvet tones would instruct viewers as to the perils of overtaking near a T-junction.

The narrator on this particular gem is Geoffrey Keen (of later 007 boss 'M' fame), who sounds even more irascible than when he was berating Roger Moore in The Spy Who Loved Me. So, remember – ‘keep yer distance!’ and do try not to be distracted by that ultra-rare Fiat 2300 Berlina.

Quite simply, these were the cars of doom for your average PIF, a seemingly innocuous vehicle that could induce more fear than any Hammer Horror, even when running for a bus.

Here, Tony 'Socrates from Bill & Ted’s Excellent Adventure' Steedman appears as the Grim Reaper, and there is a certain inevitability that a BMC 1100 & 1300 will break the two-second rule.

As for the red Austin driven by Billy Blunders…

8. Assume the Audience Has the IQ of a Morris Marina

This masterpiece is only tangentially associated with motoring – although there is that über-1970s Austin Maxi – but it does ensure the viewer is under no misapprehension as to what constitutes a man trap. And for a change, we aren't talking about Sharon Stone.

7. A Neat Appearance is A Must

Well, at least until 1969, after which far too many middle-aged British males began to use Department S as a fashion guide. Robert Raglan gives a masterclass on how to park a new Austin A55 Cambridge MkII, as he illustrates the vital message – ‘Pride in appearance – a spur to good driving’.

And in the early 1960s even car thieves, who steal two-stroke Saab 96s in broad daylight, are a model of sartorial elegance...

When I say 'superb' I mean 'often makes EastEnders resemble an RSC revival of Titus Andronicus'. That said, this gripping 1945 short is a masterpiece of tension, and the plot is more plausible than your average episode of Casualty:

Meanwhile, only a cynic will note how the passers-by in the GPO short Help The Operator are remarkably unamazed by the lack of drivers in the crashed Hillman Minx and Triumph Herald. You can view this sort of footage here.

5. The Use of Humour

Richard Massingham, a doctor turned film producer, was the star of countless witty and very well-crafted PIFS and this example from 1948 is one of his finest. It is also a reminder that pedestrian crossings would not start to feature Zebra stripes until 1949.

And who could ignore these hip suburban beatniks and their warnings about not overcrowding your car? Even this pre-war Standard Eight – and accompanying clowns – couldn't save them.

The SPLINK campaign to publicise the Green Cross Code was well-intentioned, but it was just too complex to be instantly recalled. Even if Jon Pertwee was giving it his all.

In 1946 Alfie Bass illustrated what happens to pedestrians who do not Read and Act on The Highway Code. It was a big deal at the time.

Betchar! (1971), is an everyday story of Here Come the Double Deckers style patois and Raleigh Choppers. It not only features Peter Noone but Keith Chegwin in a gripping narrative of cycling prowess and Vauxhall Victor FD-related mayhem.

And, yes, that is Michele Dortrice and Neil Innes as the hapless Ford Cortina MkV owning couple set for a painful demise:

These were the safety films that were devised for screening in works canteens and schools, and they were frequently extremely well executed. Many readers will recall Candles for Katie, either the black & white 1959 original with a Hillman Minx 'Audax' or the 1981 re-make with a Ford Escort MkIII, with the narrator intoning ‘Someone’s going to die – remember?’.

1979’s After Dark has Colin Welland, in full Kes mode, as he tells of how 'Herbert' negotiates the roads of nighttime London, although the real fascination is in the traffic – Peugeot 104ZS, Citroën Dyane 6, Triumph 1500, Renault 16 – plus Mr W’s Princess 1800HL:

In 1971 Richard Wattis is your ultra-snide narrator as Reg Varney (who qualified as a PSV driver for On the Buses) demonstrates in his 1965 Triumph Herald convertible how to keep a safe distance.

1. The Most Effective Public Information Films

Some public information films have the power to quell all nostalgic images of past motoring. The message of 1946’s It Might Be You, fronted by a young Peter Cushing, remains pertinent after 72 years, for all the footage of trolley buses and demob suits.

Thirty years later, Front Seat Driver, directed by no less than Stephen Frears, proves there is no need for overtly graphic imagery as the horror is in the memory.

It is such PIFs that many viewers can still recall after several decades – a testament to the talents involved and the seriousness of their original purpose. It stopped a generation of us from undertaking serious risk in public - even if we were stuck with BL...