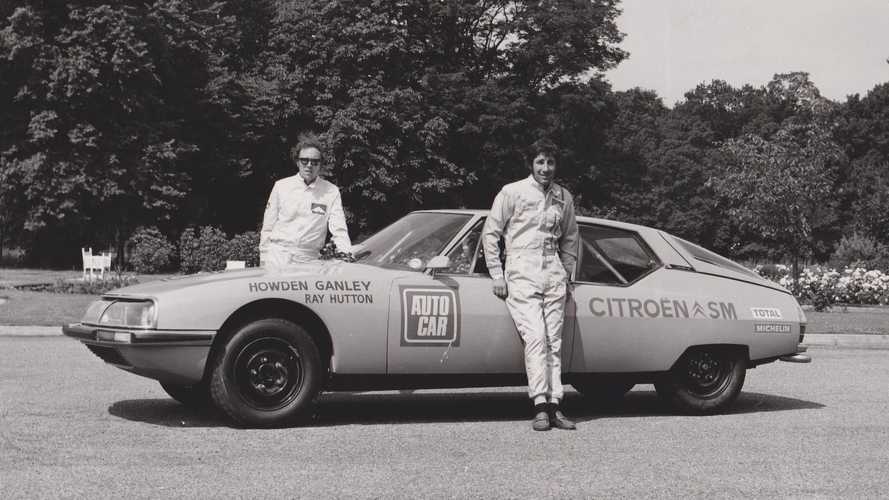 Are these the most improbable cars ever to turn a wheel in competition?

A sports car with the ground clearance of a dachshund might not be everyone’s idea of a rally car, but then we're not all Peter Davis. This serial adventurer bought his Ginetta G4 in late 1966. He still has it. In the meantime, the Warwickshire engineer has taken part in tens of thousands of competitive miles in LAC 64E. But his bid for glory on the 1982 Himalayan Rally almost ended before it began: the car beached itself coming off the starting ramp and had to be lifted on to terra ferma. With lessons learned, Davis returned a year on for another stab and finished 12th overall.

AutoFact: Davis and his faithful G4 claimed class honours in the 4500-mile ADAC Tour d’Europe in 1988.

A product of Italian fridge magnate Renzo Rivolta, the Isetta had trouble getting out of its own way but, nonetheless, a works team was entered in the 1954 Mille Miglia. As in 1000 miles, in what nominally passed for a car with a 236cc, two-cylinder boat anchor stuffed up its chuff. With a top speed of a heady 45mph, two even made it to the finish. Despite being some 175 places behind the victorious Lancia D24 of Alberto Ascari, the truly heroic Mario Cipolla won an index of performance award for his drive.

Remarkably, the 0.6-litre Trabbie has a competition career dating back to 1961 when French loons Jackie Barthelemy and Xavier Boulanger entered one in the Nürburgring 1000km. More recently, there’s been Michael Kahlfuss’ efforts to celebrate. The former driving instructor entered a Trabant 601E on the ’92 RAC Rally and even finished, albeit in 99th place. He would return three years later and move up to 92nd. The German then succumbed to the temptation of a much more suitable Toyota Celica GT-Four.

The report in Autosport read: ‘Following an inexplicable crash on the two-way section of the Kingston By-Pass near the Hooch underpass, John Cooper was taken to Kingston Hospital with head injuries. He was driving an experimental twin-engined Cooper Mini, which struck the 3ft retaining wall separating the double highway… When he recovered consciousness, he had no recollection of what had happened’. In the same week in May ’63, Downton Engineering entered a similar car on the Targa Florio. Paul Frère and Sir John Whitmore managed to keep it shiny side up to place 27th out of 28 finishers.

AutoFact: This was the sole race outing for the car. Shock.

Though a works SM was campaigned on the 1971 Rallye du Maroc, it was hugely modified. The one braved by sometime Formula 1 driver Howden Ganley on the ’73 Avon Tour of Britain was not. Hoodwinked into competing by Autocar’s sport editor and budding co-driver Ray Hutton, the duo tackled all three days of circuits and special stages in much the same manner: understeer, body roll, understeer some more, commune with nature, head trackside again. And all without lifting. The heroes finishing a commendable 18th overall.

You’re going to compete in a 16,000-mile rally that stretches from London to Mexico with some stages lasting more than 500 miles. You’ll want performance and comfort; something rugged and easy to fix. Yep, there’s only one car for the job – a Rolls-Royce Silver Shadow. The Autobar Vending entry on the 1970 World Cup Rally caused a rumpus, not least for co-driver and preparer Bill Bengry. Sadly, it wasn’t among the 23 cars classified as finishers after endless semi-trailing arm breakages. It made it to Mexico but was excluded after a time infringement.

AutoFact: A Rolls Corniche coupé ran in the 1981 Paris-Dakar, but in reality it was a glassfibre-bodied and had Chevy V8 power and four-wheel drive.

Back track to the halcyon days of NASCAR during the 1950s when the cars really were stock(ish) and just about anything could race. The record books show that Paul Bass accrued $100 for finishing 46th in the 1959 Daytona 500, having started out 40th in the 59-strong field. That he managed this – his sole NASCAR start – in an Edsel is particularly notable. What’s more, Bass did it in a convertible.

Before the last cold war thawed, the arrival of Eastern European cars at international motorsport events was virtually unheard of. For them to head back behind the Iron Curtain with silverware was even more improbable. But that’s precisely what happened when the team of Zeppelin-like beasts – complete with swing axles and air-cooled V8s way out back – took to the Nord and Südschleife during the 1965 Marathon de la Route at the Nürburgring. Remarkably, the Czech saloons droned around with metronomic regularity, with Stanislav Hajdusek and Adolf Vermirovsky finishing ninth overall and victors in the GT class.

AutoFact: Tatra returned for the 1966 running and claimed a 1-2-3 win in the up to 2.5-litre category along with the team prize.

The 1968 London to Sydney Marathon captured the public’s imagination like few other events. Manufacturers rushed to sign up, as did a raft of ‘name’ drivers. Then there was former Olympic-standard bobsleigh ace Keith Schellenberg who, along with Norman Barclay and Patrick Lindsay, fielded a 1930 8-litre Bentley. A fractured oil-pipe halted progress in Turkey but worse was to come on the mountain road to Erzincan; the car slithered down an embankment. Lindsay broke his shoulder and ended up in hospital. Their rally was effectively over in India when they missed a boat to Bombay: they’d stopped to see the Taj Mahal at night.

The ‘Son of Moscow’ 412 was the car that Which? magazine famously labelled ‘unsafe’. Yorkshire’s most talented Swiss racing driver Tony Lanfranchi was made of sterner stuff. Either that or he lacked imagination. The much-missed bar prop cannily cleaned up in Production Saloons in the early ’70s (28 wins from 29 starts in 1972 alone) after regulations called for classes to be based on cost. But then its only rival in the up to £600 class was a Honda N600 – all 599cc of it.