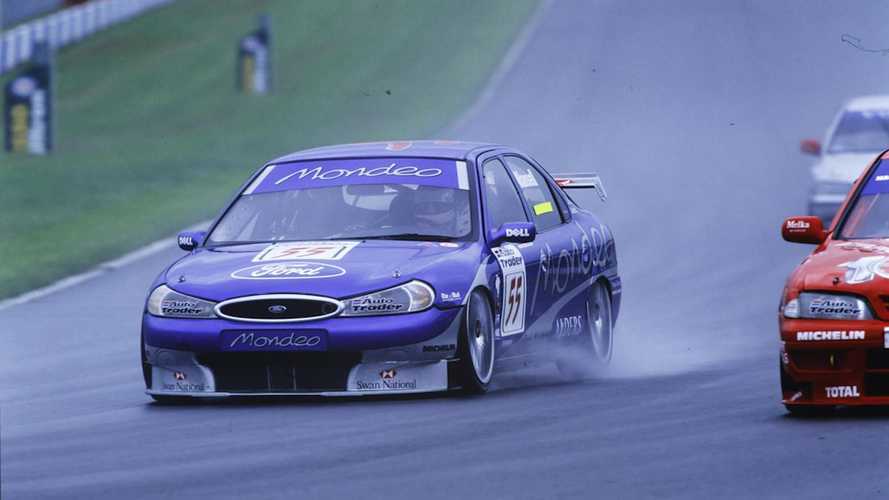 The factory Alfa Romeo team’s arrival in the British Touring Car Championship in 1994 wasn’t without controversy. Formula 1 refugee Gabriele Tarquini dominated the opening rounds, with rivals complaining that the 155’s spoilers weren’t strictly legal. Alfa Corse countered, saying that they were available on the racer’s road-going counterpart as per the regulations. Alfa had cunningly exploited the rules by releasing the limited-edition Silverstone model explicitly with a view to homologating the aerodynamic aids. Despite sitting out one round, Tarquini romped to the drivers’ title with eight wins, while team-mate Giampiero Simoni won the finale at Donington.

AutoFact: Prodrive-run Alfa Romeos failed to win a round in 1995.

Audi Sport owned the 1996 BTCC season, its four-wheel drive A4 being a consistent frontrunner despite being ballasted during the year. Former DTM champion Frank Biela was a class act, taking eight wins from 18 rounds. He took the drivers’ title at a canter, with second place man, Renault star Alain Menu, more than 100 points in arrears. Further weight penalties blunted Audi’s charge a year later, with Menu returning the favour to better five-time race winner Biela by an even greater margin. Obliged to run with front-wheel drive in 1998, there would be no wins and Audi Sport withdrew at the end of the year.

AutoFact: Four-wheel drive was formally banned in the BTCC in 1998.

Vic Lee-fielded BMW won the first two seasons of the Super Touring-era – 1991 and '92 – and the works Schnitzer Motorsport equipe would clean up in ’93. Joachim Winkelhock endeared himself to race fans with his press-on driving style aboard his white and red 318i, winning five of the 14 rounds to seal the drivers’ title. Team-mate Steve Soper was second in the championship, having taken three wins from the first six rounds but none in the latter half of the season. Nevertheless, Winkelhock’s margin of victory was just 13 points.

AutoFact: Just a year later (1994) Winkelhock had dropped to fourth in the points race despite four wins.

It raced for only one season, and failed to win a race, but few touring cars are more fondly recalled than the Tom Walkinshaw Racing Volvo wagons that competed in the 1994 BTCC season. Despite claims that the estate version was chosen because it was more aerodynamic than the saloon variant, it was patently a marketing exercise, and a brilliantly realised one. TWR old boy Jan Lammers and Formula 3 race winner Rickard Rydell failed to crack the top ten in the final championship results, but Volvo would go on to become a force in the series.

AutoFact: 1994 was Lammers’ sole season in the BTCC.

Renault’s bid for BTCC glory began in 1993 with the recalcitrant 19 and drivers Alain Menu and reigning champion Tim Harvey. Both men took a win apiece, but hated the car. The Laguna arrived in 1994 and soon became a frontrunner, with Renault claiming the constructors’ prize in 1995 and ’97. Menu finally claimed driver honours in the latter season, having finished runner-up during the previous three seasons. The Swiss dominated during his championship year, claiming a record 14 wins, with Renault new boy Jason Plato taking two victories.

After several false dawns with the Janspeed squad, Nissan finally came good in the BTCC in 1998-99 under Ray Mallock. The Japanese marque scooped the manufacturers’ title both years, while Anthony Reid finished second in the drivers’ standing in ’98. New signing Laurent Aïello dominated a year later, cruising to the title with ten wins with team-mate David Leslie taking the runner-up spot. What’s more, Nissan also won the Independents’ title with Matt Neal running away with the spoils. The now veteran of BTCC also became the first Independents driver to win outright, claiming honours at Donington.

The Cavalier predated the Super Touring era, having come on-line in 1991. Nevertheless, it continued to win long after it should have been heading for the embalming table. Much of its success was down to the efforts of John Cleland who had previously won the title in 1989 with an Astra. His second BTCC title in 1995 was more impressive. Against a new generation of Super Tourers, Cleland’s ageing Cavalier should have been outclassed. However, in its Ray Mallock-built guise, it was more competitive than ever, and the Scot proved that, given the right equipment, he could beat anybody in a tin-top.

AutoFact: David Leslie was a winner in the 1993 BTCC with an Ecurie Ecosse Cavalier.

The Mondeo was a winner during 1993 when it appeared halfway through the season, but championship honours were a long way off. The Blue Oval finally took the Manufacturers’ prize in 2000, just as the Super Touring era was about to implode. Much of the reason for this was spiralling costs, and that year Ford spent a rumoured £12m in a bid to finally claim the silverware. Factory drivers Alain Menu, Anthony Reid and Rickard Rydell dominated amid a dwindling field, finishing first, second and third in the drivers’ standings. The Mondeo was also driven by 1992 F1 champion Nigel Mansell. In the TOCA Shootout he was crashed into by Tiff Needell, but in his later appearance, at Donington Park in 1998, starting 19th he rose to fifth position. Having briefly led also, it is regarded by many as the finest ever BTCC race.

AutoFact: Each car cost an alleged £3m to run during the 2000 season.

The Accord holds the distinction of winning the final race of the BTCC’s Super Touring era, as Tom Kristensen emerged victorious at Silverstone in September 2000. The series was starting to ebb, with only Honda, Ford and Vauxhall fielding works cars. Kristensen, then with only one Le Mans 24 Hours win to his name, was team-mate to Gabriele Tarquini and James Thompson. Honda bagged seven wins during the season, but lacked consistency. Veteran charger Tarquini was the highest-placed Honda man in the series’ points, placing sixth overall. The Italian took three wins to match Kristensen’s tally, with Thompson triumphing only once.

In this company, the 405 can in no way be described as a classic of its kind. The reason? It never won a round of the BTCC despite having such talented wheelmen at the helm as 1990 champion Robb Gravett and former one-make king, Patrick Watts. The latter, in particular, was spectacular to watch, driving beyond the car’s limitations in a bid to make up the power deficit to his rivals. The odd thing is, Peugeot was a multiple championship winner in the French Supertouring series. As for the reason why the cars never succeeded, the drivers have their opinions but they’re unrepeatable.

AutoFact: Pugs may not have won a round of the BTCC, but Gravett took TOCA Challenge honour in 1992.