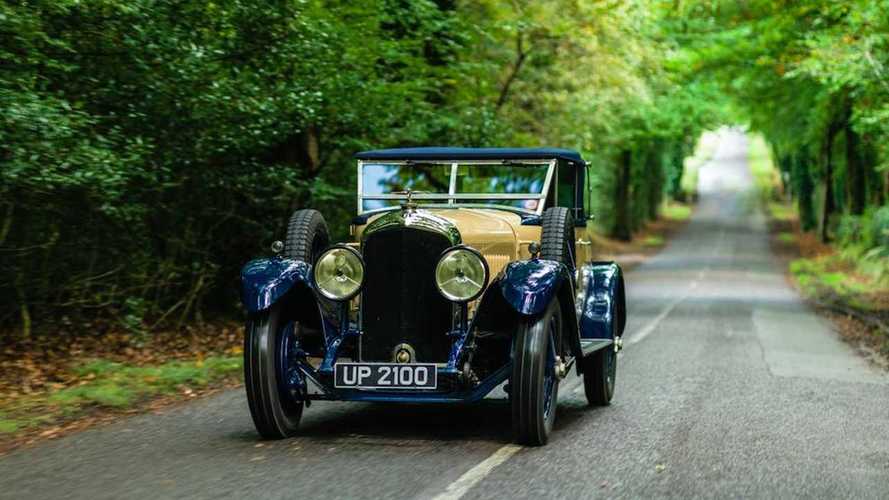 This 1928 4½-litre was found scattered around a London house. William Medcalf Vintage Bentley has kept it fully original, making for a unique experience

While some hi-tech brands may get all the headlines, it takes something far older and, dare we say, more basic than last year’s iPhone or the first-generation PlayStation to make you feel alive. If you are hunting for a prime example of confidence, craftsmanship and passion, then you need to venture into the gentlemanly world of the vintage Bentley.

‘It can become something of an obsession; the desire feeds the flames,' explains William Medcalf. He should know; he's been renovating pre-1932 Bentleys through his business for more than 20 years, although his fascination began long before his first mainstream project in 1994.

‘It’s probably fair to say that it’s because of my father that I’ve been so taken by vintage Bentleys. His idea of a holiday was driving 28,000 miles around America with the family – my two sisters, myself and my mother – in his Bentley. It was a part of the family, that car. We went across to the States for the best part of nine months, covering coastal roads. The car caught everyone’s attention – quite an impression on a five-year-old boy.’

Since then, William Medcalf Vintage Bentley has become a mantra for workmanship and quality, quickly evolving as the leading rally-preparation specialist for those keen to use their WO Bentleys in the environments the cars were designed for, including the Peking to Paris and Flying Scotsman events.

William explains: ‘I’m dedicated to vintage Bentleys from 1922 to 1932 and
nothing else. After this time, the company had been bought by Rolls Royce
and the cars they produced were engineered in a very different way.'

Besides the knowledge, passion and determination to keep the WO-spirit alive, Medcalf also employs a team of expert mechanics and skilled labourers in his West Sussex workshop, to which clients from all over the world bring their cherished pride-and-joy for intricate TLC. However, William and his team are always on the hunt for new projects, and some time ago they found a rather special Bentley not too far from home – although it was in an unexpected location.

Barn finds have always been the holy grail for those of a classic and vintage car persuasion. The concept of prising open a long-forgotten garage door to discover a timewarp vehicle is a romantic notion too tempting to ignore. A genuine ‘house find’ is even rarer. Yet this Bentley – one of only eight 1928 Bentley 4 ½-litres with Victor Broom Drophead Coachwork – was discovered scattered throughout a house in the middle of London, near Kew Gardens.

William recalls: ‘I received a phone call from the daughter of one of my clients, Stuart Wallace. He would pop down to us from time to time for parts, as he was a keen enthusiast. Sadly he passed on, and his daughter invited me to visit his house as he had been storing the dismantled Bentley around him.

‘I walked in to find the cylinder block on the bare floorboards of the entrance hall. The clutch was on the stairs. There were parts everywhere. It took four of us nearly a week to find all the missing bits. There were bespoke parts in drawers and the door cards were upended in the spare room.’

The story behind the find is fascinating. The only known survivor of this car's kind, it had been purchased in 1962 by Stuart, who was on the lookout for something a tad different from the Austin Sevens and Standard Eights used by fellow students of the day. During this time, you could pick up a ‘proper’ Bentley for next to nothing – in Stuart’s case, for only half the price of a Mini. However, crippling fuel costs soon found the Bentley laid up out of financial harm’s way.

Rather than sticking it away in a garage to rot, Staurt took everything apart, photographing and logging each stage and storing several delicate parts in jars of oil. Headlamps were stashed under the bed, with the radiator and unique dashboard squirrelled away in the spare room.

Amazingly, William and his devoted squad found enough components to build a rolling chassis – although there was one thing worrying them. The bodywork was missing.

It wasn’t until Stuart’s daughter informed them of her father’s lock-up that the bodywork was located. Balanced on the roof, open to the elements, was the sole survivor of Broom’s eight Bentley frames. Within the undergrowth was a large metal chest, containing the final pieces of the puzzle.

William says: ‘Stuart had taken the entire car apart – right down to the last details – but never found the chance to put it all back together again. We thought about restoring it, but with all the original parts to hand in such a condition, we decided to keep it as preserved as possible.’

Despite being 87-years-old, the Bentley, amazingly, still had its original lead seals in place, alongside the original wire wheels, suspension, leather gators and even the tyres. Unbelievably, not a single nut or bolt had to be replaced – they were all present. The odometer read-out displayed a lowly 39,000 miles, which, given the documented history, was believed to be accurate.

That was in 2015. Two years on and the house-find Bentley stands before us in Medcalf’s workshop, very much back in one piece. It’s got fresh, period-spec paint, straight panels and that wonderfully original interior.

The body now sports the original colour scheme it had worn prior to being re-painted in Stuart’s ownership, with Saxe Blue wheelarches and flanks together with cream bodywork and Saxe Blue-spoked wheels. Every minute detail has enjoyed proper attention, from the transferable rear light to the footholds over the back wings that allow access into the ‘mother-in-law’ boot seats. Under the seats rests the original tool kit; while the odd tool had to be sourced, 90 per cent of it was complete and therefore as it was when it accompanied the Bentley in 1928.

The engine bay sparkles, with everything in place to create a work of art around this 110bhp-plus powerplant. However, William has kept it strictly ‘as it should be’, rather than pandering to the concours brigade.

William smiles: ‘Judges for concours competitions would baulk at the dull shine from the copper and the steel rocker cover with its scuffing. But that’s how they left the factory. It wasn’t all gleaming; these engines were built by hand, with parts hand-finished to fit.’

Regardless of the debate William’s Bentley has caused about originality against clinical preserve, no one can argue its finest aspect – the way it drives.

Before the mighty beast so much as fires up, you can feel the grunt seeping out of the bonnet vents. It snorts upon engagement of the starter motor before bellowing into life, roaring on the choke with a rebellious exhaust note echoing the grace of bygone exploits.

Pulling away, the Bentley feels refined in a way that would leave contemporary motoring journalists deeming the sophistication rudimentary. Yet what it actually oozes is raw sporting pedigree. It grumbles along the road in a luxurious manner, the gearbox whine and engine revs offering an indefatigable touch of command, as the long bonnet leads you into each bend with enough grace and authority to leave other motorists diving for the nearest hedgerow. Saxe Blue wheelarches slice through the scenery, with the radiator mascot leading the way like some mad, proud military general.

Each gearchange is an art form, with no synchromesh on any ratio, while the brakes require serious planning for the obstacles ahead. Yet once you're accustomed to the controls, and grasp the concept that this fine pre-war vehicle pre-dates legislation allowing women over 21 the right to vote, the sense of occasion is overwhelming.

It handles in a surprisingly nimble fashion for such a leviathan, with sprightly acceleration to match. Normal road speed can be attained long before you start to hold up Lord Audi in his A4 saloon, and the ride comfort knocks that of any modern BMW into a cocked hat.

Up to this point the 4½-litre is remarkably civilised, gliding around like Her Majesty’s butler. Except this manservant knows jujitsu. The noise from beyond the bulkhead intensifies into a rampant growl that propels you into the 1920s, barrelling round Brooklands with Malcolm Campbell for company.

It eggs you on well beyond the constraints of your comfort zone. You push harder, whirring the wheel between your hands as you grab the next gear on a wave of adrenaline. The outside world is now a racetrack, your screaming passenger a fellow gentleman racer. ‘Is that all you’ve got, dear boy?’

As the roads narrow, it seems sensible to slow down. While far from being a road-going GT car, this Bentley is all the better for it. It's dripping with panache. Radiating class and smelling of leather-lined victory, even the shortest of blasts yields enough respect to find yourself saluting the ghosts of those whom designed and built it.

Returning it to the lustrous showroom adjoining William’s workshop feels like travelling through time. Except there is imminent sadness upon leaving the vehicle, for this is as close to driving a factory-fresh WO Bentley as you could ever get. And it’s already sold, to be whisked away out of public view, never again to return under my control.

The William Medcalf Vintage Bentley team’s painstaking efforts to maintain the Bentley’s originality make this pre-war vehicle a genuine one-off, the likes of which is unlikely ever to be replicated again.

I smile and make small chat as the Bentley is swiftly taken away, back into the workshop. It glints in the autumn sunlight, leaves splattered over the tyres, bodywork smeared with condensation.

The cars William and his team restore capture everything a driver could possibly yearn for – and this 4 ½-litre is the pinnacle. Peel away the body and the interior, and you’ll find the beating heart of a pure-bred racer with a backstory most supercars would kill for.

Its shape and sensation leave you intoxicated with gentlemanly tales of fighting, the opposite sex and sheer, outrageous Britishness. This car isn’t fickle, it doesn’t ache for your approval. It wins it without so much as trying, akin to the team behind it.

The Bentley may have spent decades broken up in a London house, but it now laps up the open road with vigour. Here’s hoping the new owner returns it to the tarmac, where it rightfully belongs.