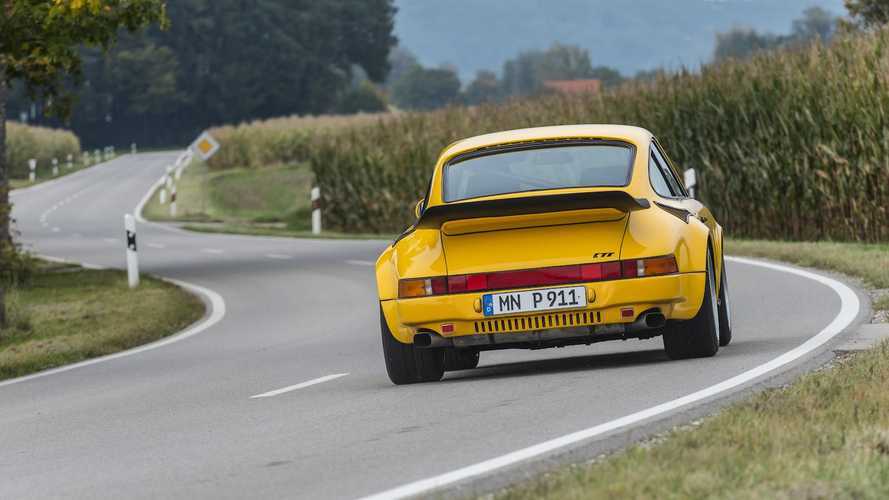 We drive Ruf’s famous 1987 Porsche 911 CTR1 Yellowbird, star of ‘Faszination on the Nürburgring’, still one of the greatest ever automotive movies

Faszination on the Nürburgring. Even the title provides a frisson: we know the awesome challenges of the Nordschleife, either first-hand or courtesy of Top Gear. But Ruf’s 20-minute movie, catchable on YouTube (and below), shows how it should be done. Not only does it consolidate the reputation of the legendary CTR Yellowbird, it makes a star of test driver Stefan Roser too.

There’s a camera behind him on the cage so you see him working, endlessly jiggling the steering wheel and shifting from gear to gear; and there’s another on the passenger door catching the occasional shift and dancing on the pedals. But it’s the mesmerising, relentless pursuit of the sinuous blacktop receding into infinity that holds the viewer wrapt.

In a month that's seen the [restored Yellowbird reappear at The Quail, A Motorsports Gathering], and Ruf models displayed throughout Monterey Car Week, sit back and enjoy the legend.

The film begins innocuously enough: a glimpse of the cars in-build at Pfaffenhausen. And then it takes off: ‘Faszination on the Nürburgring, the world’s fastest car on the most challenging race circuit in the world,’ goes the voiceover.

Unencumbered by crash helmet, gloves or race suit, Stefan Roser flicks the Yellowbird this way and that, rushing contemptuously past slower cars and bikes, diving into dips, edging into turns, correcting, opposite locking, flipping through the gears, third, fourth, fifth, tyres squealing as he apexes, armfuls of lock as the car gets sideways, and then on his second lap it’s interspersed with trackside and aerial sequences of the car in action, smoke pouring off the tyres as Roser goes askew. The film went viral with the arrival of the internet, and it’s obvious why: it has to be the archetypal movie of driving a road car on track.

The Yellowbird name was coined in homage to its body colour by the American magazine Road & Track when it staged a supercar showdown at VW’s Eira Lessien test track, Wolfsburg, in 1987. In the hands of Ruf’s test driver Stefan Roser the Yellowbird maxed out at 214mph (342kph), a speed that none of the assembled muscle cars from Ferrari, Lamborghini, Mercedes AMG nor Porsche could match.

Endowed with nearly twice as many horses as decreed by Zuffenhausen, and mustering 408lb/ft torque from its blown flat-six in the narrow-body, de-guttered shell, it was 13mph quicker in a straight line than the much-vaunted 959.

The Yellowbird thus sealed Ruf’s reputation for creating world-beating sports cars, and as the firm forged ahead with its BTR 3.4 and BTR slant-nose models in 1988, the company was officially certified as a car manufacturer by the US Environmental Protection Agency and the US Department of Transport. Ruf created just 29 CTR1s, and 20 911s were retro-converted to CTR1 spec at the Pfaffenhausen eyrie. When the base 964 was superseded by the 993, Ruf introduced the CTR2, of which 29 cars were built.

Now, during a session on the smooth blacktop that criss-crosses the Bavarian farmland around Ruf’s Pfaffenhausen HQ, we reacquaint ourselves with the Yellowbird CTR1 and one of its 2016 successors, the SCR 4.2. To place a little context on the designations, Ruf’s 911-based models are corralled in initialled groups – SCR, BTR, CR, BR, CTR, RCT, RTR and RGT, comprising two or three evolutions based on the contemporary ‘donor’ 911 model, beginning in 1983, and based on single- or twin-turbo fitment, or increased engine capacity.

Alois Ruf had been creating his own brand of Porsche 911-based cars over a decade before the rambunctious Yellowbird was hatched. His first effort was based on a 911 Carrera 3.0 RS, launched in 1975, with his normally-aspirated 3.2-litre 911 SCR following on a year later, and the turbo 3.3 of 1977 recognised as the first officially designated Ruf model. In 1981 the German TÜV granted Ruf Automobile manufacturer status, and the first car to bear an actual Ruf chassis number was the turbocharged 3.4-litre Ruf BTR, hand-built in 1983.

The CTR1 – standing for ‘Group C Turbo Ruf’ - appeared in 1987. Its Motronic-managed powerplant is the KKK Type K26 twin-turbo 3.4-litre unit, developing 496bhp. Each air-charge intercooler is mounted ahead of the rear wheels. Though the rear wings are wider than standard by an inch either side (2.5cm), the shell is further streamlined by the removal of the roof-flanking rain gutters, which also cuts down wind noise, and wind-cheating plastic bumpers are fitted, prefiguring the 964, instead of the donor 3.2 Carrera’s rubber-gaitered impact bumpers.

The CTR1 front bumper contains an oil cooler, with integral fog lamps and curving indicator housings, while the rear bumper manifests a trio of three cooling slats either side of the number plate. The oil filler cap is on the outside of the right-hand rear wheelarch, à la 1972 2.4-litre 911s, and the rear arches of earlier cars feature arrowhead-shaped ducting to feed the two air-charge intercoolers, though they found that there was sufficient airflow via the engine lid ducting.

An IMSA-style whaletail rear wing projects from the engine lid, and beneath the car, running from side to side midway within the wheelbase, there’s a little rubber aerodynamic strip that comes into play at high speeds. The suspension is 40mm lower than standard, using Bilstein gas dampers and running 2.5° negative camber. Braking is by 330mm discs sourced from the 962 Group C parts-bin. Minimalist rear number plate lights reference the 911R.

Torsional rigidity is improved by seam-welding the inner panel joins within the bodyshell, and the rear cabin roll-over bars stiffen the chassis still further. There’s a special leather-bound, two-spoke, monogrammed Ruf steering-wheel, and the five-speed gearknob is topped with a leather ferrule, stamped with the six-speed logo. Within the instrument binnacle, the dials are Ruf logo’d items, including the 350kph speedo.

If ever a car fitted like a glove it’s the Ruf Yellowbird: the chairs in the CTR1 are figure-hugging Recaros clad with a spongy fabric centre section and leather sides and backs, with provision for a full harness. There’s an ignition cut-off on the dashboard just to the right of the Ruf monogrammed steering wheel, and it has a leather-lined roof and door panels, pre-dating the hallmark Ruf internal rollcage. There’s a boost gauge and a knob to turn up the turbo boost. The rear seats are absent, with rollcage and Simpson harness anchor points instead.

The CTR 1 weighs in at 1150kg (2533lb) and accelerates from 0-200kph (124mph) in 11.4s, covering the standing kilometre in 20.9s. Top speed is 214mph. The Yellowbird was Ruf’s first twin-turbo model, yet the spaciousness of the engine bay comes as a surprise, because you assume that it’s going to be chocker with turbos and intercoolers, but Ruf installed the intercoolers behind the rear wheels and the turbos and pipework underneath to make a very neat situation for the drivetrain.

The front luggage compartment is equally uncluttered, manifesting a brake balance adjuster and custom-made strut-brace between the turrets. Yet for all its rawness, it is practical too: the Yellowbird provides race car performance that can be applied on the road.