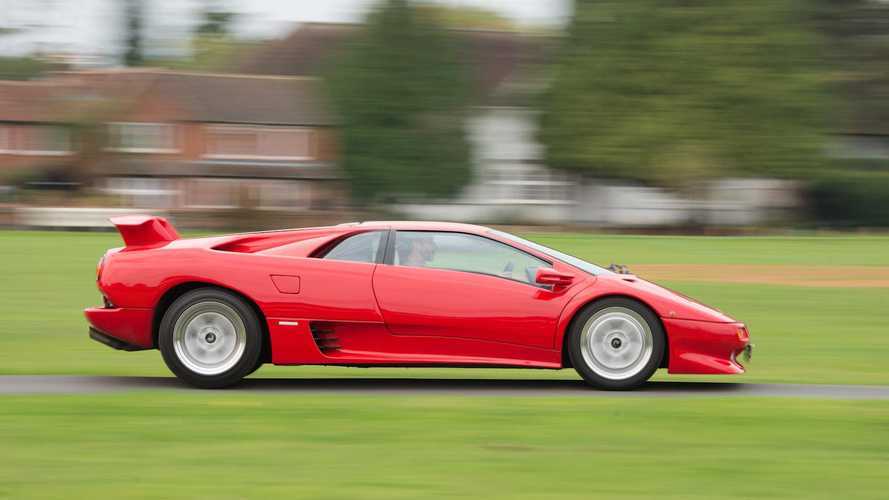 When we arrive, we hear and actually feel the Diablo before we see it. It’s not especially loud, but it rumbles; the deepest rumble I’ve ever heard from a road car at idle. The revs rise and fall as the engine warms, plumes of condensation rising from the twin exhausts.

The nose is short, the tail long, the rear wheels comedically wide. It’s almost a parody of a supercar, so exaggerated is its form.

If you want to know how a Diablo feels, this is the one to try. It’s covered just 8500 miles in its 23-year life, and it’s never been out in the rain. It’s perfect, spotless, not much more than run in. We’re about to take it on the longest drive it’s had for years, so thank goodness the sun is shining and the roads are dry.

You must be wondering why it’s such low mileage. It’s simple really: its owner, a hard-working industrialist with several factories around Europe, treated himself to the Diablo and 11 other iconic machines through sheer enthusiasm, driving them mostly to car shows initially before his work took him to Holland, and the cars were all moved into secure storage.

He later moved to Guernsey – and if you’ve ever been there you’ll know there are few places less suited to a 2m-wide, 2.65m-long supercar than the Channel Islands. Not much use for 204mph and 0-60mph in 4 seconds there either…

Now he’s retired, and has been gradually selling off his cars. This one went through Historics at Brooklands – a one-owner, fully-documented, low-mileage 1994 Diablo VT that’s of course was one of the sale’s star attractions.

That we’re able to drive it is quite a privilege. It’s only recently been recommissioned and put through an MoT (which it passed first time) by long-time classic car specialist John Tomlin, so it’s not taxed (hence the need for trade plates covering up the UK registration) and the most miles it’s done recently have been to the MoT station and back. But these Lamborghinis are surprisingly tough machines, and there’s nothing that will do it more good than a decent blast through the nearby lanes and onto the nearest stretch of relatively quiet dual carriageway.

So, no time like the present to dance with the devil. The scissor door swings up easily and smoothly, opening up a wide aperture into the cream leather interior. There’s still a touch of limbo dance action needed to ease past the door and drop down into the seat but by supercar standards it’s relatively easy.

Pull the fixed-rake seat forwards to get a full movement on the pedals. Ah. Pull it forward some more to be able to reach the steering wheel. Funny how that old cliché of the need for short legs and long arms (the absolute opposite of my build) in Italian cars has held true for so long.

The seat belt pulls in from the centre – the C-pillar is a long way back so it’s a relief that the belt’s not mounted there. The door pulls down as easily as it opened, clicking shut with an unexpectedly light, smooth action. It’s actually less awkward than, say, a modern McLaren’s dihedral doors. And even with the door shut, the cabin still feels light and roomy, helped by the cutaway fascia that swoops away around the driver’s and passenger’s knees. The aircon and stereo controls are a long reach away, and the edge of the roof is uncomfortably close but it’s otherwise ergonomically sound.

John is sat alongside, as keen to sample the Diablo as I am, but clearly to keep an eye on his precious charge as well. Behind us, the engine is whirring and rumbling in an appealing rather than intrusive manner. This couldn’t feel more supercar if it tried.

That goes for the clutch too, which is short and heavy in action, and perfectly complemented by the open gate of the equally short-heavy movement of the gearshift. First is on a dogleg, far left and back, and with the gearbox cold it takes some persuasion. Best to nip into second and then to first if it’s being difficult. Thank goodness, then, for power steering, because without it any manoeuvring would be especially hard work given that my arms are still quite a stretch from the wheel.

We move away gently, accompanied by only a slight rise in the whirring and rumbling from behind. There’s more than enough torque from the 5.7-litre, 492bhp quad-cam V12 to ensure a smooth getaway despite the heavy clutch. You won’t be surprised to hear that there are blind spots but they’re only to the areas just over either shoulder – the short nose, huge windscreen and deep side windows, combined with the decent-sized rear window right behind our heads, make this one of the easiest supercars ever made to see out of.

There’s no natural spring to the gearshift, it needs to be very firmly moved around the gate, though the heavy action lightens as the transmission oil warms and thins. Second is good for pootling through the lanes, into third as the roads widen, and then we come to an open stretch and it would be rude not to press a little harder on the accelerator…

Until this point the Diablo has been weirdly civilised, quiet, and smooth-riding, but we’ve barely exercised the engine above 2000rpm. Now all hell breaks loose! The mechanical whirrings are drowned out by a stereophonic roar – no, a ROAARRRR! – that seems to transmit throughout the structure, most notably through the roof pillar that I’m suddenly conscious of is in very close proximity to my right ear.

And of course we’re suddenly travelling much much faster, though the suspension is absorbing every bump with wonderful suppleness and the steering wheel is doing a decent job of conveying what’s going on.

Wow! I don’t think I’ve ever known a car that goes from quiet to (very) loud so quickly, and so honestly, without the feeling that I’m simply being treated to aural engineering trickery. It seems that the Diablo just can’t hide its monstrous power, is incapable of remaining ever-civilised, and it’s all the better for that.

We turn out onto dual carriageway, accelerate hard once again just to sample the glorious sound effects, then hear them drop away again as we settle down to a high-speed cruise. When the current owner bought this Diablo, he ordered it through the Portman Lamborghini dealership but ended up collecting it from the Sant’Agata factory due to Portman going out of business. That drive back from northern Italy to the UK would have been pure pleasure – a fast cruise in the Diablo is quiet and relaxed but instantly enlivened by a cheeky poke at the accelerator.

Presumably he avoided any narrow lanes though. My goodness, the Diablo is wide! We all know that cars have grown significantly over the last decade but you still breathe in when easing through tight spaces in this one. What makes it more difficult is that the mirrors don’t fold in, though it has to be said they do a great job of showing what’s behind.

And it’s so long too! Though, because most of that is behind the cabin, the Diablo never feels cumbersome. It’s only when you open the engine lid and stare down at the wonderful 48-valve V12, mounted longitudinally in the Diablo don’t forget (the Miura was transverse), that the length of the car makes sense. The rearmost cylinders are still well ahead of the rear axle line, though the weight distribution is still 43:57 front to rear.

That’s with the VT’s four-wheel-drive too. The first Diablos were two-wheel-drive, with a weight distribution of 41:59. To be honest, you could drive this car every day without realising that it’s four-wheel-drive, because the most that it ever transmits to the front wheels is 25%, and that’s when the rears are losing traction. You’ll see from the width of the rear tyres than losing traction in the dry is rather unlikely.

It’s an interesting machine this. It’s so much more civilised and ‘together’ than the Countach, but still with the Lamborghini quirkiness that was engineered and styled out of the later cars, as Audi’s influence became more obvious. Those later cars are better, for sure, but this car has a character that you can’t help but love, and it feels really strong and well-built regardless.

The structure, a mix of steel tubing, alloy and carbonfibre (with alloy and composite outer panels) shows no signs of flex or shake even over the worst British tarmac and, peering around the engine bay and under the car, it’s clear that build quality was in many ways higher than in contemporary Ferraris – just look at the weld quality between the two marques and you’ll understand.

The Diablo feels every inch a real supercar, far more involving and needful of driver input than any modern equivalent, but it’s also just about civilised enough to be easy to live with. The styling, once thought a little bland – especially by original designer Marcello Gandini, who was furious that the Chrysler stylists had softened off his trademark origami look – has matured over the years, and it’s a relief that it’s not covered in aerodynamic add-ons.

Most of all, though, it manages to look, feel and sound utterly outrageous. And that’s exactly how a supercar should be.