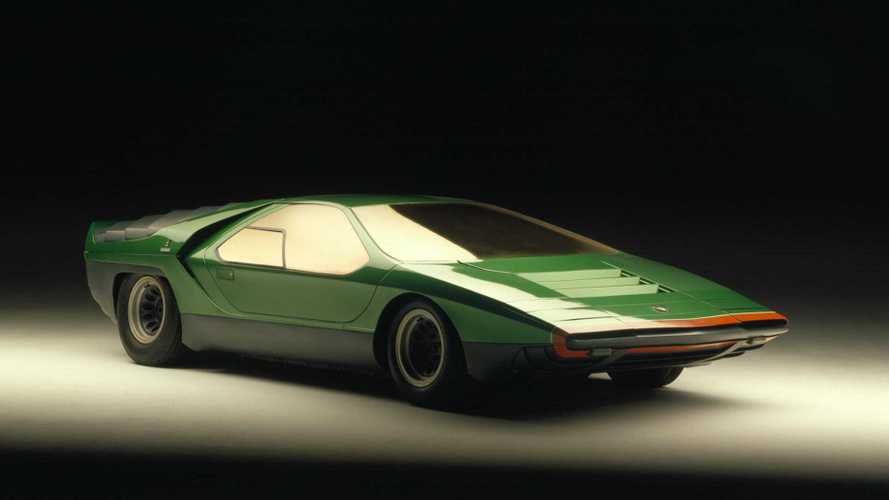 This wild-looking supercar was rooted in a prior Italdesign project, the BMW Nazca C2. Company co-founder Giorgetto Giugiaro had hoped to entice BMW into putting it into production, but it declined. Unbowed, Giugiaro decided that if BMW wasn’t interested, another manufacturer might well be. The result was the Scighera. Based, if only in part on the Nazca, beneath the dramatic skin sat a mid-mounted three-litre Alfa V6 along with two turbochargers. Oh, and an additional supercharger. Transmitting this to the largely Lancia-based four-wheel drive set-up was a six-speed sequential ’box. Top speed was said to be around the 180mph mark. Sadly, Alfa wasn’t interested…

When an artist’s impression of the ‘AZ6 Sperimentale’ project appeared in the motoring weeklies in early 1979, the preliminary sketch promised something that went against the then prevalent ‘folded paper’ wedge ideal. Alfa Romeo was suitably impressed to fund the project through to the prototype and evaluation stage. Fast forward to March 1983 and the Geneva Motor Show, and the GTV6-based prototype was warmly received. Just how close Alfa Romeo came to putting the car into production is open to debate, but, according to Zagato insiders, it was touted at board level as a potential ‘halo’ car. However, the firm’s zero-capital existence ultimately counted against it.

AutoFact: Two prototypes were built plus a further bodyshell.

Echoing styling themes explored on all manner of other Pininfarina creations, this Aldo Brovarone-penned device was unveiled at the 1962 Turin Auto Salon as the Cabriolet Speciale. Based on an Alfa Romeo 2600 Spider platform, there was little mention of ‘Prototipo 621’ in the Turin firm’s press bumf, other than a line about its ‘mother-of-pearl paintwork with synthetic leather trim.’ After further appearances and what passed for an ‘interim’ restyle, the car re-emerged a year on for the ’63 Brussels Motor Show. It appeared suitably different, largely due to the addition of a roof and a change of hue from red to green.

AutoFact: The car was found derelict in a New York scrapyard in 1987.

Bertone’s 1968 show queen hasn’t lost the power to shock. Based on an Alfa Tipo 33 platform, ‘The Beetle’ was once fully functional, too. The brainchild of studio head Nuccio Bertone and stylist Marcello Gandini, the car was created in just ten weeks in time for the ’68 Paris Motor Show. Forecasting aerodynamic principals that were soon to be in vogue in Formula 1, Gandini created a wedge – one with a taut, largely uninterrupted profile and a small frontal area. Bertone icons such as the Lancia Zero Stratos and the Lamborghini Countach were built on the revolution the Carabo ignited.

AutoFact: It was purportedly capable of 175mph, at least according to Bertone.

When, precisely, this project was first mooted remains unclear. As does anything approaching a reliable timeline. This was very much a secret project and little meaningful information exists in Alfa’s own files. Based on 1900 running gear, Bertone’s Franco Scaglione distilled his trio of BAT Alfa streamlining studies into a more workable whole. The results were given a public airing at the ’56 Turin Motor Show where the sister car to the one seen here was in marked contrast to the bizarre 6C 3000CM-based Super Flow 1 on the Pinin Farina stand. Sadly, only two cars were made.

AutoFact: The car’s chassis layout closely aped that of the ‘Disco Volante’ sports-racer.

The Alfa Romeo Giulietta Spider was the brainchild of the marque’s US concessionaire, Max Hoffman. Pinin Farina (then still to words) and Bertone were invited to submit proposals. The latter’s resident genius Franco Scaglione was resolutely uncompromising about compromising, and, accordingly, his ideas were more radical than Pinin Farina’s. Indeed, several design cues from his earlier BAT Alfa show stoppers were transposed intact onto the Spider prototype. But Bertone didn’t land the contract, ostensibly on the grounds that its take on the theme would be too labour intensive to build in volume.

AutoFact: Only two prototypes were made, both of which still exist.

Bertone’s 1983 show car is long forgotten. First seen at the 1983 Geneva Motor Show, and based on the Alfa 6 platform, the Marc Deschamps-penned Delfino wasn’t unattractive but it wasn’t much else either. It fully embraced the ‘origami’ styling fad and wouldn’t have looked out of place on the same stand five years earlier. Oddly, its outline bore more than a passing resemblance to the forthcoming Aston Martin Zagato, not least its unusual side-glazing treatment. While there were rumours of a possible production run, rumours they stayed. The Delfino remained unique with the prototype retained by the Bertone factory collection.

This 1996 show queen was created by the Centro Stile Alfa Romeo design team under Walter de’Silva. Nuvola – literal translation: ‘cloud’ – featured a twin-turbo 2.5-litre V6 mounted in a tubular steel spaceframe chassis. According to Alfa’s own PF blurb, it also packed four-wheel drive and was good for 174mph and 0-60mph in five-seconds. But it was the outer drama that dazzled. This was one of the most beautiful concept cars of its generation and Alfa intended offering the same chassis/platform to outside coachbuilders for further concept cars, but that never happened. The Nuvola remained unique, more’s the pity.

AutoFact: The prototype is enjoying its retirement in Alfa’s own factory collection.

Another masterwork from Giorgetto Giugiaro, this Bertone offering was first seen at the 1964 Paris Motor Show. Based on a TZ1 tubular chassis and equipped with an Autodelta-spec race engine, it was met with much hoopla. Studio head Nuccio Bertone hoped he might be able to tempt Alfa Romeo into backing a small series of replicas. Sadly, tragically even, the suits at Arese weren’t interested. The sole prototype was later involved in an accident during shooting for a Shell promotional film at Monza. It was driven into the back of the Testudo concept car…

AutoFact: The restored car won Best in Show at the Ville d’Este concours in 2005.

Six Alfa Tipo 33s were bodied by outside coachbuilders – Bertone, Pininfarina and Italdesign. The last of which being the ungodly Navajo. Unveiled at the March 1976 Geneva Motor Show, this glassfibre-bodied, Gandini-penned device eschewed Bertone’s time-honoured styling purity and instead opted for a brutally functional wedge that belonged more in a Syd Mead-styled dystopian dreamscape (think Blade Runner). Unusual features included front and rear spoilers that adjusted automatically according to the car’s given speed and concealed headlights that didn’t so much pop up as pop out of the front wings. Nuccio Bertone claimed the car was ‘deliberately extremist’. He wasn’t wrong.