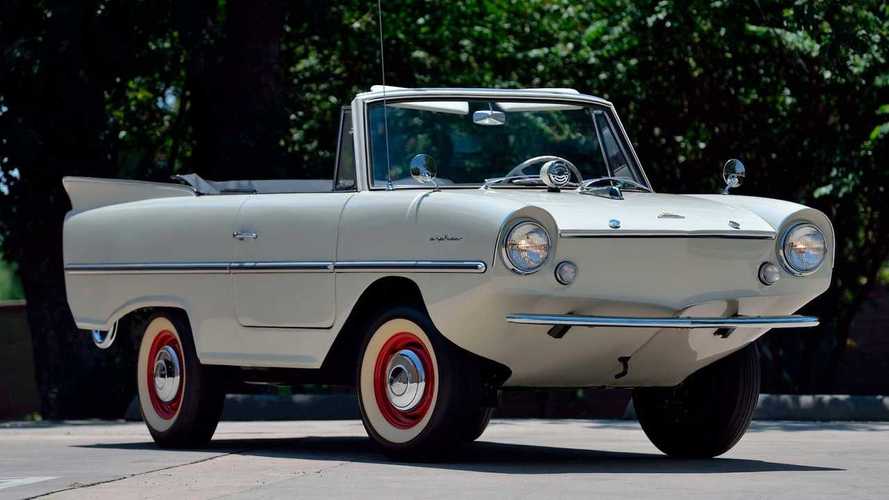 Don't buy a car and a boat because this vehicle does both.

If you're looking to make a big entrance at the local beach next spring, then check out this 1967 Amphicar 770 Convertible that's crossing the auction block at Mecum's sale in Dallas from October 15 to 17. These cars are an interesting footnote in German automotive history for the vehicle's ability to function as a normal road car and then slide into the water as a functional boat.

The Amphicar made its debut in 1961 at the New York Auto Show. The big fins at the rear evoked the look of many American cars at the time. The angled front makes getting into the water easier without scraping the bodywork. At the back, the two propellers give away that this isn't a normal car.

While the amphibious ability is cool, Amphicar is not a fast on land or in the water. Power comes from a Triumph-sourced 1,147cc four-cylinder engine making 38 horsepower (28 kilowatts). Original documentation indicates the vehicle is able to reach a top speed of 75 miles per hour on land and 7.5 mph (12.1 kph) in the water.

Switching from driving on land to the water just requires putting in the bilge plug and operating the locks to seal the doors. Then pull a leather to switch between operating on land and in the water. On the road, there's a four-speed manual gearbox, and there are simply forward and reverse modes as a boat.

This Isuzu Vehicross Is Your $13k Ticket To Early 2000s Quirkiness

Mecum's listing doesn't offer many details about this specific vehicle. While you might expect the Amphicar's body to be fiberglass, it's actually steel. This one is apparently rust-free. The auction page also mentions it undergoing a "comprehensive restoration." The company doesn't offer an estimate for how much the Amphicar might sell for.