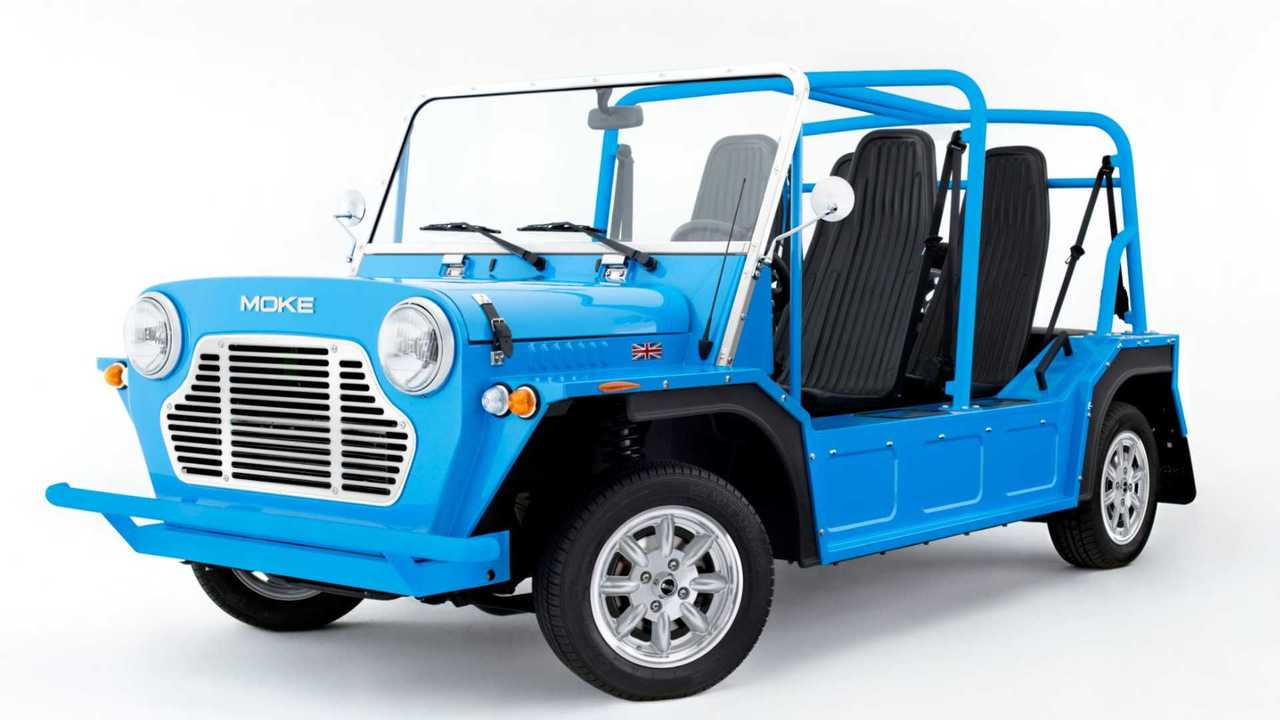 UK customers can choose the standard car or the "56" limited edition.

The Moke name is set to return to the UK, 56 years after the original Mini Moke first went on sale. Priced from around £20,000 (nearly $26,000) plus VAT, the car has been reborn for the modern age, gaining a new engine, new suspension, and modern brakes.

Since the demise of the Austin Mini Moke, which rose to fame on tropical islands the world over, the Moke name has fallen into the hands of British firm Moke International. The company has revitalized the car, selling it as a retro-styled runabout for customers in the Caribbean.

Now, the car is coming back to the UK, with order books opening this week. The new car is larger than its predecessor, allowing more space for passengers and luggage, but the basic design remains the same.

That means the car is loosely based on the original Mini, but Moke International has added a new four-cylinder gasoline engine with 67 hp and 93 Nm (69 lb-ft), uprated suspension, and up-to-date braking systems. Customers even get the choice of manual or automatic gearboxes, while power steering and a heated windscreen are both included.

Would You Restore This Retro Mini Mayfair Convertible?

In celebration of the 56 years since the Moke first took to British roads, Moke International is offering customers the chance to buy a limited-edition Moke 56 model, which is unique for the United Kingdom. Just 56 examples will be built, with each boasting a chrome front grille and windscreen rails, as well as a discreet Union Flag badge on the front wings and a numbered plaque on the hood.

Available in a choice of 14 different colors, the Moke 56 will be offered alongside "standard" Mokes, which come with a folding hood and waterproof PVC seats. The cars also feature rear mud flaps and a radio with a USB port.

"Moke is an iconic British brand that has always evoked feelings of fun and freedom," said Isobel Dando, the MD of Jaguar Land Rover’s Pivotal subscription service and CEO of Moke International."The Beatles, The Beach Boys, and Brigitte Bardot have all been captivated by the personality and unique styling of these iconic cars. We’re excited to relaunch the brand into a new era and introduce Moke to the next generation.”

Moke International says £20,000 is an "indicative" price, and does not include any local taxes. However, the company says the car is proving popular among resorts and private buyers in English coastal hotspots, with order books filling fast. Prospective buyers can register their interest in the vehicle through Moke International’s website.

“MOKE is an iconic British brand that has always evoked feelings of fun and freedom. The Beatles, The Beach Boys and Brigitte Bardot have all been captivated by the personality and unique styling of these iconic cars. We’re excited to relaunch the brand into a new era and introduce MOKE to the next generation.”

From today, UK customers will be able to order one of 56 limited edition MOKEs, an allocation selected to signify the number of years since the Mini MOKE first appeared in Britain in 1964. Order books also open for MOKEs in standard configuration, confirming the permanent return of the brand.

MOKE International revives a quintessentially British design that has charmed for more than half a century. Brigitte Bardot epitomised Riviera chic in her MOKE. The brand has since been enjoyed and championed by fun-seekers including Kate Moss and DJ Khalid. To date the car has also appeared in four James Bond films.

The original MOKE was designed in the 1960s by Sir Alec Issigonis, the architect of the Austin Mini. It was first specified as a military vehicle engineered to be robust enough for deployment behind enemy lines by aeroplane. The original shared components including suspension and chassis with the Mini.

The MOKE soon became one of the best-loved symbols of the 1960s. Becoming the mode of travel for the inhabitants of the most exclusive coastal resorts in Europe, the Caribbean, US and Asia. To this day it remains the beachhouse-to-waterfront shuttle of choice.

MOKE will mark its homecoming with a strictly limited run of 56 cars, built for sale exclusively in the United Kingdom. Each is available in a choice of 14 colours and the Limited Edition ‘MOKE 56’ comes with the front grille and windscreen rails in chrome, a discrete union jack badge on the front wings, and a numbered plaque on the bonnet.

The original MOKE trademark was acquired in 2015 and is now owned by MOKE International Limited. The initial focus has been on meeting demand in the Caribbean market where MOKE is popular with both private buyers and luxury resorts and hotels. Following UK regulatory approval, MOKEs are now available to purchase across the United Kingdom and Ireland. Additional models will be launched across Europe, the USA and beyond in 2021.

In reviving the brand, MOKE International has gathered a team from some of the most celebrated names in the industry. Isobel Dando, leads the board of management with an automotive career that spans two decades. This includes senior commercial and product leadership roles at Jaguar Land Rover and the BMW Group.

MOKE International will stay true to its British and Continental roots through its strategic approach to manufacturing and engineering. All MOKE bodies will be engineered and sub-assembled in the centre of Britain's globally renowned specialist automotive manufacturing industry in the Midlands before being shipped to Cerizay, France for final assembly.

“My role at MOKE is to preserve the integrity and spirit of the original MOKE whilst incorporating the very best of today’s technologies that match the requirements of a new generation.”

Today’s MOKEs remain true to the look and feel of the original, with a particular focus on maintaining the sense of fun and freedom that has endeared the car to so many for more than five decades. Updates include a new 4 cylinder, fuel injection engine, uprated suspension, braking and the option for either automatic transmission or manual for the more engaged driver.

The vehicle is also slightly larger to provide more cabin space. Features previously viewed as a luxury like power steering and heated windscreen now, of course, come as standard.

From today, UK buyers will be invited to order either the limited edition ’MOKE 56’ or the standard MOKE Classic, which begins full production. Indicative pricing starts at £20,000 excluding local taxes and delivery.