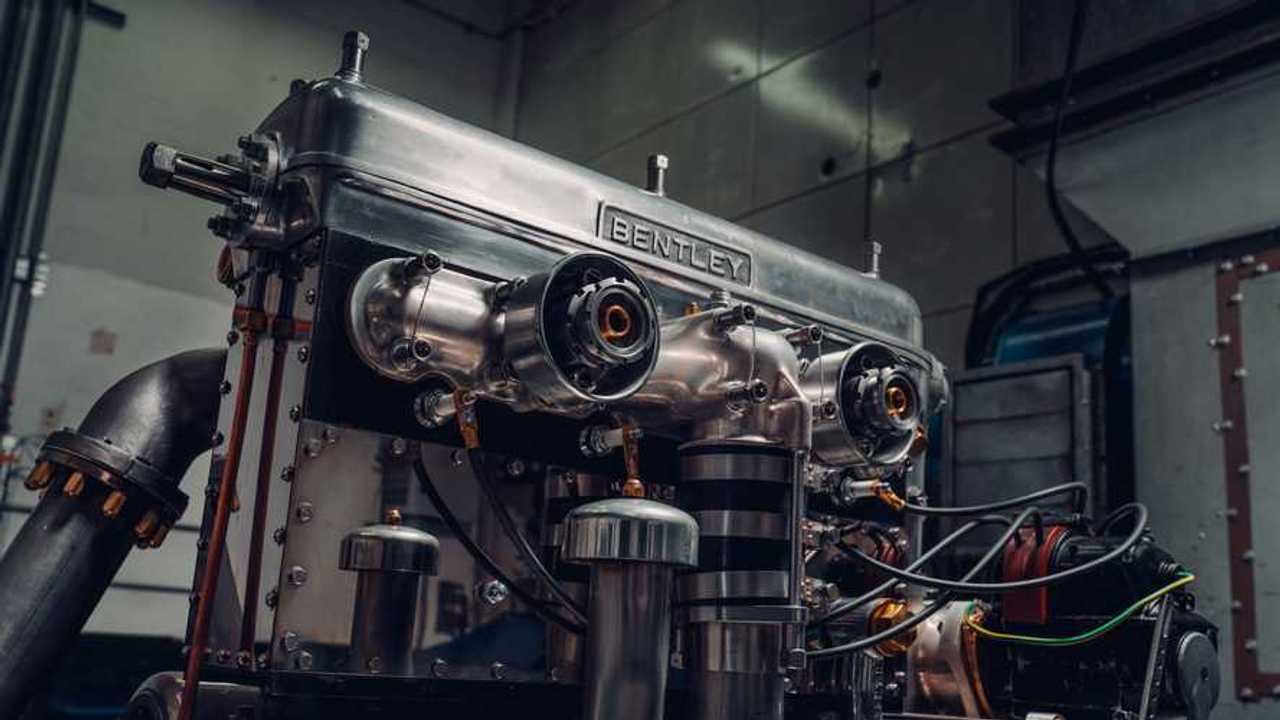 The iconic recreations move a step closer to reality.

The Bentley Mulliner Blower Continuation Series has moved a step closer to becoming a reality after the first completed engine for the project was fired up for the first time on a dedicated and specially-prepared test bed at Bentley’s Crewe factory.

Only 12 newly-built Blower Continuation Series recreations will be made, based on the famed racers of the 1920s. Each has already been sold ahead of completion to customers all over the world.

The first completed engine will go into "car zero," the engineering prototype for the project. While the engine was being built, Bentely engineers began preparing one of the factory's pre-war engine test beds. The test beds have been around since the Crewe plant was built 1938, and were originally used to benchmark Spitfire and Hurricane fighter plane engines.

To prepare the test beds, a replica Blower front chassis was added to cradle the engine, which was then mounted to the computer-controlled engine dyno.

See Other Bentley Models Of The Past:

The completed engines are exact recreations of the engines that powered Tim Birkin’s four Team Blowers that raced in the late 1920s. They even use a magnesium crankcase like the original.

It originally began life as a naturally aspirated 4½-liter engine, making use of all of the latest engine technology of the period, including a single overhead camshaft, twin-spark ignition, four valves per cylinder, and aluminum pistons.

BENTLEY’S NEW BLOWER ENGINES COME TO LIFE IN CREWE
First of the newly created engines for the Bentley Blower Continuation Series fires into action on Bentley’s testbeds
Newly-built engines exact recreations of the original 1928 supercharged 4½-litre design
First engine run on dedicated, specially prepared testbed at Crewe – originally used to run-in Merlin aircraft engines
Bentley engineers fine tuning the engine ahead of power runs
(Crewe, 8 September 2020) The engine for the first car in Bentley Mulliner’s Blower Continuation Series has been fired up for the first time on a dedicated and specially-prepared testbed at Bentley’s Crewe factory.

The Blower Continuation Series is a run of 12 newly-built recreations of one of the most famous Bentleys of all time – the supercharged 4½-Litre ‘Blower’ created for racing by Sir Tim Birkin in the late 1920s. Forming the world’s first pre-war continuation series, these 12 cars have all been pre-sold to Bentley collectors and enthusiasts around the world.

With the engineering prototype for the project – Car Zero – now in build, the first engine has been recreated by Bentley Mulliner with the expert support of specialists. While the engine was being built, a team of Bentley engineers began work to prepare one of the four engine development testbeds at Bentley’s Crewe headquarters to receive the engine. The engine test facility has been at Bentley since the factory was built in 1938, and the cells were originally used to run-in and power-test Merlin V12 aero engines produced by the factory for the Spitfire and Hurricane fighters of the Second World War.

Preparing the test bed involved making a replica Blower front chassis to hold the engine, which could then be mounted to the computer-controlled engine dynamometer. A new software version to measure and control the engine was written and tested, allowing Bentley’s engineers to monitor and run the engine to precise parameters. As the Blower powertrain is considerably different in size and shape to Bentley’s modern production engines, a number of the original Merlin testbed fixtures – still in storage at Bentley - have been utilised to adapt the testbed to accommodate these special engines.

With the engine fully installed, first fire-up took place two weeks ago, and the first engine is now proceeding through its defined schedule of run-in before a full power test. The engines will be tested across a 20-hour cycle, gradually increasing both engine speed and load conditions from idle up to 3,500 rpm. Once each engine is fully run-in, a full-load power curve will be measured.

Once testbed running is complete, the next step for Car Zero’s engine will be real world durability. When the build of the car is complete it will start a programme of track testing – running for sessions of gradually increasing duration and speed, checking functionality and robustness under ever harder conditions. The test programme is designed to achieve the equivalent of 35,000 kilometres of real-world driving across 8,000 kilometres of track driving, and simulates the undertaking of famous rallies such as Peking to Paris and Mille Miglia.

The newly created Blower engines are exact recreations of the engines that powered Tim Birkin’s four Team Blowers that raced in the late 1920s – including the use of magnesium for the crankcase.

The Blower engine started life as the naturally aspirated 4½-litre engine, designed by WO Bentley himself. Like Bentley’s 3-litre before it, the 4½-litre brought together the latest individual engine technologies of the time – a single overhead camshaft, twin-spark ignition, four valves per cylinder and, of course, Bentley’s now legendary aluminium pistons. The racing version of WO’s 4½-litre engine developed approximately 130 bhp, but Bentley Boy Sir Tim Birkin wanted more. WO’s focus was always on reliability and refinement ahead of absolute power, so his solution to finding more power was always to increase engine capacity. Birkin had a different plan – he wanted to supercharge the 4½, an idea that WO thought ‘corrupted’ his design.

With funding from his wealthy financier Dorothy Paget, and the technical skills of Clive Gallop, Birkin commissioned supercharger specialist Amherst Villiers to create a supercharger for the 4½. The Roots-type supercharger – colloquially known as a blower – was fitted ahead of the engine and radiator and driven directly from the crankshaft. Internal modifications to the engine included a new, stronger crankshaft, reinforced connecting rods, and a modified oil system.

In racing tune, Birkin’s new supercharged 4½-litre engine was mighty – outputting around 240 bhp. The ‘Blower Bentleys’ were therefore extremely fast – but as WO predicted, also somewhat fragile. The Blowers played their part in Bentley history, including helping to secure victory for a naturally-aspirated Bentley Speed Six at Le Mans in 1930, but over the 12 races that the Blowers contested, a victory was never secured.