Unique Bugatti Among Rarities At This Week's Concours Of Elegance 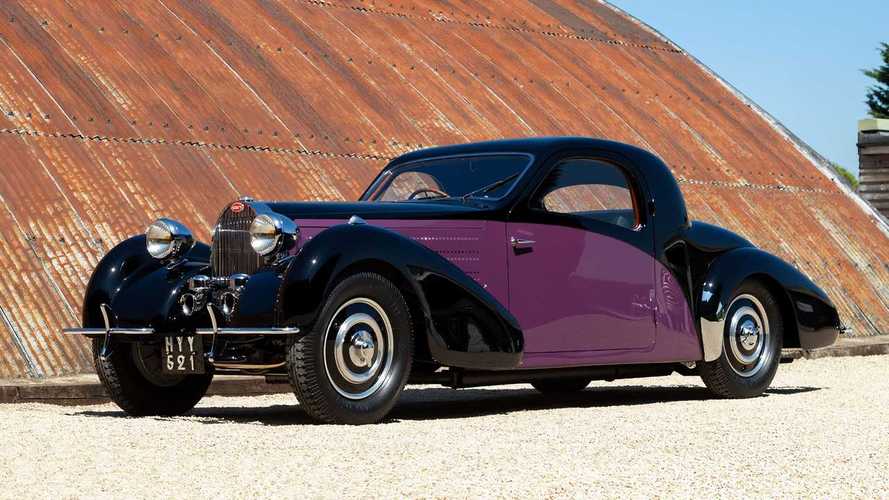 Coachbuilt wonders will look back to a bygone era.

This year's Concours of Elegance at Hampton Court Palace on September 4-6 will celebrate a bygone era of unique coach-built cars by gathering a trio of one-off masterpieces.

Once upon a time, the well-heeled would buy a car as a rolling chassis, and then take it to a specialist coachbuilder to finish the job off. It was like the customization departments we see at high-end manufacturers today, only on a much more personal level.

Heading the display will be the Bugatti Type 57 Atalante Gangloff. The Type 57 was first unveiled in 1937 and was the first car built under the watchful eye of Jean Bugatti, the eldest son of the company's legendary founder Ettorre.

Powered by a 3.3-liter straight-eight producing 140 horsepower, like Bugattis of today the Type 57 easily out-did its rivals in the power department.

The car survived the Second World War and was put to use as transport for the French Embassy in London and has since passed through a number of owners.

From The Same Event:

Joining the Bugatti will be a Jaguar XK150 S Bertone, one of just three XK150 that were sent to renowned Italian styling house Bertone to bodied as prototype fixed-head coupes.

While three cars got the coupe treatment, each car got slightly different styling by Franco Scaglione. The car heading to the Concours of Elegance is chassis number two and was made on August 15, 1957. It hasn't been seen for decades and is thought to be the only one of the three that remains today.

The final car in the trio is a Bentley 4.5-Litre Drophead sports coupe known as "Mr. Fred." Mr. Fred, one of just two cars of its kind that still exists today, is a product of Newport Pagnell coachworks Salmons & Sons – which later became the home of Aston Martin. Before turning its attention to cars, the company made high-quality horse-drawn coaches and dog carts.

The aluminum-bodied Bentley is a fine example of Salmons & Sons' unique craftsmanship, as is its wonderful mother of the pearl instrument panel.

All three will be in the Main Concours display alongside a selection of "'future classics," Formula 1 cars, and a new "Junior Concours" which will feature half-scale pedal, petrol, and electric cars.

Gallery: Unique Bugatti among rarities at this week's Concours of Elegance

Concours of Elegance 2020 will display the finest coachbuilt automotive masterpieces of all time
Unique Bugatti Type 57 Atalante by Gangloff is joined by the only Jaguar XK150 by Bertone thought to remain on the road
Hosted at Hampton Court Palace from 4-6 Sept 2020, the event is the first major global concours d’elegance event since March
Entry to the socially-distanced event will be strictly limited with tickets only available to purchase in advance
The Concours of Elegance, presented by A. Lange & Söhne, will showcase the most astonishing coachbuilt automotive masterpieces in history, including a unique Bugatti Type 57 with coachwork by Gangloff. The one-off or ultra-rare motorcars are joined by Formula One racers throughout the ages, modern day hypercars, Le Mans 24 Hours winners and more at the UK’s finest concours d’elegance, hosted from 4-6 September at Hampton Court Palace.

Harking back to a time when the world’s most advanced and luxurious cars were delivered only as a rolling chassis to be bodied at a coachworks of your choice, the Concours of Elegance will celebrate this era’s most beautiful creations. Below are just a few examples:

Bugatti Type 57 Atalante Gangloff
Many consider the Type 57 to be the pinnacle of Bugatti’s touring models. Revealed in 1934, it was the first car built under the direction of Jean Bugatti. He was also instrumental in the design of the new Type 57 engine, a 3.3-litre straight-eight producing 140bhp at a time when the equivalent Bentley figure was a ‘paltry’ 115bhp. The biggest selling point over and above the mechanical design, however, was the stunning body styling drawn up by Jean and in-house carpenter-wheelwright, Joseph Walter. The Ventoux two-door, Galibier four-door and Atalante Coupé were later joined by the Aravis Coupé and the open Stelvio, from renowned local coachbuilder Gangloff. This Type 57 Atalante, 57633, was ordered in February 1938 by wealthy French industrialist Fernand Crouzet. He asked Gangloff to create a one-off, and its unique features included long rear wings, a bootlid-mounted spare-wheel mount, single back window, special bumpers and disc wheels. The car survived World War Two unscathed via several changes of owner, and post-war it was refurbished and put to use as transport for the French Embassy in London.

Jaguar XK150 S Bertone
The Jaguar XK150 featured styling reminiscent of its XK120 and 140 predecessors, while featuring a far more contemporary late-1950s design. It originally came as a fixed-head coupé, a drophead coupé and a roadster, but in a few rare cases it got bespoke coachwork from famous design houses. This Jaguar, S 834365, is just one of three XK150s that were sent as bare chassis to Bertone in Turin, to be bodied as prototype fixed-head coupés. Each had slightly different styling by Franco Scaglione, who was responsible for arguably some of the most striking cars of the 20th century, from the Alfa Romeo B.A.T. cars to the Lamborghini 350GTV prototype and the Alfa Romeo Tipo 33 Stradale. The Bertones were reportedly built as prototypes for a possible XK150 replacement – a couple of years before the E-type would fill that space. Interestingly, the cars all had a delicate ‘XKE’ badge on their rear flanks. This XK150 Bertone is car no. 2, and its chassis was made on August 15, 1957 and dispatched to Italy the following month. It’s the only example known to still exist, with the other two cars having apparently been unseen for decades.

Bentley 4.5-Litre
Meet ‘Mr. Fred’, one of only two Bentley 4.5-Litre Drophead sports coupés still in existence with bodywork by Salmons & Sons, the legendary Newport Pagnell coachworks that was to become the home of Aston Martin. What’s more, this beautiful 1928 aluminium-bodied automobile was the personal car of company owner Mr Fred Salmons – giving rise to its affectionate name. Founded in Buckinghamshire in 1830 by Joseph Salmons, the coachworks progressed from creating high-quality horse-drawn coaches and dog carts to bodying some of the earliest and finest cars for all makes of automobile chassis from 1898 onward. Its bespoke workmanship was much coveted. This 4.5-Litre’s front wings are a wonderful example of the type of elegance and form in aluminium for which Salmons was known, while its distinctive mother of pearl instrument panel is a thing of delicate beauty.

These cars will join others in the Main Concours display, curated as a line-up of the rarest and most spectacular cars ever built. Joining them are a selection of ‘Future Classics’, iconic Formula One cars and an all-new Junior Concours, showcasing the best of half-scale pedal, electric and petrol-powered classic cars.

New for Concours of Elegance 2020 is the addition of the auction of the year, courtesy of Gooding & Company. The Gooding & Co team will be showcasing 15 vehicles, expected to fetch around £50m altogether, crowned by the most important competition Bugatti in history, a Type 59 Sports.

The UK’s finest automotive manufacturers and specialists will also be displaying their vehicles, including a line-up of rare Porsche 356s from Export 56 and showcases from Joe Macari and Fiskens. Lotus, Jaguar Classic, Aston Martin and Brabham Automotive will each be showcasing their latest models.

Away from the automotive displays, Concours of Elegance visitors can enjoy picnics courtesy of Fortnum & Mason, champagne from Charles Heidsieck and luxury shopping from the likes of Niccolò P. and its bespoke polo shirts.

The Concours of Elegance 2020 takes place 4-6 September. With audience welfare in mind, the organisers have created a new operational plan including revised hospitality and restricted audience capacity, with the introduction of separate morning and afternoon tickets. Guest numbers will also be strictly limited to comply with social distancing guidance.