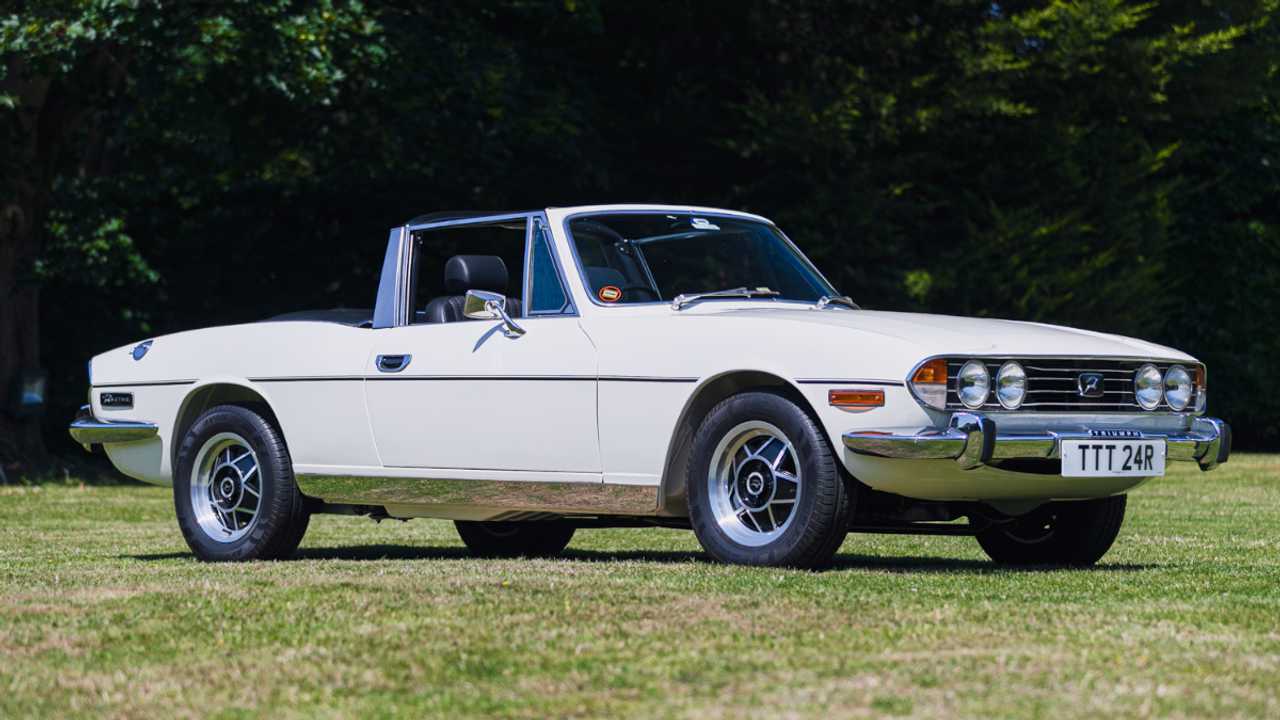 Anthony Hamilton is quite the collector.

The collection is dominated by Triumph sports cars, with no fewer than six being offered in the sale, including a TR5 and also an extremely rare Triumph Italia. As well as the Triumphs, there are other British classics like an impeccable, MGA Twin Cam, two Swallow Dorettis, a 1932 Wolesley Hornet March-bodied Special, and a couple of Minis.

There are more modern cars in the sale too, including a 2006 Ford GT, and a 2006 Mercedes-Benz SLR McLaren Coupe – a car synonymous with the Hamilton name given Lewis Hamilton's F1-beginnings at the Woking-based McLaren-Mercedes team.

You Can Own David Beckham's Rare Aston Martin AMV8 Volante

"We are very honored to be representing Anthony Hamilton and offering 18 cars from his personal collection at our forthcoming auction at the end of the month," said Nick Whale, Silverstone Auctions managing director.

"This is an incredible selection of cars, the selection of British cars is quite extraordinary as to the level at which they are presented."

A full list of the Anthony Hamilton cars that will be sold is as follows:

A superbly presented Mercedes-Benz SLR McLaren Coupe with 11,000 miles
Seriously cool, Concours level 1957 Chevrolet Corvette C1
A totally restored Concours winning Autoglym Gold Champion Triumph TR3A
Possibly one of the best examples of a Triumph Stag MKII with manual/overdrive
The synergy between the Hamilton family and Silverstone Circuit is well known and Silverstone Auctions are pleased to represent Anthony Hamilton at the Silverstone Classic Live Online Auction with the sale of 18 cars directly from his personal collection.

Being a Triumph enthusiast, it is not surprising that there are six being offered, all of which are in the most incredible condition. There are several of the best Concours winning cars, including a TR5 and also a very rare Triumph Italia.

There are many other British classics, including what could be the best MGA Twin Cam in the UK if not the world, two Swallow Dorettis, which not only look similar to the Healey but also use Triumph engine and running gear.

A full list of all the cars offered can be found at the end.

One of the stars of this collection must be the 2006 Mercedes-Benz SLR McLaren Coupe. We all know the strong connection between the names Hamilton, McLaren and Mercedes, so it is not surprising that one of these incredible performance cars features in his collection.

Finished in Designo Black Metallic with a red-stitched black Alcantara interior, this left-hand-drive sports GT was the collaboration between McLaren and Mercedes between 2003 and 2010 to produce an exclusive Gran Tourer. This was to be a homage to the legendary 300SLR of 1955 and during the six years of production, just over 2,000 were produced.

The next car we have chosen is the 1957 Chevrolet Corvette C1, nicknamed, Fuelie, as this was the first time Chevrolet used fuel injection in this road car. Among the enthusiasts, this was the most desirable model to have.

Estimated at £75,000 to £90,000 this is one seriously cool Corvette. In 1996 it underwent a full restoration by world-renown experts in Idaho, making this one of the most exacting and most expensive Corvette restorations ever undertaken. The car is still at Concours level, the attention to detail is quite extraordinary with year correct components in accordance with the factory throughout, even the unique distributor and coil.

A simply stunning car in Onyx Black and a bright red interior, this is possibly the best and most exacting Corvette Silverstone Auctions have seen.

As we mentioned earlier Anthony Hamilton is a Triumph enthusiast and the cars he has added to his collection can only be described as the best. Here are a couple which we have highlighted.

The 1960 Triumph TR3A is an ex-California car which has undergone an extremely detailed restoration and has been converted to right-hand drive. Such is the level of the restoration the car was awarded the Autoglym Gold Champion award.

It arrived in the UK in 1988 and entrusted to Northern TR, who created this remarkable car, presented in Dark Racing Green with a lovely contrasting BRG piped Stone leather interior. The engine bay detailing is so immaculate it could almost be showroom fresh.

Estimated at £35,000 to £40,000 this TR3A is the best Silverstone Auctions has seen and possibly one of the best in the world, no surprise it featured in Bill Piggott’s book The Original TR2, 3 & 3A.

The Triumph Stag was developed from the Triumph 2000 and styled by the Italian maestro Giovanni Michelotti and as such when it arrived on the scene in 1970 it was well received. This 1977 MKII was restored about 5 years ago and still looks very impressive and is quite possibly one of the best examples available.

The history file is quite comprehensive with a full photographic record of the 2015 restoration along with a pristine copy of the original sale brochure. Estimated at £25,000 to £30,000, with the mileage at 57,283, this is a well-restored and stunning example with the very desirable manual/overdrive transmission.

Nick Whale, Silverstone Auctions Managing Director commented: “We are very honoured to be representing Anthony Hamilton and offering 18 cars from his personal collection at our forthcoming auction at the end of the month.”

“This is an incredible selection of cars, the selection of British cars is quite extraordinary as to the level at which they are presented.”

Silverstone Auctions welcome enquiries from seriously interested parties and are happy to arrange appointments to view. They can be contacted on 01926 691141 or email enquiries@silverstoneauctions.com and would be happy to talk with you about The Anthony Hamilton Collection or other cars offered in their sale.