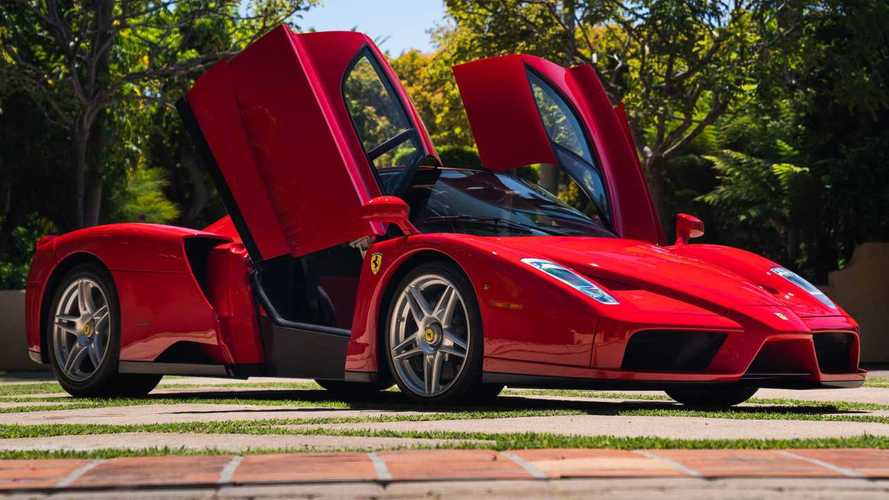 It’s always a special occasion when a rare Ferrari shows up for sale, especially if it’s a former flagship model. The LaFerrari’s precursor was built in 399 examples, plus the 400th car gifted to His Holiness Pope John Paul II by Ferrari. RM Sotheby’s sold the final Enzo back in 2015 for $6.05 million, and now the same auction house has set a new record for the most expensive car sold at an online-only auction with another Enzo.

Chassis number 13303 managed to fetch a whopping $2.64 million during the Driving Into Summer auction and is now only at its third owner. The V12 supercar from Maranello has merely 1,250 original miles on the clock and is one of the very few Enzos ordered with the two-tone racing seats.

Named After The Man Himself:

If you’re wondering how much value the car has gained in 17 years, the answer would be a lot. Considering it had a sticker price of $652,830, it means the car is now roughly four times more expensive than when it was new in 2003.

Even by today’s standards, the Ferrari Enzo remains a force to be reckoned with. Packing 651 horsepower and 485 pound-feet (657 newton-meters) of torque from its naturally aspirated 6.0-liter engine, the supercar sprints to 60 mph in 3.3 seconds and maxes out at 218 mph (350 km/h). The styling has aged like a fine wine and this particular example is in great condition, save for a few minor body defects and minimal wear and tear inside.

RM Sotheby’s sold another former Ferrari flagship during its online-exclusive Driving Into Summer event. We’re talking about a 1985 288 GTO equipped from the factory with power windows and air-conditioning, which grabbed a cool $2.31M.

RM Sotheby’s hosted its first car auction specifically curated for the Online Only platform—Driving into Summer—with great success this past week, presenting 193 motor cars and 24 lots of memorabilia, which opened for bidding on 21 May and closed in a staggered format on 28-29 May. The time-based, online auction totaled an impressive $16,385,738 in sales. More than 550 bidders participated from no less than 35 countries, with 24 percent bidding with RM Sotheby’s for the first time.

Proving that rare, iconic supercars remain in strong demand among enthusiasts, it was a 2003 Ferrari Enzo that led the online auction sales, selling for $2,640,000 to become the most valuable car sold in a dedicated online only collector car auction to date. An exceptional, as-new example of Maranello’s defining millennial hypercar, chassis no. 133033 was offered at auction from just two California-based owners, having resided within its first owner’s collection until 2018. Regularly serviced and used sparingly, 133033 goes to its next caretaker in outstanding condition, showing just 1,250 original miles and optioned with the very rare two-tone racing seats with red 3D cloth inserts.

Following close behind the Enzo, an exhilarating 1985 Ferrari 288 GTO sold for $2,310,000 during the Friday sale session, taking the second top sale slot. Enjoyed by a mere three caretakers throughout its life, the 288 GTO was originally delivered to well-known Ferrari collector Hartmut Ibing optioned with factory air conditioning and power windows.

“We are extremely pleased with the results of our first Online Only collector car auction curated specifically for the digital platform,” comments Gord Duff, Global Head of Auctions, RM Sotheby’s. “We saw continued momentum from our Online Only Palm Beach car auction, with considerable pre-sale interest from consignors and bidders, as well as activity throughout the auction with more than 550,000 total page views. We also saw an abundance of bidding throughout the week and during the closing days with an increased average of 19.6 bids per lot, up to a total of 56 bids on a single lot. Stand-out prices resulted across the sale, demonstrating sustained demand from collectors for buying and selling a wide spectrum of quality cars online—including blue-chip collectibles. The sale of both the Ferrari Enzo and 288 GTO mark a significant milestone for what the RM Sotheby’s Online Only platform can achieve, as well as the confidence with which our clients can bid.”

Beyond the Ferrari highlights, supercars were also well-represented in the Online Only sale by an iconic trio of Ford GTs—a 2017 GT, a 2006 GT Heritage and a 2005 GT. Born and bred on the racetrack, the nicely optioned 2017 Ford GT was offered at auction equipped with carbon fiber wheels and finished in stunning Triple Yellow with Lightning Blue stripes. Powered by 647 hp, 3.5-liter twin-turbocharged V-6 engine, the GT achieved a final $836,000. Holding the unique distinction of being the final Heritage GT built for 2006, the three-option Heritage was offered from just two owners since new, showing just 5,400 miles and sold for $385,000. A desirable, four-option example, the 2005 GT presented wonderfully in Mark IV Red with white racing stripes and brought in $290,000.