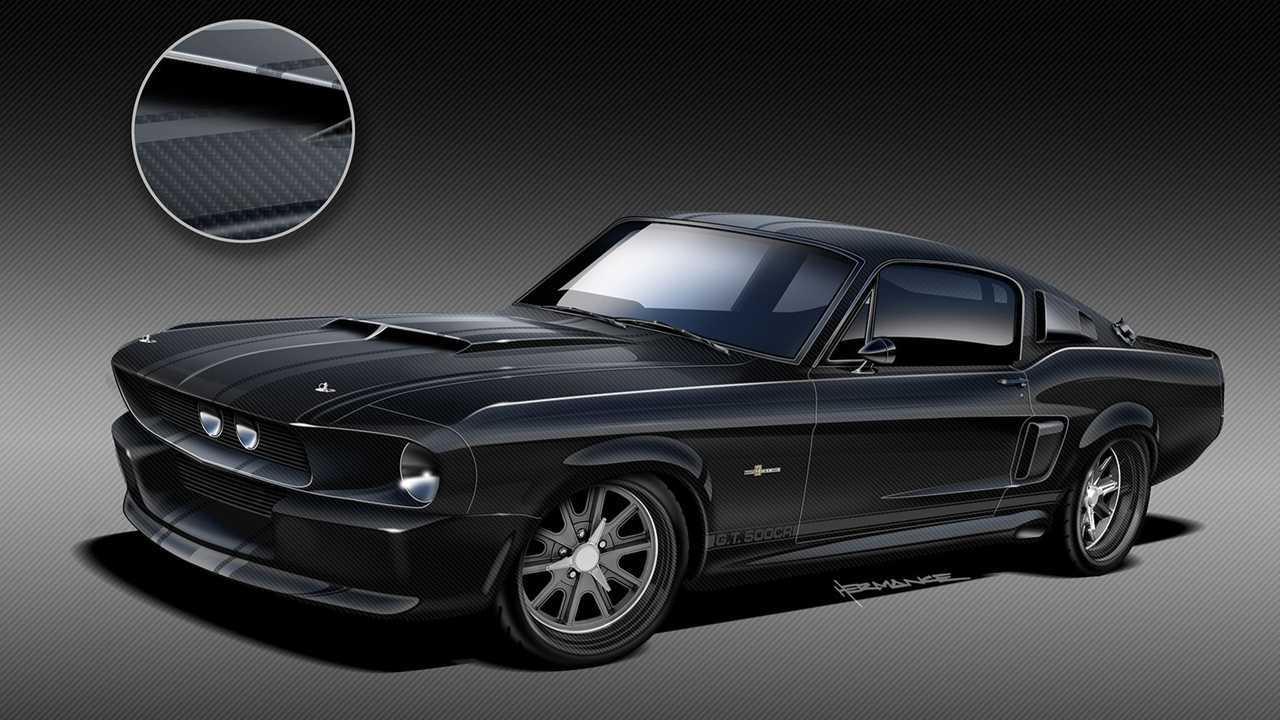 Oklahoma-based Classic Recreations has been pampering Ford Mustangs for more than 15 years, investing some 2,500 man-hours for each built-to-order vehicle. Their GT500CR starts off at a steep $204,900, and while pricing for this new version has not been specified, it has to be way more expensive. That’s because the makers of licensed Ford and Shelby American continuation cars are introducing a lightweight version featuring a full carbon fiber body.

Classic Recreations teamed up with carbon fiber specialist SpeedKore to develop this beauty based on a 1967 or 1968 Mustang donor car. A lot of work has to be done even before applying the new body as the steel tub is fully restored in a time-consuming process. It’s only after that work begins on the new body, perfectly replicated thanks to a 3D digital model produced from SpeedKore’s blue light scan of an entire GT500CR.

A five-axis CNC machine is used to cut the molds and then the carbon fiber body panels are cured in an autoclave. Classic Recreations says the body is not only lighter than the original steel, but it’s also stronger and with a perfect carbon fiber weave alignment.

See Other Projects From Classic Restorations:

Beyond restoring the chassis and applying new body panels, the GT500CR also receives a wide variety of upgrades. Several engine options are available, kicking off with a 5.0-liter Coyote developing 490 horsepower all the way up to a supercharged 7.0-liter unit with a massive 900-hp output. Regardless of what’s fitted under the hood, the cars come equipped as standard with a Tremec five-speed manual gearbox and feature a MagnaFlow stainless exhaust system.

If you’re not a fan of the naked carbon fiber look, the GT500CR can be painted in a variety of colors. Additional customizations are available upon request, including interior upgrades and a choice between a six-speed manual and a few automatic transmissions.

Should you want the flagship 900-hp variant, get ready to pay a small fortune considering the regular Shelby GT500CR-900S with the steel body begins at $284,900.

YUKON, Okla. (May 20, 2020) – Classic Recreations, the Oklahoma-based builder of officially-licensed Ford and Shelby American continuation cars and restorations has enlisted SpeedKore Performance Group, the Wisconsin-based carbon fiber manufacturer, to produce carbon fiber bodies for its Shelby GT500CR models. The first of its kind, the program is part of an initiative by Classic Recreations to build the next generation of modern high-performance vehicles with iconic classic American styling, followed by a Shelby-licensed all-carbon-fiber-bodied Cobra in the future.

“When we decided to build the carbon-fiber-bodied GT500CR Mustangs, we wanted to work with someone who shared our vision for the future of custom car building,” said Jason Engel, Founder and President of Classic Recreations. “Having a supplier that is equally committed to high-quality craftsmanship and producing innovative vehicles is incredibly important to us and we found that matched commitment in SpeedKore.”

Classic Recreations’ standard Shelby GT500CR starts with an original 1967 or 1968 Mustang body that is restored to like-new condition using hundreds of man-hours of labor. The carbon fiber GT500CR also begins with a restored donor steel tub that is then fitted with all-new carbon fiber body panels. Starting with a 3D digital model produced from SpeedKore’s blue light scan of an entire GT500CR body, a five-axis CNC machine cuts the molds, and then plugs and panels are pulled using aerospace-grade prepreg carbon fiber. The molded carbon fiber body panels are cured using a massive in-house autoclave. The result is the world’s first officially-licensed Shelby Mustang that is lighter and stronger than an all-steel body and has perfect carbon fiber weave alignment. The precisely manufactured, hypercar-quality carbon fiber bodies can be produced efficiently to exacting specifications.

“Since 1998, Mr. Shelby believed that carbon fiber would be the future of American sports car manufacturing. We believe the introduction of a carbon-fiber GT500 Mustang and Cobra is a natural next step in the evolution of these iconic vehicles and builds on the legacy of the same innovation that Carroll Shelby was known for,” said Neil Cummings, Co-CEO of Carroll Shelby International.

“Classic Recreations has consistently been a loyal and innovative partner and licensee for Shelby and we’re excited to see what the future holds for this program,” Joe Conway, Co-CEO of Carroll Shelby International explained.

Under the carbon fiber body is a modern high-performance vehicle. GT500CR models are available with several engine options, ranging from a 490-horsepower Ford Performance Gen 3 5.0L Coyote crate engine up to a 900-horsepower, hand-built 427-cubic-inch engine with an intercooled ProCharger supercharger. All Shelby GT500CR models are equipped with a Tremec five-speed manual transmission and a stainless-steel MagnaFlow performance exhaust.