VW Remembers Its Most Aerodynamic Vehicle Ever 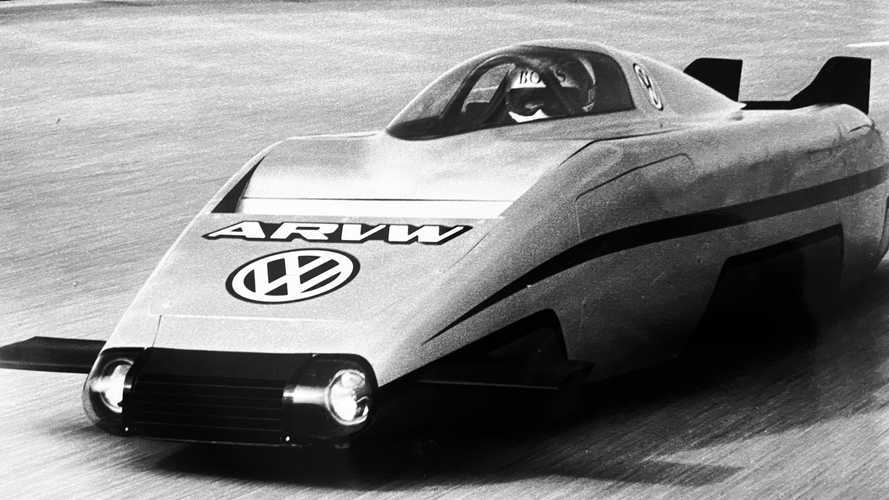 There are generally three ways to make a car go faster. You can make it more powerful, make it lighter, or make it more aerodynamically optimized. The latter also plays a key role in the vehicle's efficiency as a whole, as moving through the air in a more aerodynamic car means less energy consumption.

Regardless if we are talking about classic cars or modern cars, aerodynamics are important. Volkswagen is highlighting its efforts to make more streamlined cars with the story of its most aerodynamic cars ever. Called the Aerodynamic Research Volkswagen, it was revealed in 1980 as a single-seater with a drag coefficient of just 0.15.

The engineers of the company had a very simple task that had a very complex solution - fit a driver, an engine, and four wheels and make the car as aerodynamic as possible. It was built on an aluminum frame with a fiberglass and carbon body. It was just 33 inches tall and 43.3 inches wide, and had hidden wheels, smooth underbody, and moveable fins that helped keep it stable at high speeds.

The end result was stunning. The car had a relatively small 2.4-liter turbocharged gasoline engine with a peak output of 177 horsepower. It was located right behind the driver’s back and was linked to the rear wheels directly through a chain drive. The powertrain had a very interesting cooling solution - one massive cooling vent positioned in the nose to let air flow smoothly over its radiator and exit on top of the vehicle. Plus, an onboard water tank that injected water into the turbocharger’s intake.

A Look At VW's Rich History:

In October 1980, a team of Volkswagen engineers and test pilots visited the Nardo track in Italy to test the car’s capabilities. In the first hour, the ARVW hit 221 mph and eventually topped out at 225 mph, setting two world speed records in the process.

Aerodynamics play a key role in every modern vehicle. The less drag a vehicle generates when moving through the air, the less energy it consumes and the more quietly it moves.

Over the years, automakers have experimented with extreme vehicle shapes to demonstrate the innate relationship between drag and power. Few have been more radical than the Aerodynamic Research Volkswagen of 1980, a single-seat arrow that remains the most aerodynamic vehicle ever built with a VW badge.

Sparked by the oil crises of the 1970s, the ARVW was meant to demonstrate how aerodynamics and lightweight vehicle construction could generate massive speeds from everyday power. The first challenge was squeezing a driver, powertrain and four wheels into a body that could have the smallest profile possible. At just 33 inches tall and 43.3 inches wide, the ARVW’s shape was maximized at every turn for aerodynamic smoothness, from its hidden wheels and smooth underbody to moveable fins that helped keep it stable at high speeds.

The ARVW was built from an aluminum frame under a fiberglass-and-carbon body. Power came from a 2.4-liter, turbocharged, inline-six engine, which produced 177 hp, set right behind the driver and powering the rear wheels via a chain drive. By using an onboard water tank that injected water into the turbocharger’s intake, the engine needed few cooling vents, and the main cooling vent was positioned in the nose to let air flow smoothly over its radiator and exit on top of the vehicle.

The results were a vehicle with a coefficient of drag of 0.15, a number that remains far sleeker than any production vehicle. In October 1980, a small team of Volkswagen engineers and a top-tier open-wheel racing driver went to the Nardo test track in Italy to demonstrate what the ARVW was capable of. In the first hour, the ARVW hit 221 mph. It eventually topped out at 225 mph, setting two world speed records in the process.

The shape of the ARVW would later find an echo in the radical European-only XL1. And as low drag coefficients provide sizable benefits to an electric vehicle’s range, advanced aerodynamics will play an essential role in the upcoming ID. electric vehicle family.