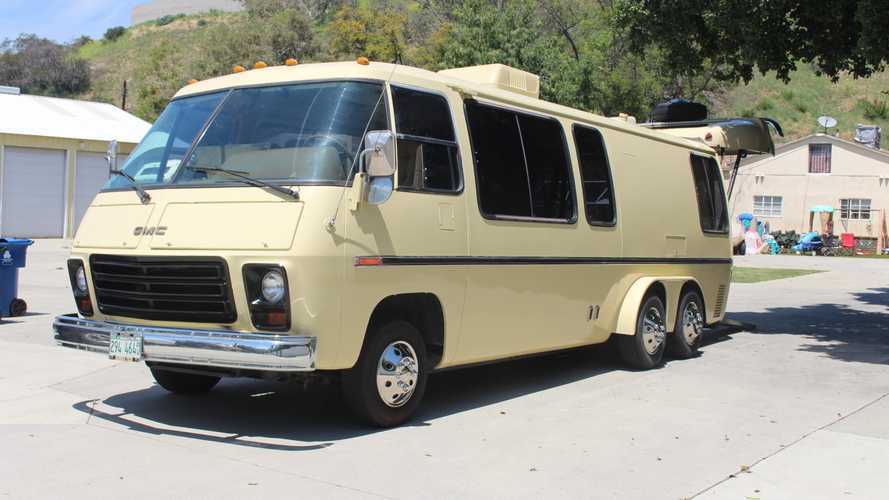 Update: The GMC MotorHome car hauler sold for $17,000 after a one-day auction extension, due to a server error in the last scheduled hour of bidding. That's a bit less than our early estimate of $25,000, but comparable to the values of other non-customized GMC RVs in similar condition.

The 1975 GMC MotorHome currently listed without reserve on Bring A Trailer isn’t quite what it seems. The selling dealer, which has owned the MotorHome for 18 years, turned the legendary and unique RV into a stealthy car hauler in 2003. With distinctly disco styling and very subtle exterior modifications, this 26-footer might be ideal for someone with a penchant for bringing home Malaise-era projects.

Accessible through a power-operated clamshell hatch is a 17.5-foot cargo bay, and built-in load ramps fold down on deck-mounted hinges. According to the BaT auction listing, the conversion required widening the rear track, installing custom wheel arches, and jettisoning the rearmost bits of the interior. A plywood floor with E-Track tie-downs should make securing a vehicle (or other load) easy. The auction includes a video and photo of a classic Jaguar XJS making itself cozy inside the mobile garage.

In addition to the subtle exterior changes and significant interior modifications, the seller also recently refurbished the electrical system and air suspension, and new fuel lines lead to the 7.5-liter (455-cubic-inch) Oldsmobile V8 – the MotorHome made use of a modified Toronado front-drive transaxle. Since it wasn’t needed for house power anymore, the seller removed the onboard generator.

The ad does raise a few questions about the overall running condition of the GMC MotorHome. Tires that are two decades old make us wonder how long it has been sitting, as does the mention of “a fresh fuel filter and fresh gasoline” to prepare it for sale. Video of the car hauler starting and revving is provided, but the advertisement makes no claim about how it drives on the road.

Recognise this Pontiac? NASA used it as a towing vehicle

Cosmetically, it looks lovely from the outside, with a recent respray of original pale yellow paint over its aluminum and fiberglass bodywork. The chrome bumpers and wheel covers carry a nice shine in the photos, and the black grille and headlight buckets contrast nicely. Window rubber also looks surprisingly nice. It could be parked on the lawn at a local concours – right next to the perfectly restored classic it hauled there.

Inside is a bit of a different story. The cockpit looks comfortable enough, with an aftermarket CB radio earning points while an early-2000s CD player loses them. The upholstery and carpeting are likewise presentable. But the cargo area isn’t finished as nicely, with ragged edges on the headliner, carpeted built-in storage, and factory interior paneling where they were cut to make room for the garage. Meanwhile, exposed spray foam insulation betrays the conversion’s MotorHome roots and leaves the project feeling unfinished. It’s only unfortunate because the exterior is so attractively done, though one could argue that as a utility machine, it's adequate.

Bidding ends in four days, with the price currently sitting at $11,000. Bring A Trailer auctions frequently skyrocket in the last hour or so of bidding, so we won’t be surprised if this example demands $25,000 or more. Regardless, this 1975 GMC MotorHome will find a new owner at the end of the auction since it is offered without reserve.