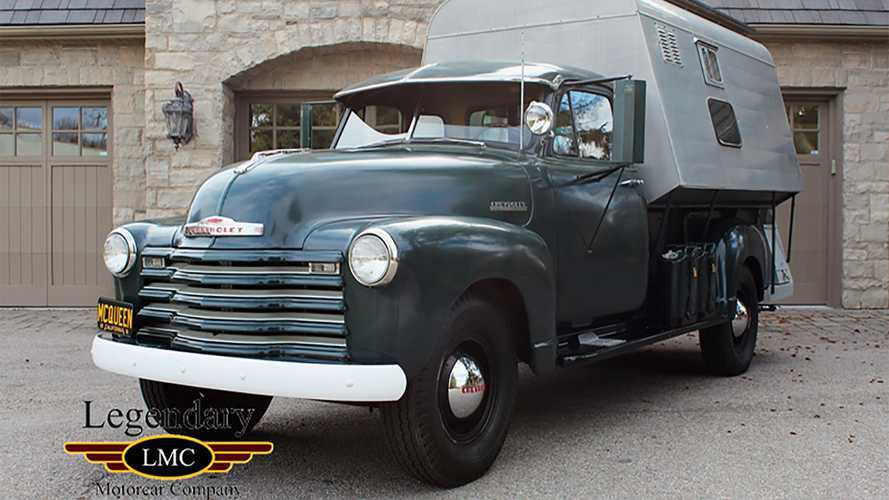 McQueen bought it from a migrant farmer in the late 1970s.

Steve McQueen was famous both on and off the silver screen for his love of automobiles. His eclectic collection of vintage cars and motorcycles is legendary, with many of the pieces finding new homes and lives long after he's passed away. The latest that's up for sale online through Legendary Motorcar Company is a 1952 Chevy 3800 pickup with a camper in the bed.

According to the listing, McQueen bought the Chevy in the late 1970s from a migrant farmer, long after Harold Van Hoosen, a sheet metal fabricator from Yreka, California, built the camper in October 1952. McQueen's Chevy is a one-ton step-side long-bed powered by the original 235-cubic-inch six-cylinder engine paired with a four-speed manual gearbox.

The camper is made from galvanized aluminum featuring a double-size bed, storage, and more. Inside the cabin, the '52 Chevy came with the Chevy five-window design, two-tone bench seat, and a sun visor. Amenities, high-end at the time, included an AM radio and heater. Other features include five-gallon gas tanks with running boards, a spotlight, and two toolboxes.

Steve McQueen's 'On Any Sunday' motorcycle for sale
⠀

This camper has a bit more history than just being owned by, and ferrying, McQueen. It also transported him from his Santa Paula, California, home to the Ventura County Airport when he flew to Mexico for his final cancer surgery. Reverend Billy Graham was with him and gave McQueen his Bible before they parted.

The Chevy found a new owner in 1984 at McQueen's estate auction. Included in the sale is the original Certificate of Authenticity from that auction, which is signed by Terry and Chad McQueen. The sale also includes the auction ticket and advertisements along with the original 1959 California license plates and three pink slips in McQueen's name.

Not only does the truck have some serious Hollywood history behind it, but the 1952 Chevy pickup was itself important. It was one of Chevy's first significant redesigns after WWII, and it saw several small changes over its lifetime between 1947 and 1955. If you've been interested in living like McQueen, or just want a cool retro camper, now is your chance.