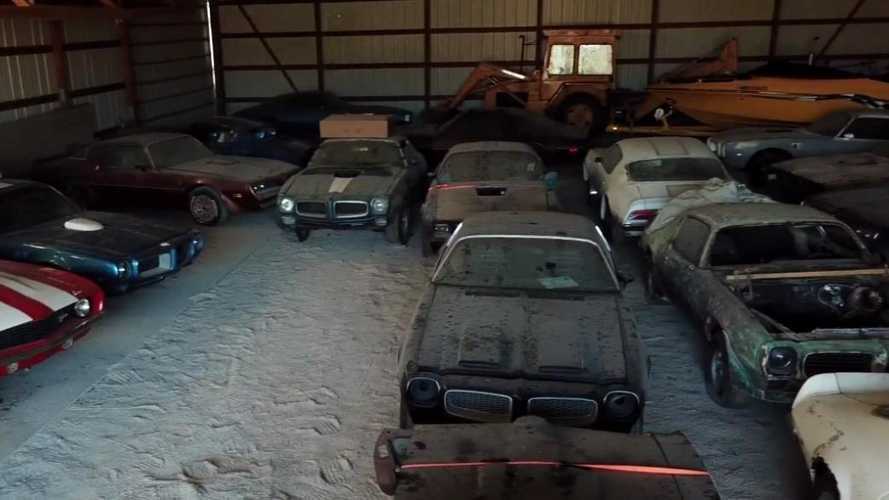 Restore a Muscle Car finds, restores and sells classic American muscle. But now it wants you to take on restoration of some of its stars

Restore a Muscle Car is a firm in Lincoln, Nebraska that takes huge numbers of classic American muscle cars and restores them to a sellable condition. Such is the size of its inventory that it now has too many cars and not enough time to restore them all, and is selling many of its unrestored models. Company employee Dave Hall has been kind enough to take the internet on a video tour of one of the sheds of classics, many of which are literal barn finds, that need a new owner.

The first car on display is a 1971 Pontiac Firebird Trans Am, fitted with 455ci H.O. V8 engine. It spent a quarter of a century in a Minnesota barn, and it currently lives in one of Restore a Muscle Car’s own barns. It has the standard blue interior, and is one of several of the cars that has a guarantee that it runs and drives despite being unrestored.

There’s several other ‘71 H.O. Trans Ams stashed in the same barn, one with a black deluxe interior and is a one-owner car from California, and another that is a rare black on black car with a rebuilt engine, and a ‘72 Trans Am lacking a drivetrain, and with a white and blue colour combination.

The newest Firebird in the collection is a 1989 model, also one of the newer additions to Restore a Muscle Car’s collection, and has its original 350ci V8 engine. It also has an automatic gearbox and a deluxe interior, albeit a little dusty having been stored in a barn. But importantly it is rust free.

Although the H.O. V8 engine appears regularly in this muscle car collection, it’s rivalled in popularity by the Ram Air series of engines, which powers a 1970 Trans Am saved from an Iowa field and a blue 1973 Trans Am from New Mexico among many. Oldsmobile’s leading muscle car V8 engine appears in two 1977 special edition Trans Ams, but was replaced by Pontiac’s own engine, one of the most sizeable to appear in a production muscle car, two years later.