Was It Worth $4.5M To Watch The General Lee Fly For 3 Seconds? 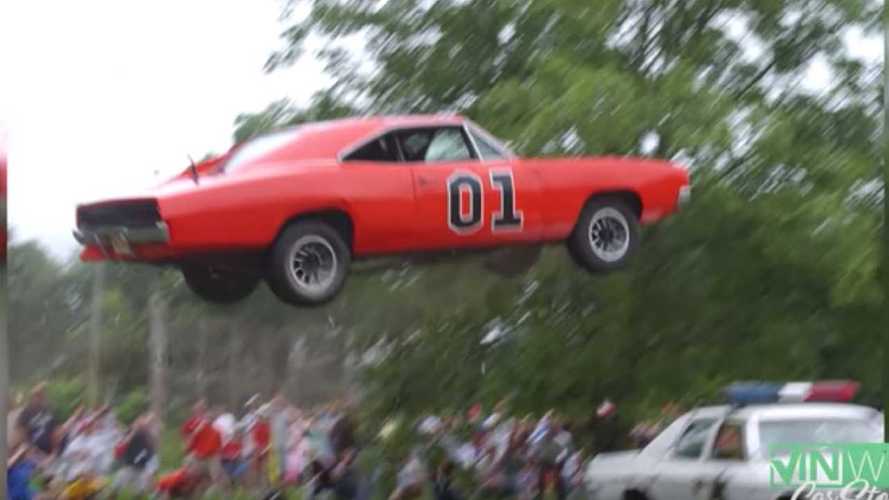 The stunt may have cost a large chunk of change but for Travis Bell, it was priceless.

As kids, we were all impressionable with a sponge-like mind and equipped with an imagination that knows no bounds. We have all dreamed about one thing or another when we were children, something we would hope to see in our lifetime. For Travis Bell, owner of Celebrity Machines, his dream growing up was always to see the General Lee fly. But, what exactly what does it take to send a '69 Dodge Charger through the air? While most probably think of sending a flying Mopar through the air as no big feat, plenty of time, work, and money went into making this is as legal and accurate as possible.

Bell followed all the necessary steps such as insurance, obtaining the right permits, flying out 7 crew members, the mechanics who originally built the car, and making the car appear as a real deal General Lee, constructing a ramp, securing a location, among other things. Just think, approaching an insurance company about sending a classic Charger threw the air and getting a bite is almost slim to none. However, the Lloyds of London agreed to do it, but it came with no small price tag. With everything in place to jump a General Lee, it cost $4.5 million. You read that right, $4,500,000 to jump one car.

As Bell grew older, he became even more obsessed with the General Lee, and he wanted to build one and become friends with not only the cast, but the also the stunt men behind the wheel of the vintage Mopar. Bell started the North American General Lee Fan Club Convention in 2001/2002, which would eventually be renamed Dukes Fest later on, and his little house Indianapolis became a destination for the Dukes of Hazzard. The convention did attract stunt men and special effects guys, and Bell would track them down and talk to them about the show.

Considered an action-comedy, the Dukes of Hazzard series aired on CBS for 7 seasons starting in January 26th until on February 8, 1985. In the later seasons, miniature models were used for the jump scenes. Bell located the man in charge of making those miniature models, knocked on his door in Redland, California, and talked to him about the show. Bell's main goal was still to make the General Lee fly.

While talking with the guys who made the real life-size General Lees used in the show, Bell learned plenty of information and stories that took place behind the scenes about the car. One mind-blowing fact that he learned was that they destroyed 321 Dodge Chargers to play just one General Lee through a span of 7 seasons. Because the '68-'70 Chargers were actually unibody cars, even jumping one about 3 feet could be a fatal blow.

A '68 Charger was donated for Bell's attempt, and since the goal was to destroy the car anyway, the amount of bondo on the car was not an issue. With the help of a mechanic hired for the show, the car was slathered in bold orange paint, decals, and a given a few '69 Charger components to make it into a General Lee. The car was then sent to another mechanic in North Carolina to be outfitted with a roll cage.

Because villians usually drive 4-door Malibus in these shows, Bell and his team purchased one and also stuffed it with a roll cage. They also went out and bought two more place cars to use as cop cars, and they 'roll-caged' those as well.

Gallery: Is It Worth $4.5M To Watch The General Lee Fly For 3 Seconds?

The first five seasons of Dukes of Hazzard was filmed in Covington, Georgia, so Bell paid a visit to there to speak with authorities to see if he could use the location to jump the car since the original General Lee made its first jump there on Saturday, November 11th, 1978 in front of Oxford College. He was given the green light to jump the car at Soldier Field if he acquired all necessary permits, as well as insurance.

Since this was happening way before Facebook and the power of social media, Bell was faxing press releases from his home when got a call from Warner Brothers. Worried that they were going to crush the whole idea and shut it down, he anxiously answered the call expecting the worst. With $4.5 million tied up into the whole deal, one would be somewhat uneasy if stepping on toes that big. The call was from Silverman, and he asked about the event and then mentioned that they were planning to make a movie based on the show.

The day of the big jump, it was raining heavily all morning. With a life-changing chunk of change on the line, Bell had to make this happen today. When he arrived at a somewhat flooded Soldier Field, there was a long line of people waiting there to see the General Lee in action, enough to hire some local law enforcement to make everything go as smoothly as possible. With the jump scheduled at 2 p.m., the rain finally broke around noon.

One of the stunt men on the show for Bo Duke, expressed interest in barrell-rolling the Chikasaw police car that Bell and his team built before the main jump Before long, a pipe ramp was built, and the vehicle went rolling, eventually coming to a stop upright on all four tires.

General Lee was next up, and the ramps were put in place to make the long jump. Backed up far for momentum with the patrol cars in place, including a jump over Rosco's original patrol car, it was time to let 'er rip. The General Lee sped toward the ramp and as it did, the car recoiled and the rear end comes over and sends the car into a straight nosedive to the ground after launching 180 feet. After it hit the ground head first, the muscle car was sent flipping end over end. The stunt driver was unhurt, but the Charger took a severe beating. Jumping over Rosco's police car was a success, and the jump itself was incredible with plenty of spectators in attendance.

So, was it worth the $4.5 million dollars, the seemingly infinite planning, and everything else involved in the whole process to jump the General Lee? We can tell Bell has no regrets.