Haul It All With This Custom 1965 Ford Mustang Ranchero Mashup 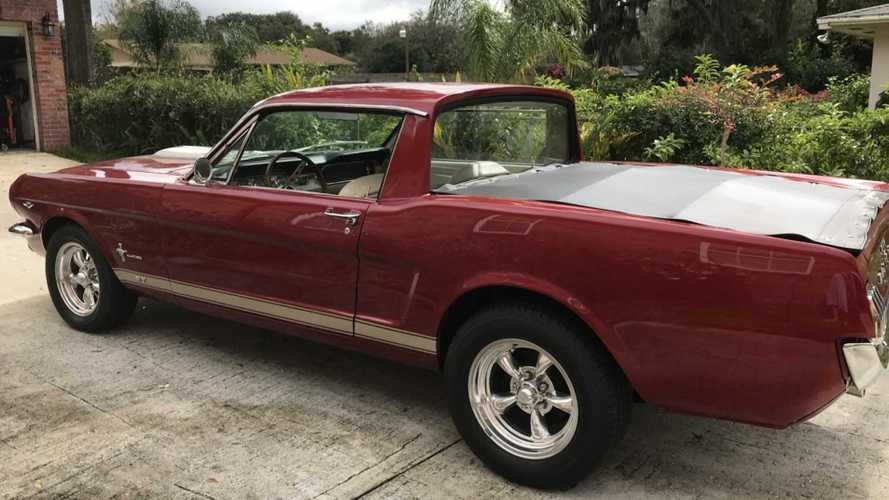 All Mustang up front, Ranchero out back.

The Ford Ranchero was a multipurpose vehicle that shared similarities with a pickup truck but was built as a utility coupe. Produced from 1957 through 1979 with 508,355 units under its belt, the Ranchero fused the cab and cargo bed together and sat it on a two-door station wagon platform. Now, let's take Ford's flagship pony car, the Mustang, and mix it with the rugged Ranchero. In fact, Beverly Hills Ford produced a limited run of the 'Mustero', a play on words for the two, and built just 50 units. Flaunting both multipurpose and muscle, this is a completely custom 1965 Ford Mustang Ranchero conversion that will be sent across the stage at Carlisle Auctions during their 2020 Lakeland Winter Autofest auction in Florida.

Blanketed in a shiny, deep burgundy hue, this custom conversion was done right. All new weather stripping was added, and a set of 15-inch American Racing wheels sit on all four corners. Open the doors to reveal an immaculate white interior that adds welcoming contrast against its dark exterior. Also inside, the car features Dolphin Gauges with a tachometer.

Under the hood sits the factory 302cui V8 engine equipped with a Holley four-barrel carburetor, HEI distributor, and one-wire altenator. Power is shifted to the pavement through a C4 automatic transmission with a shift kit. The front end was rebuilt along with the disc brake system. The exhaust note is provided by a factory GT-style dual exhaust that exit via GT tops.

Gallery: Haul It All With This Custom 1965 Ford Mustang Ranchero Mashup

This car is all Mustang up front, Ranchero out back. If this vehicle was directly behind someone in traffic, one would never suspect that the car was anything but a '65 Mustang. One might be a tad bit surprised when they realize that this classic rocks a bed.

As mentioned above, the Ranchero had an impressive lifespan of 22 years proving the fact that it was a popular vehicle. Even General Motors jumped on the bandwagon in 1959 with the Chevrolet El Camino.

If this custom '65 Ford Mustang Ranchero blend is up your alley, be sure to register and bid online through Carlisle Auctions for their 2020 Lakeland Winter Autofest auction coming up February 21-22 starting at 10:30 a.m. Even better, you don't even have to leave your couch because you can bid online.