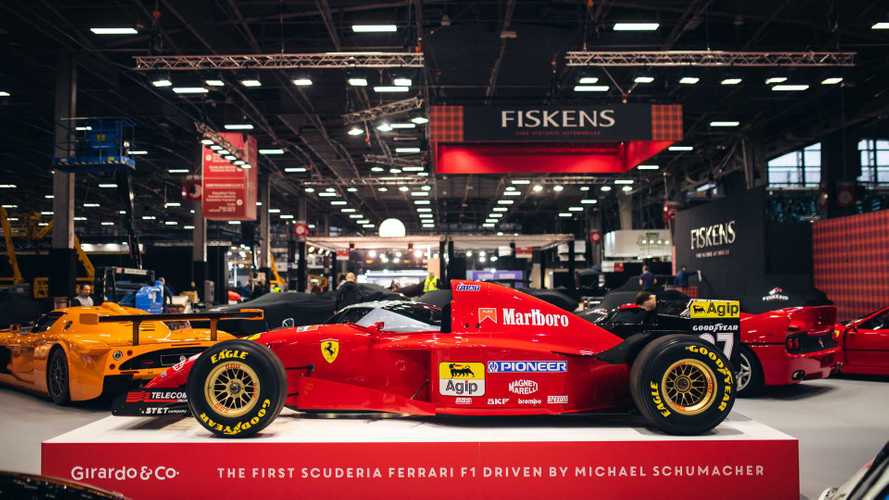 Michael Schumacher was already a top Formula 1 driver before he started his 10-year stint at Scuderia Ferrari, but his time with this race team made him a household name among racing enthusiasts. After joining the team in late 1995, the very first Ferrari racecar Schumacher drove was this 1995 Ferrari 412 T2 car with chassis no. 157, and this very car is up for sale through Girardo & Co. the same London-based company currently selling the Campion Collection of Martini-liveried racecars.

Although Ferrari 412 T2 chassis no. 157 is most notable for its use as Schumacher's first test vehicle after joining Scuderia Ferrari, this car's racing history occurred with French racing driver, Jean Alesi, behind the wheel during the 1995 season – when Schumacher was becoming the youngest two-time F1 champion with Benetton. Alesi piloted this car to multiple podium finishes that season including a first place finish at the 1995 Canadian Grand Prix, which was also the time a V12-powered Formula 1 car won a Grand Prix. Following the 1995 season, Ferrari switched to the V10-powered F310 racecar making the 412 T2 obsolete.

After its retirement, Scuderia Ferrari sold chassis no. 157 to a German car collector before selling it to Dutch racing driver, Klass Zwart. Under Zwart's ownership, 412 T2 chassis no. 157 was raced at several events and even driven at the Monaco Historic Grand Prix in 2013. It was purchased by its current owner in 2013, who had the racecar inspected and certified by Ferrari Classiche. Chassis 157 was restored in 2018 in Maranello, Italy, and it's being sold in track-ready condition.

Girardo & Co. has not revealed pricing for this 1995 Ferrari 412 T2, but considering it was formerly owned by one of the most successful F1 teams and driven by the sport's most successful drivers, this car is sure to be worth a fortune.

Watch Earnhardt's Last Race-Winning Car On The Track At 'Dega