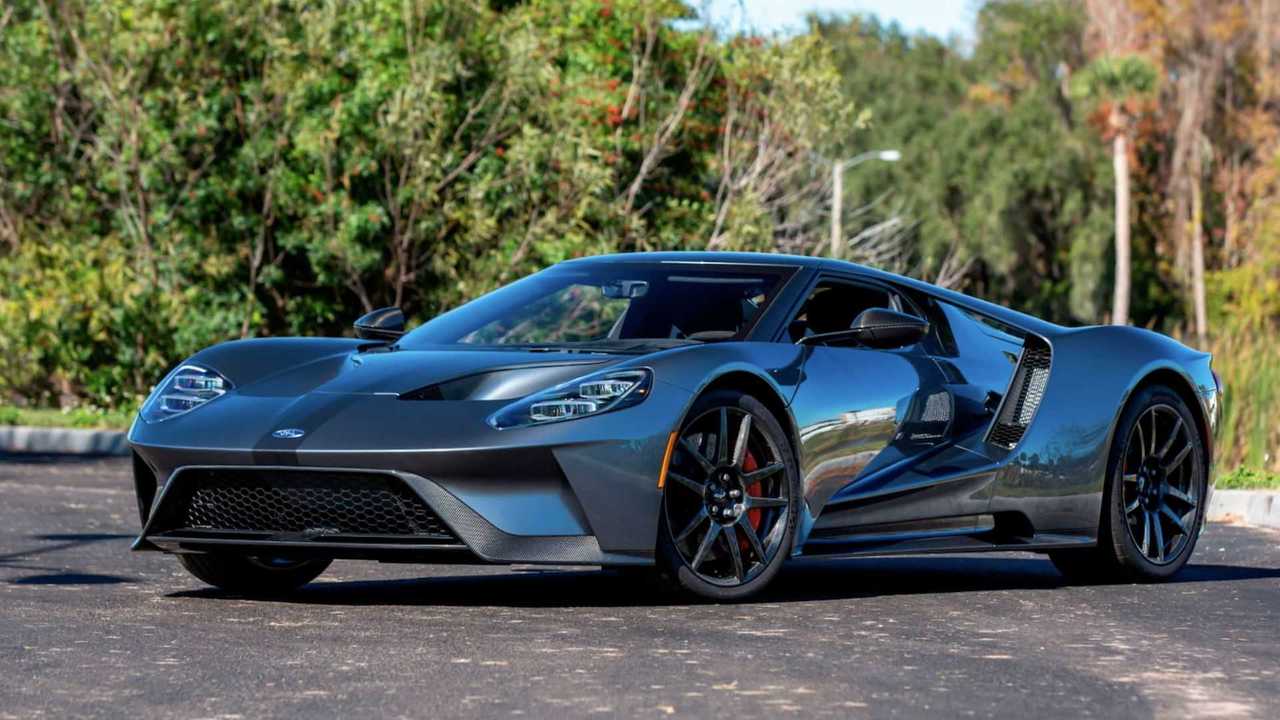 It’s an American supercar that tops the dream car list of many car enthusiasts.

Reminiscent of its GT40 kin, the third-generation Ford GT is full of lightweight carbon fiber goodness. Not only does the car look aggressive, but it has a bite to back up its bark. This stunning 2017 Ford GT with race history is crossing the Mecum auction block (Lot S117) in Glendale on Saturday, March 14th. This Ford GT Competition Series is just one of 6 built total, and it is only 3 to remain in Competition Series specification. Even better, the Mecum after auction party will feature music from Lifehouse and Billy Ray Cyrus, so you can enjoy a concert while picking up your new American supercar.

Back in 1964, the famous rivalry began between Henry Ford II and Enzo Ferrari due to Ford turning down Ferrari’s offer to purchase the American company. After battling for two years, Ford came out victorious during the 24 Hours of Le Mans on June 18-19, 1966 as the GT40 MkII racecars, powered by a beastly 427cui V8 engine, nabbed the three top podium spots.

Bourdais grew up around the Le Mans track and had raced there 10 times before going back to 1999. He was runner up in 2007, 2009, and 2011, and his last finish was just 13 seconds behind the victor. His last attempt in 2016 proved victorious as he placed in first place overall.

This example is one of the 3 remaining Ford GT Competition Series (No. 67), and it is slathered in a shiny yet menacing Liquid Gray topped with a centered carbon fiber racing stripe over a black interior. Other exterior highlights include carbon fiber A-pillars and side mirrors, exposed carbon fiber lower sill trim with a gloss finish, unique Perspex acrylic engine hatch cover with a manual latch and carbon fiber prop rod, carbon fiber 10-spoke wheels with titanium nuts wrapped by Michelin Pilot Sport Cup 2 rubber.

With just 265 miles on the clock, it is safe to say that it is in immaculate shape inside and out. Inside the car is a stealthy black cockpit with Alcantara upholstery with red accents and a F1-style steering wheel with functional controls. Other interior goodies include air conditioning, stereo and speakers, carbon fiber console and door sills, and an FIA-certified steel roll cage. To save weight, the storage bins and cup holders have been removed. Even more, the interior features a red commemorative plaque with engraved signatures of the winning drivers. Lightweight bulkhead Gorilla glass was also installed.

Powering this beast is a mid-mounted 3.5-liter EcoBoost equipped with a pair of turbochargers that propel the car to an impressive 647-horsepower and 550 ft/lb of torque. Even more, the car can reach a top speed of 216 miles per hour. Power is shifted to the rear wheels via a 7-speed dual clutch transmission with paddle shifters. Added performance and rumble are provided by the titanium exhaust with tips protruding out of the rear bumper. The car comes with 5 different drive modes and 2 variable ride height settings. Handling comes from a front and rear independent suspension with electronic adjustable damping and front lift system with the push of a button. Stopping power is provided by big Brembo vented disc brakes.

As one of the perks of winning the big race, the team was given new Ford GTs and this one went to Sebastien Bourdais. After joining the Ford GT racing program in late 2015, the team inquired about getting a Ford GT from Raj Nair, Ford executive VP among other titles, and the answer was yes. A few months later, the team each had their very own with Bourdais’ car arriving just in time for Christmas 2017.

If you’re interested in this beastly 2017 Ford GT Competition Series, make sure to tune in to Mecum on Saturday, March 14th (Lot S117) and place your bid on your dream car. Once the hammer comes down deeming this car yours, make sure to check out the auction after party with music from Lifehouse and Billy Ray Cyrus. Sounds like a win-win!

Ford GT The One Commercial Was Amazing