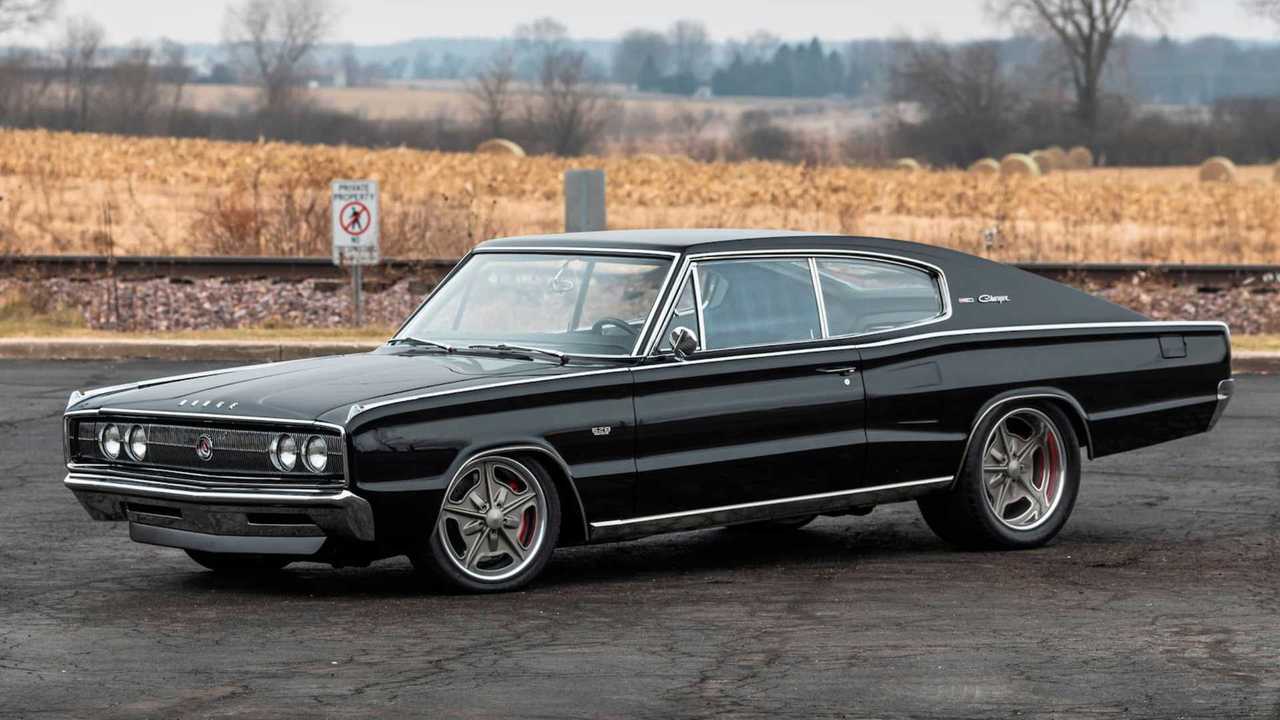 Can you imagine waking up to this incredible '67 Dodge Charger restomod in your garage everyday?

Just one glance at this fully restored 1967 Dodge Charger Restomod may have your heart skipping a beat or two. With sleek body lines mixed with dangerous curves and a potent powerplant, every bit of this car just screams perfection. The good news is that this black beauty is up for grabs through the Mecum auction that takes place in Glendale this March 11-14, 2020. This example (Lot S88) is on the docket for Saturday, March 14. Even better, grab tickets to the Mecum after auction party featuring Lifehouse and Billy Ray Cyrus. Now, that sounds like a win-win as you take home this '67 Dode Charger restomod. Can you imagine waking up to this Charger restomod in your garage every morning?

With an aggressive stance, this Dodge Charger was the end product of a professional build by Johnson's Hot Rod Shop (JHRS) out of Gadsden, Alabama. While a few tweaks were made by the guys at JHRS, the unique body lines remain intact with the subtle changes only noticable upon close examination. Those subtle tweaks include the narrowing of both the front and rear bumpers, and a flush fitment to add to the overall aesthetic. The front bumper was given small openings to force cool air to the transmission and power-steering coolers to keep everything running flawlessly, and the rear bumper also features horizontal openings to accomodate the dual exhaust tips. Even the driveline has been moved closer to the body of the car which improves the overall visual aspect as well as improving aerodynamics. Even more, this beaut was given a new transmission and driveshaft tunnel, and the rear wheel wells were moved inward by 3 inches on both sides. Finishing the exterior is a set of Billet Specialties Lobeck wheels (18x9 front, 19x12 rear).

Stuffed inside the engine bay is a Ray Barton-built 528cui Hemi V8 engine backed by a Bowler 4L80E automatic transmission. The Mopar Performance iron block was bored to 4.5 inches with other mechanical highlights that include aluminum heads with 2.375/1.900-inch valves, cross-ram intake manifold topped with dual Edelbrock 650cfm carburetors, Barton forged crank with 4.15-inch stroke, forged crank, billet steel rods, JE 10.0:1 pistons, and a Barton hydraulic roller cam. Providing the spark that roars this restomod to life is a MSD 6AL ignition that works in conjunction with a Mopar Performance distributor. With everything combined, this beauty makes a beastly 651-horsepower and 618 lb/ft of torque. That power is sent down through a sturdy Dana 60 rear end with 35-spline axles and 3.50:1 ring and pinion. Handling duties are provided by a Magnum Ford 4-link suspension with RideTech coil overs on all four corners, and a Magnum Force K-member with tubular control arms and anti-sway bar. Stopping power comes from 14-inch Viper disc brakes. Further adding performance and rumble is the addition of longtube headers that send gases down through an x-pipe and exit via Magnaflow mufflers.

Gallery: Get Your Hands On This Restored 1967 Dodge Charger Restomod

This '67 Charger is definitely cover car worthy as it was featured on the cover of Popular Hot Rodding magazine in 2012. The builders at JHRS left no stone unturned when restoring this first-generation Charger restomod. The shop has been building incredible cars since the early '90s, and that includes a '37 Ford that dominated the '93 NSRA Street Rod Nationals and graced the cover of multiple publications. Even more, they built the 2006 Good Guys Street Machine of the year along with winner of the Ridler Award at the Detroit Autorama in 2009.

So, if this '67 Dodge Charger Restomod has caught your eye, be sure to check out the Mecum Glendale Auction on March11-14, 2020, with this example (Lot S88) set to cross the auction stage on Saturday, March 14. Go ahead and grab tickets to the after auction party and listen to some solid music featuring Lifehouse and Billy Ray Cyrus before taking home your stunning '67 Charger.