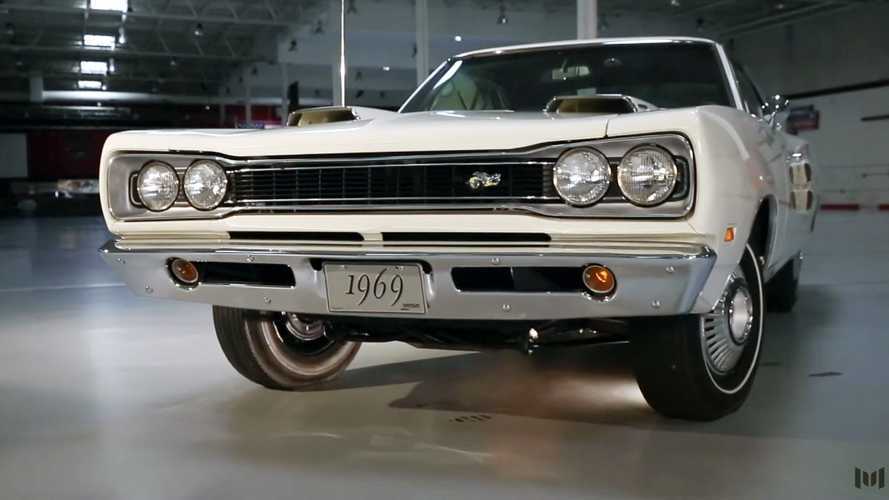 It's believed this is the only white-on-white four-speed Hemi Super Bee made in '69!

There are Hemi-powered Mopars, and then there's this 1969 Dodge Super Bee. We've already had a look at this immaculate Hemi Super Bee before it's auctioned off later this month through GAA Classic Cars, but this video offers an even closer glimpse of what is believed to be a true one-of-a-kind Mopar.

As if a 1969 Dodge Super Bee wasn't special enough already, this one is packing the legendary 426 Hemi engine, and it's paired to a manual transmission making it one of 92 four-speed Hemi Super Bees ever made. Where this particular Mopar really stands out is its white-on-white paint job and interior, which is said to be the only such car to exist. On top of that, this Super Bee is also equipped with the Super Track Pack consisting of a Dana 4.10 posi rear end.

The Dodge Super Bee is based on the Coronet, and it was Dodge's version of the Plymouth Road Runner. This car underwent an exhaustive nine-year restoration that kept as much of the car original as possible, and even the replacement parts (hood and rear wheel wells) were sourced from a documented donor car. The numbers-matching engine is all original including heads, block, intake and carbs, and the entire car has just 10,000 miles on it! It's hard to imagine that there are any Hemi Mopars out there that are in better or more all-original condition than this rare Super Bee.

Restored back to factory standards by ABM Restorations back in 2014, this car is a Concours Gold and National first place winner at multiple events. Even more, it was picked as the Mopar's Top Eliminator in 2014, and it won the showcase "emerald" award and a gold award – with 997 points – at the Muscle Car and Corvette Nationals (MCACN).

Show Or Go In This 1965 Dodge Coronet Hemi Gasser