Place Your Bid On This Outstanding 1971 DeTomaso Pantera 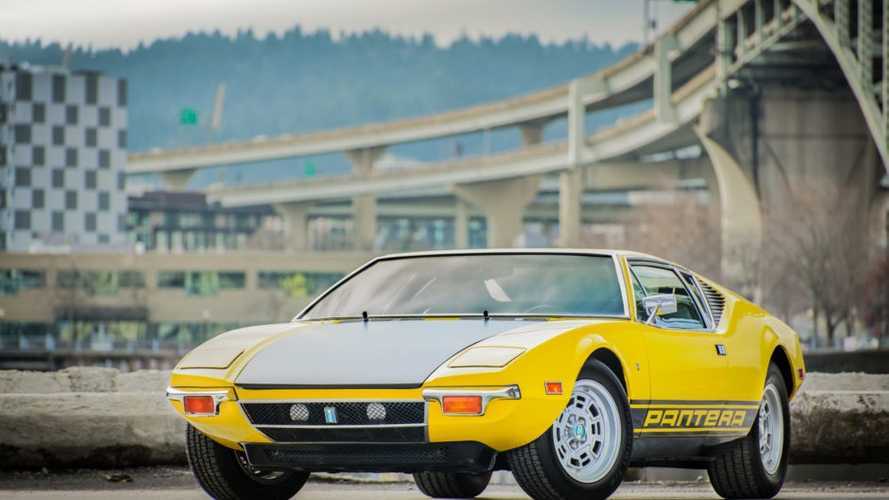 With the production life spanning two decades, the Pantera (Italian for panther) was introduced in the early '70s and offered stunning good looks, a mid-engine layout, and all-American beefy V8 power all for a reasonable price. Today, these cars have a cult following and meticulously kept ones are known sell for about ten times their original price tag. For anyone looking to snag one for themselves, Bring A Trailer is offering one stunning example of a 1971 DeTomaso Pantera. With a current bid of $74,000, be sure to place your bid on this beauty before the auction ends in two days.

This particular Pantera, a Pre-L example, was first acquired by O'Connor Lincoln-Mercury in Los Angeles, California, and then resided with the president of the Southern California Pantera Owner's Club for over two decades. The current owner has possessed the car just four years ago. Only 57,000 miles have accumulated on the clock with just 1,000 from its current owner.

Blanketed in a yellow topped with black accents that shines brightly after a recent detail complete with a wet sand and buff, this Pantera's exterior aesthetic demands utmost attention. Adding to the car's appeal is the Pre-L split chrome bumpers and quad-outlet exhaust complete with slash-cut tips. Further complementing its exterior is a set of factory 15-inch Campagnolo wheels wrapped with BFGoodrich Radial T/A rubber.

Powering this beauty is a mid-mounted 351cui Cleveland V8 engine that is backed by a 5-speed ZF manual transaxle with a gated shifter. Both the engine and transaxle were removed and detailed before being reinstalled. The engine was given a new air conditioning idler pulley, Pertronix ignition, new plugs and wires, motor mount pads, and a new timing gear with a double roller chain. While in the hands of the current owner, the alternator and carburetor were rebuilt and reinstalled. Even more, the radiator and metal cooling lines were rebuilt, and it was given new rubber coolant hoses. Also, the factory cooling fans were changed out for 850CFM pieces. Even the exhaust setup was refinished after it was removed from servicing the car.

Gallery: Place Your Bid On This Outstanding 1971 DeTomaso Pantera

Open the doors to reveal an immaculate interior complete with black leather upholstery. A vertically-mounted radio keeps the tunes playing, and air conditioning keeps the cabin nice and cool. Steering is controlled by a MOMO Prototipo steering wheel with a DeTomaso horn button. Veglia instrumentation monitors important vital signs with a 200-mph speedometer and an 8,000-rpm tachometer, along with four auxiliary gauges.

Work performed on the car since 2016 includes a Pertronix ignition system, new timing change, clutch, and tires. Suspension work done to the car include replacing the ball joints, sway bar bushings, steering rack, and A-arms. In addition, the brakes were given new pads and soft lines, and a rebuilt brake master cylinder and power booster.

This car has a clean Arizona title and a Deluxe Marti report that details the factory specifications including the factory colors and equipment, the build date, and ordering dealer. It even shows production numbers for Panteras that were offered and built with close specifications.

This '71 DeTomaso Pantera is now on consignment by a dealer in Oregon and offered on Bring A Trailer. With a current bid of $74,000, be sure to place your bid on this beauty before the auction ends in two days.