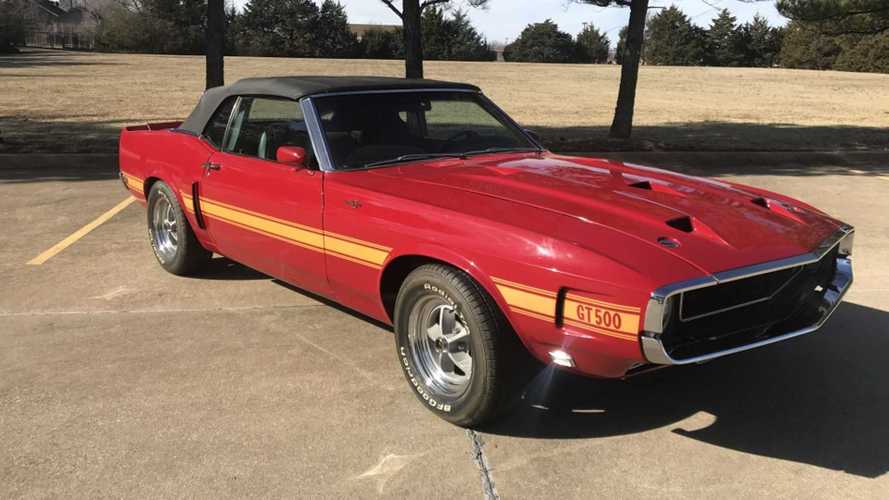 Proceeds from the sale of these seized cars will go to the county's district attorney's office.

The Pottawatomie County (Oklahoma) District Attorney is auctioning off six Ford Mustangs that were seized from an Oklahoma lawyer, Kermit Milburn, who was accused of creating knockoff Shelby Mustangs tampering with Mustang VINs and knowingly trying to pass them off as legit Shelby models. Just days after being served with a search warrant in 2016, Milburn committed suicide.

Of the six seized Mustangs, two are Boss 302s and two are Shelby GT500 Convertibles, but it isn't known whether or not these cars are fakes. Because of this, all five of the classic Mustangs now wear state-assigned VINs even though each has its own Marti Report, and while the 2006 Mustang has its original VIN, it also has a salvage title.

All six cars are being sold at no reserve with the money going back to the Pottawatomie County District Attorney, and the live auction starts on February 8, 2020; online bidding is already live.

The nicest car of the collection is this Candy Apple Red 1970 Shelby GT500 Convertible. Fully restored examples of these cars sell for well over $100,000, and this one is already the front-runner of the collection with a high-bid of almost $18,000 as of this writing. Not surprisingly, this car isn't without its questions though as both the odometer and trip meter both show all zeros.

Like the Shelby GT500s, the Mustang Boss 302 are also incredibly valuable with prices that can approach the six-figure range. This 1970 Ford Mustang Boss 302 is a gorgeous example painted in Calypso Coral with black stripes and a decklid spoiler.

This 1970 Ford Mustang Boss 302 might be the only one of these classic Mustangs that differs from its alleged Marti Report. The report says this car was originally painted white, but today it wears a gorgeous coat of Grabber Orange. Again, it's impossible to say whether this VIN has been falsified to match the report or if maybe the car was repainted at some point.

Perhaps Milburn was about to get into cloning modern with this 2006 Ford Mustang GT wearing a Shelby GT500 KR hood and Shelby-esque wheels are rear spoiler. Fortunately, it's a little harder to clone modern cars and pass them off as legit, but the winning bidder of this Mustang could still get this cool-looking Mustang GT for quite a steal.

As high as the bidding has gotten on the completed Candy Apple Red Shelby GT500 Convertible, this roller project is up there too with bids already surpassing $15,000. This car is an intense project waiting to happen, but at least it comes with a fresh Gulfstream Aqua paint job and an interior filled with parts.

Although it's not a Shelby or a Boss, this 1970 Ford Mustang Convertible could also be a steal for someone looking for a Mustang project. Unlike the others, this one appears to be in original, unrestored condition, which lends a little more credibility to the Marti Report's documentation as a 302 CID V8 with an automatic transmission and black paint job.