This 1971 Pontiac Trans Am Has All-Wheel Drive 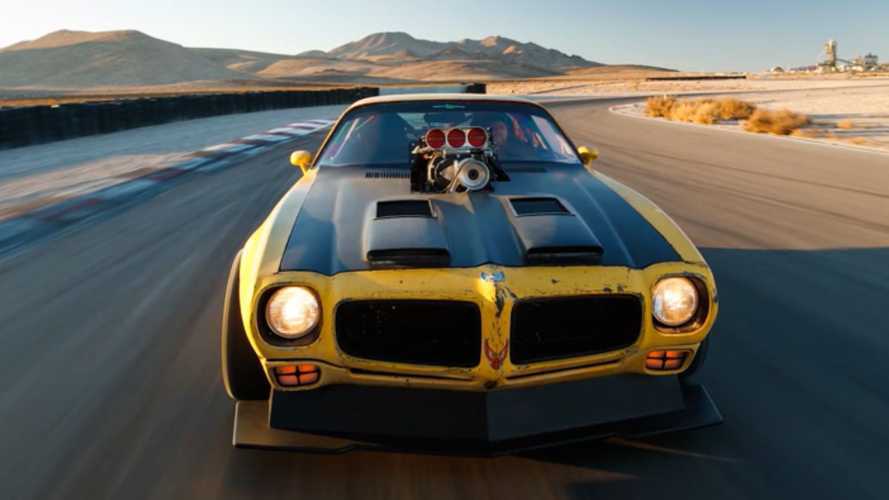 It also packs a nice supercharger.

Getting really excited over a 1971 Pontiac Firebird Trans Am might sound ridiculous, but that’s exactly what this car is: ridiculous. With a massive blower erupting out through the hood and an all-wheel-drive system donated by a Nissan Skyline GT-R R32, there’s absolutely nothing normal about this bird. Of course, this heavily modded muscle car is owned by a member of Hoonigan Racing Division, because who else is this crazy?

Just looking at this Pontiac, it oozes mean. The supercharger is large and in charge, plus the fact the crackled paint hasn’t been touched up gives it that kind of warrior appearance. Around back is the GT-R badge, and that’s when people will start to realize there’s a whole lot more going on than was apparent at first.

Examining the interior it’s obvious this car has been built for speed and definitely no comfort. It has a full roll cage, aftermarket steering wheel, and the kinds of controls you’d find in a racer.

Of course, the guy who owns this car is Ken Block’s lead mechanic, so he has some experience with racing. This Trans Am sounds seriously mean as it rips around Speed Vegas in the video, and from the expression on photographer Larry Chen’s face, it pulls hard at WOT.

Even more amazingly, this car was thrown away, left on a property in Nevada and possibly had a river running through it at one point. The motor is from a junkyard and originally came from a Chevy Silverado. Thanks to aggressive tuning and forced induction, it could be putting out somewhere around 600-horsepower.

This video just goes to show that to make a great car you first need an original, captivating vision. Sure, having mechanical know-how helps, but without some imagination it doesn’t really come together. So go out and make your crazy build, instead of sticking with the safe stuff plastered everywhere at shows and cruises, because in the end if you don’t have some guts you don’t get the glory.