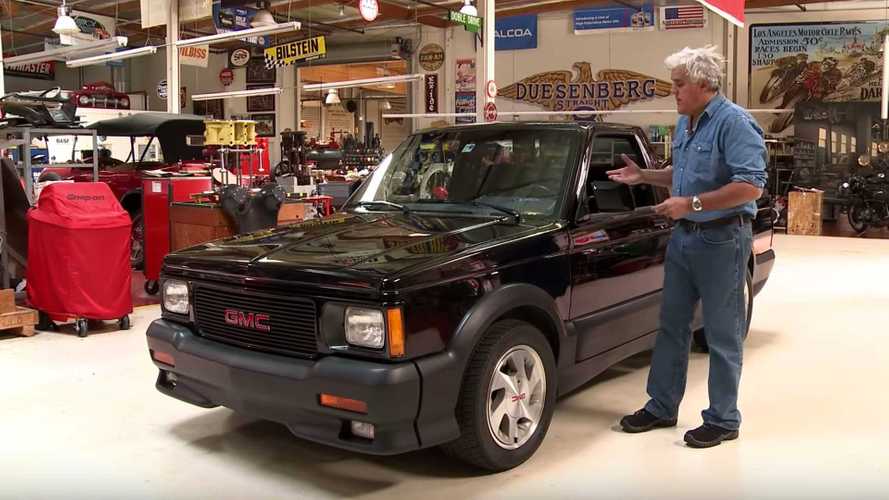 Jay Leno brings out his 1991 GMC Syclone pickup truck to give us a tour. He purchased the sporty pickup brand new back in 1991, and it served as his daily driver for many years. Only 2,998 of these power-packed trucks were built total with the majority built for the 1991 model year and with only 3 built in 1992. The main reason Leno purchased the truck because it could beat the Ferrari 348. It could beat pretty much any production car at the time, even the Corvette and Testarossa. In fact, the Syclone was the fastest-accelerating production vehicle in America when it was introduced.

These powerful pickups were only offered in black, offering a sinister aesthetic to match its performance. For the 1992 model, GM planned to offer more exterior colors but production was canceled before they could get that far. The Syclone sits on a set of wheels that resemble the ones offered on the Corvette at the time.

Many believe that the pickup is stuffed with the same 3.8-liter turbocharged V6 engine used in the Buick Grand National, but under the Syclone's hood sits a larger 4.3-liter LB4 V6 engine backed by an automatic transmission. The Syclone was given a water/air intercooler as opposed to the Grand National's air intercooler, so the pickup was quite a bit faster. And with four-wheel-drive, the Syclone hooks right up. With everything combined, the Syclone produces 280-horsepower and 350 lb/ft of torque. Although, 280-horsepower was the rating given by GM at the time, the truck was said to make even more at about 330-horsepower. The potent pickup sprints from 0 to 60 miles per hour in the mid four-second range, and conquers the quarter-mile in 13.4 seconds at 98 mph. Stopping power comes from disc brakes up front and drums out back.

Peek inside the car to a velour interior that screams early '90s. The pickup wasn't stripped down by any means and still featured creature comforts such as air conditioning, power windows, and power locks. In addition, the truck came standard with an AM/FM radio that played tunes through a premium sound system.

If you were in the market for a truck just to haul things around, then the Syclone wasn't for you. Basically a sports car disguised as a pickup truck, the bed could probably hold about 500 lbs. maximum. Back in the early '90s, these trucks sold somewhere between $25,000 and $26,000. While that may not seem like a lot today, back in the early '90s that was a nice chunk of change. Nowadays, you will likely have to pay about $10,000 or more for one of these.

If you wanted the performance of the Syclone but had a family to haul around, GM offered an SUV version called the Typhoon. Although not as lightweight and potent as its pickup sibling, the Typhoon was still a force to be reckoned with. And instead of seating just two, the Typhoon could fit 4 to 5 people and was more practical.