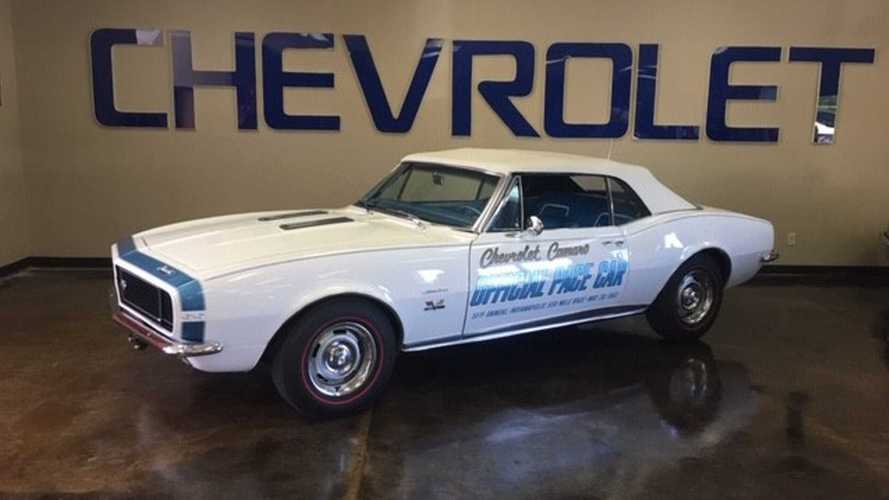 This example might be the rarest of the Pace Car examples.

Chevrolet and the Pace Car program have pretty tight knit relationship. GM vehicles have been used as Pace Cars for the Indianapolis 500 dating back to the starting days of Indy, and continues to be the most popular moniker to lead the race in modern days. Alongside the actual cars that were used to lead the cars around the track, GM also produces special edition production models so anyone can slide behind the wheel and lead the pack.

Because of the significance and popularity of the Pace Car program, these cars became instant collectibles. Cars like this RS/SS Convertible 1967 Chevy Camaro Pace Car rise even higher on the list of desirable muscle cars due to its Pace Car status and its desirability as a first-generation car.

In 1967, Chevrolet released this Camaro Pace Car edition with Ermine White paint with a blue nose stripe, blue pinstriping, and graphics on the doors identifying it as a Pace Car. To contrast the exterior, the inside of the Camaro sports a Bright Blue interior - which is in pristine condition on this particular example.

Not all of the cars came with such desirable trim as the L78 optioned car, but this one is powered by a meaty 396 cubic-inch engine, which is paired with a four-speed manual Muncie transmission. The engine is rated at 375-horsepower, and reports are that only five of such equipped examples were made, according to the Pace Car Registry.

Other options include tilt steering column, console with gauges, power front disc brakes, power steering, AM/FM radio, and red-line wide oval tires. Numbers indicate the correct Norwood Assembly Plant (Nor), and the date indicates that it was produced in the spring of 1967. It currently has the correct date coded 1967 L78 396/375 HP engine with the correct Camaro code stamp. This is a very rare opportunity from Tom Mack Classics to own a piece of irreplaceable automotive history.